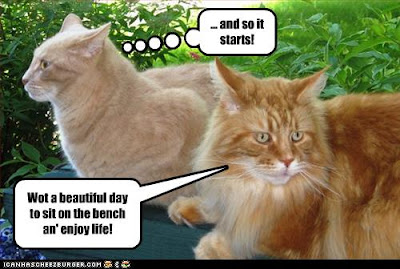 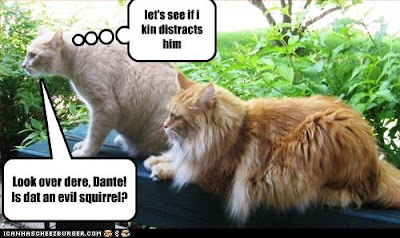 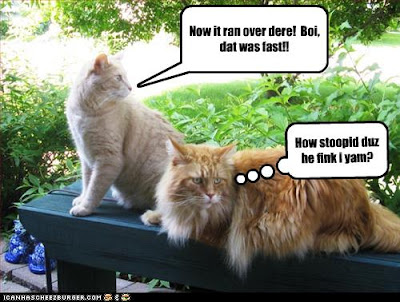 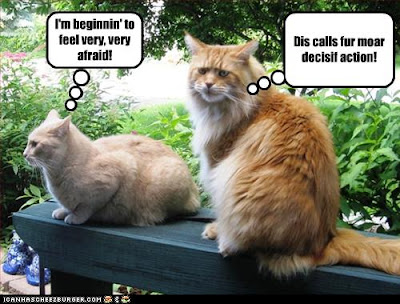 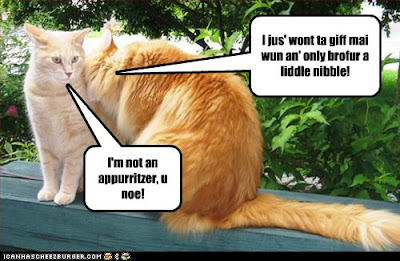 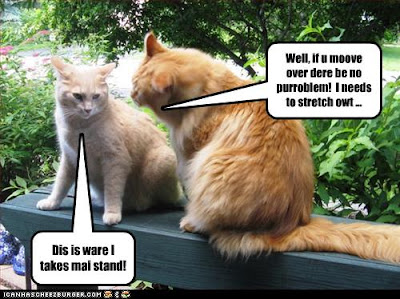 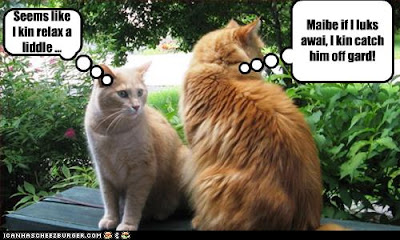 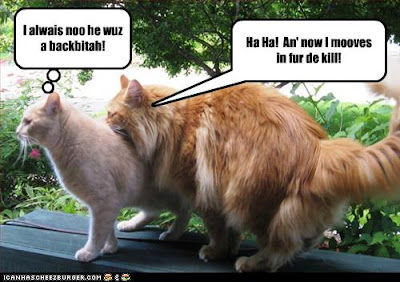 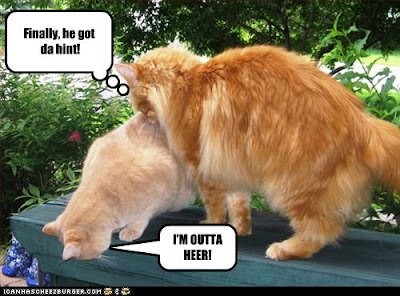 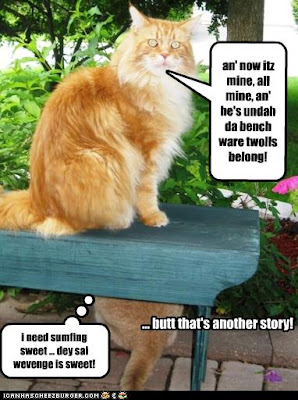 Would that I could say that Dante and Dylan, my two mancats, always get along fine.
Fur the most part they do, it's true. However, the hierarchy was long established by the time that Dylan joined the furmily. Domino had already claimed top spot, and Dante accedes to her. So, Dylan had little chance against his much larger brofur, and in general, he goes along with whatefur Dante wants.

Sometimes, Dylan gets a little testy, but finds it's just easier to walk away and give some comeuppance another day.

So, from time-to-time there are little squabbles between the male kitties -- they actually wish they had them more often. After all, what are squabbles, but tiny squab -- and we all know how tasty those can be!

I hope you enjoyed the little kit-4-kat that went on this Mancat Monday, even if it was a little one-sided. No one efur said life was fair, even when it's a beautiful day!
Posted by CCL Wendy at Monday, July 13, 2009

Mancat squabbles are kind of fun to watch. They are both dreamy.

"Twolls" What a crack up.

Sibling rivalry! We did a post in a similar vein today!

We love the little nibble picture! You boys are so cute!

Haha! Dante got his place to himself in the end. We are both pretty even. Neither is truly dominant which is probably because we are birth brothers. Sometimes if Eric wants my spot he will flop down on top of me and if that doesn't work, he does his mancat thing and gets on my back and bites my neck. If I want Eric's spot, I bite his ears or paws when he is asleep. Mostly we sleep or sit together.
Flynn

We wrestle and rumble everyday, but that doesn't mean we aren't best buddies!

I (Gandalf) have always been the Alpha Male since day one, and I was only 3 weeks old to Grayson's 1 year old. Grayson has always been content to let me have it my way. I think that is one of his best qualities! hehehe.

The GR8 thing about mancats is they have a little squabble, tussle a bit and FURget about it a minute later and are BFFs again. My girls on the other paw- hold grudges fur years!

Dante and Dylan are both fabulously handsome mancats!!!

Oh, that was such a cute story - I understand Dante's frustration with Dylan, but I think Dylan was good to at least try to stand his ground, even though it didn't work out in his favor.

Oh, and thanks for featuring us on the LOL Spot - so COOL!

Ellie does that to all of us when she wants our spot. She just stares and nibbles until we leave.

The battle of the dudes! So cute

Hahaha! We've been there! I usually annoy Wally so much that he just leaves!