Yes, it's that darn evil squirrel AGAIN!!! I must admit it's becoming a run-of-the-mill thing for me now, as it is just about a daily occurrence at my house -- at least in my yard.

For Dante and Domino it's more run-for-the-kill, though they haven't yet succeeded in that regard. Dylan purrticipates in this event as well, though he does not appear in today's documentary.

Domino was just minding her own business, sitting on the bench, having a nice bath, when squirrelly appeared behind her. It took a moment for her to "catch on", so to speak! Even then, she didn't move a muscle, but stayed deathly still while the cheeky beast came closer and closer. Sometimes, I think it provides even more amewsement for the kitties just to watch, rather than prey.

Then Dante got into the act! At first he was content just to lie back and wait, but he did give chase on this occasion as you can see from the blur of orange in the one action shot. Once again, the squirrel loves to play games -- I think it's as much fun for him to see how close he can get without being attacked. Sort of like a game of chicken, but this is a game of SQUIRREL!!! I must admit that I play a big role in this game as well, because I am the one who baits the squirrel by sprinkling peanuts randomly around the front yard (I just sit on my bench and throw a couple of handfuls and they land where they may!).

Squirrelly is relentless, and if at furst he doesn't succeed, he tries and tries again until he snatches up a nut and runs like the wind. It can be a real obstacle course from the squirrel's point of view (my kitties being the obstacles, of course).

Anyway, the pictures pretty much speak for themselves, as they are taken in a play-by-play sequence.

For those of you who keep remarking on the blackness of the squirrels, they are very common in these parts, which is eastern Ontario, Canada. We also have gray ones, brown ones and some red ones, but mostly black in my neck of the woods. Obviously in the suburbs (I lived in a wooded suburb), the squirrels become quite tame because more folks are likely to feed them. My squirrels are very demanding when they see me and will stare me straight in the eye and keep approaching me until I release the goods.

So, everyday expurrience or no, I guess it's not just the kitties that are in possession of the squirrel obsession!


P.S. There is a new feature on the LOLSpot today titled "Smitten with Kittens". All of these kittens are family or furiends of CB folks, so take a look and see what the wee ones have to say fur themselves! Just click on the LOL Icon, second from the top on the left hand side of this post to go to Wendy's LOLSpot. 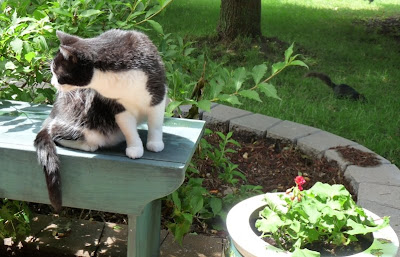 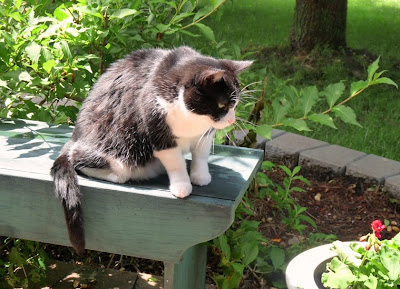 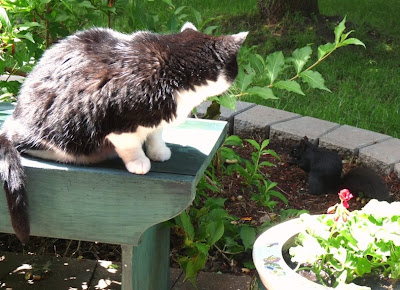 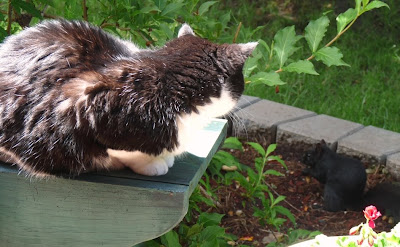 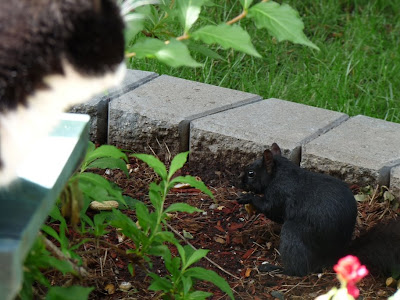 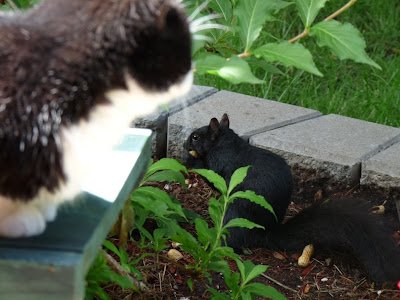 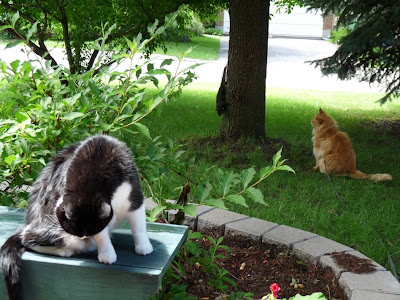 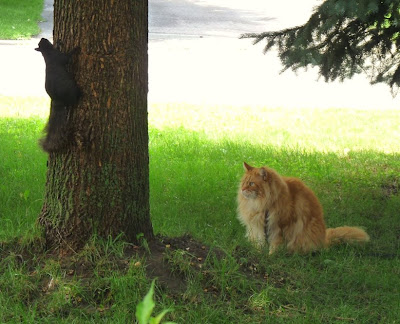 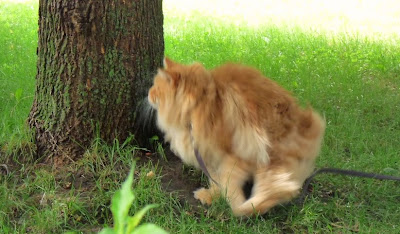 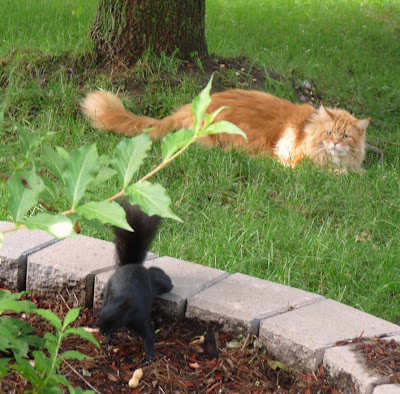 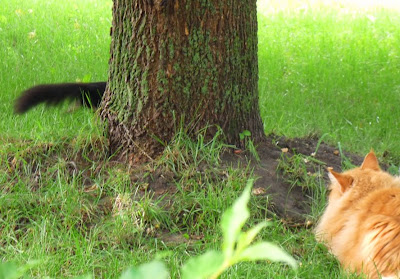 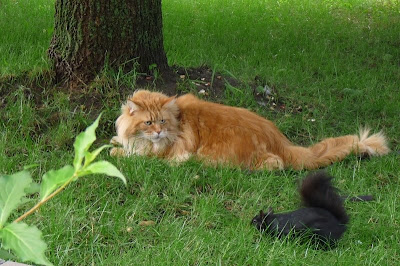 that is a good picture trail. They are very close together!

Black squirrels? I've never seen any of those. They are brown in SC.

The squirrel is very cute and Domino and Dante seem to be tolerating him ~ like they're making friends! Mom said it's good to make friends wiv other species and be tolerant. (unless they are dinosaurs)
Alfie xx


Hi Dommy ~ you look gorjuss. I'm gonna try and fy over to see yoo on my boogie mat later (afta Mom's gone out to see our noo baby cousins).
Love and smooches from Milo xx

We have only grey squirrels. There used to be reds but they got over run by the greys.

That squirrel is very close. We wouldn't be able to wait long enough for it to get that close. Does Dante ever go up the tree after it? I climb right to the top when I am chasing, but then they jump from the very small branches to another tree and I can't follow.
Flynn

Wow! That is one brave squirrel! You were very restrained not bopping him on the head.

That squirrel is Basement Squirrel- the evil henchman of Basement Cat... trying to insight the 3-Ds to riot!!!

I think that black squirrel is awesome... I can't get over how BOLD he is!

Like Eric and Flynn's momma said we have gray & red and then a hybrid of the two... and I lot of them seem to be the hybridization these days...

We have lots of squirrels here too...all different colors like you...we've been seeing more black ones lately...we can't believe how close those squirrels let you get to them...we'd be chasing them for sure...if only we could get outside to do so...

Dante is such a catly mancat! We love that expression on his face in the last photo. That squirrel better bring his A-game every single time or else...

Yay yay yay! Yoo can copy me!!! What's a squirrel?

Whoa! Dante, that last photo of you and Evil Squirrel SO CLOSE is making us all, er... squirrelly!

I think that last photo of Dante and the squirrel is fabulous.

oooh! I like your style, fur sure. Squirrels with a light cream sauce and pinenuts are right up my alley! Thanks for visiting my blog today, and all your helpful advice- my human really appreciates it! Thanks!

I really cannot believe that the squirrel is that crazy! He is just asking for it! I think that Dante and Domino must just like playing with him because I am sure they would have gotten him by now if they really wanted to!