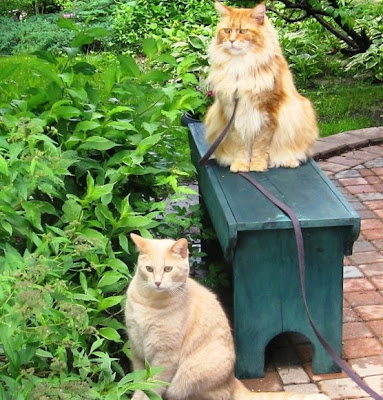 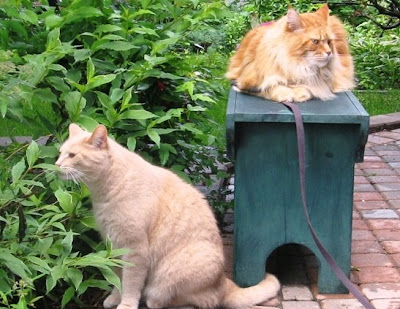 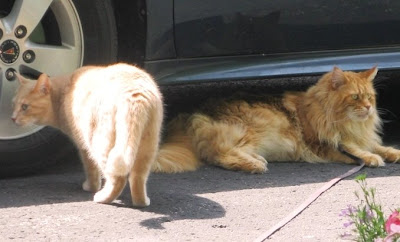 Another Monday, and Dante and Dylan are demonstrating, yet again, what it truly means to be a "mancat". Here they are guarding the entrance to our propurrty. Dante stands on the bench in the purrimary position so he can see further down the road to detect any early signs of invasion. Dylan takes the ground-level view to scout for any low-lying encroachers. You will note that after they survey in one direction, that they then turn to look around to make sure that all purrimeters are secure (and maybe take just a second to smell the flowers, too!).

Not satisfied that they were thorough enough in their surveillance, they shift to the driveway in order to see what may be on the horizon on the opposite end of the street. Dante checks in with Dylan to ensure that he is purractising due diligence, before they scrutinize all angles, once again. They certainly aren't ones to shirk their duty.

So, this is another lesson in what's it's all about in the world of a male domestic feline. The mancat must nefur let down his guard. He is efur-viligant and holds ready to defend his home, his propurrty and his humans.

The mighty Dante and the indomitable Dylan stand tall and purroclaim purroudly "We are Mancats, hear us roar, We're just two much to ignore!"
Posted by CCL Wendy at Monday, July 06, 2009

We can learn a lot from Dante and Dylan ~ they are superb at carrying out their mancat duties.

Your Mom must feel furry safe with the two of you on guard!

Nothing is gonna get by you two!!

You two are wonderful Mancats and protectors of your home!

No need to worry when you boy are on patrol!

I'll bet you all sleep peacefully at night knowing the ever vigilant mancats are on duty.

Dylan seems very interested in something. he takes his job seriously.

You haz encroachers?! They must not be very smart to mess with you two on Mancat Guard Duty!

Such mancatly duties you has! Your momma is sures to be very proud of your guarding abilities!

I'm on guard duty too! A ManCat's work is never done!

How lucky your Mum is that she has you two extremely handsome and regal mancats to guard your propurrty!

That first photo is extra sweet

Mancat Monday and Dante has anoFUR apPURRance on Cute with Chris... Dante you are legend!!! Dylan you are too hawt too... and you both are diligent family guard mancats as well!!!

Excellent job from both the mancats - they are wonderful role models to all the future mancats out there!