TUXY TUESDAY: A TUXY DATE WITH MILO AND DOMINO

It's been a while since Domino and Milo have been on a date. Last we heard of them, they had a very romantic encounter in Devon, where they toured a local castle and had a romantic candelit dinner alfresco. Their relationship reached new heights in many ways. Since then, Milo has encountered numerous flight delays and cancellations. He was attending his brotherbean's wedding this last weekend, so family duty called.

Now it is Milo's turn again to follow his heart to Ottawa, Ontario (which is the capital city of Canada) where his lady love, Madame Domino Coquenard dwells, and is waiting for him with baited breath (yes, she ate a few minnows -- all the better to entice milord). There's nothing like baited breath to turn on a mancat!

On this visit, Milo and Domino have decided to check into our local castle, which is called "The Chateau Laurier". You will see the first picture of them standing outside it on a bright sunny day. The Chateau is right in the heart of downtown Ottawa, and also backs on the Ottawa River which marks the division between the Provinces of Ontario and Quebec.

The lovebirds (birds???) stroll down the street outside their Chateau and encounter "The Changing of the Guard" which is a daily tourist attraction during the summer months. All of the guards are dressed in bright red uniforms with Busby hats, very much reminiscent of their British counterparts in London, England. (Canada is still a part of the British Empire after all and loves its colonial traditions.)

Milo and Domino follow the parade down to the Canadian Parliament Buildings, where they watch the rest of the ceremony. Then they notice a Canadian Mountie on his horse, and stop to say hello! The mountie was furiendly, but the horse was even more NEIGHbourly!

The cuddly couple continued their sightseeing by taking a boat ride on the river, so they could see the Parliament Buildings from the other side. What a view it was! They were both very impressed with the Gothic architecture.

As the sun was setting, they came back to stroll along the Rideau Canal, which runs through the city. They can see their Chateau in the background, and head there just in time for dinner in one of the finest restaurants in town!

I won't give specifics about what they did next, but they were exhausted and retired to their room for some canoodling (that's what we Canadians do -- we canoodle!), and ultimately to sleep. Milo was scheduled to leave at dawn the next day.

As a memento of their mini-vacation, they had head shots taken of the two of them, connected by the word "LOVE" written in red. If ever a romance has taken off, this is one of them -- as well as Milo, who took off at last. His boogie-mat is wearing out with all the trans-oceanic voyaging, and he'll need a new one soon. 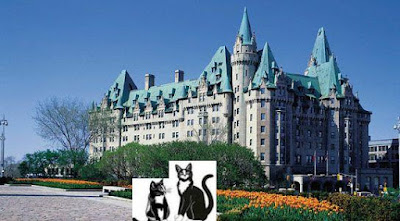 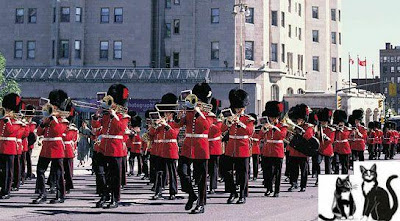 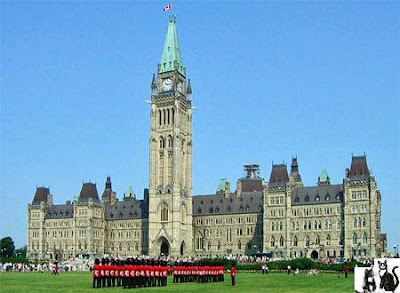 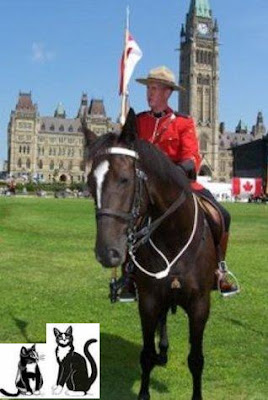 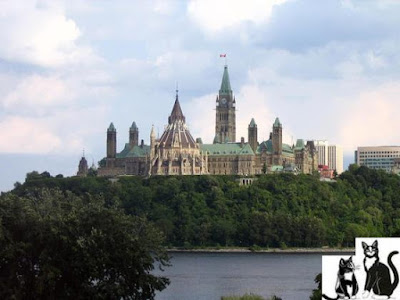 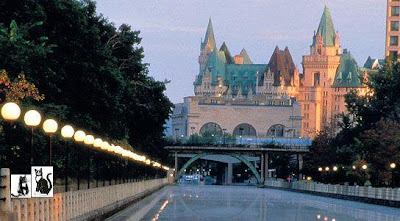 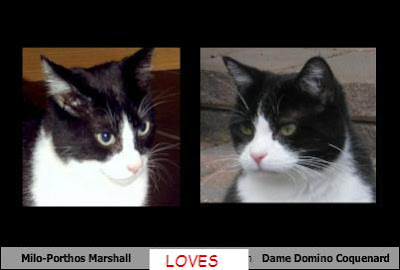 That was fun, what a pretty castle.

What a lovely trip!

Thanks for letting us know wot Milo got up to! He was very secretive and tired when he got back!!

What interesting dates Milo and Domino have!!

Oh they are so cute together! Such a great story!

What a wonderful time they had! 'Specially that canoodling stuff! Heehee!

Those are lovely photos. We are glad they had such a good time together.
Mum said when they were in Quebec last year, their hotel looked very similar to the Chateau Laurier.

Such an attractive couple... They are living the fine feline high life! We have to have one of those combined couple names for them... DOMILO!