For something a little diffurent today, I thought I would invite you into my dining room for dinner with some of my lady friends. If you recall, my husband and I are wannabe chefs and love to entertain on a regular basis.

First we started with an oriental salad of romaine lettuce, spinach, bean sprouts, julienned red pepper, cucumber, and green and red onion, with a sprinkling of toasted sunflower seeds. This was dressed with the famous "Benihana" ginger salad dressing (you can find the recipe online). It has no less than 13 ingredients, and has lots of body from the minced onion, celery and fresh gingerroot. Everyone was commenting on the wonderful taste and lightness of this combination.

My friend Renate is displaying the salad before digging into it in the first photo.

The main course was barbecued chick-hen and honey garlic ribs (which were baked in the oven). My husband, Walter, like most men likes to take charge when there's barbecuing to be done. He put the chickens on the rotisserie and basted them with a simple solution of balsamic vinegar and soy sauce. It helps to colour the skin nicely and adds just a hint of flavour. Walter has the timing down pat and the chick-hen always comes out so tender and juicy. I made a BBQ sauce for dipping, as well, but some of the ladies preferred the unadorned taste. The BBQ sauce recipe is a little diffurent in that it calls for Coca-Cola as the sweetening agent! It's very yummy and has a real kick from some of the added spices.

The baby back ribs were marinated and then baked in a honey garlic sauce which I made from soy, oyster and hoisin sauces combined with fresh minced garlic and honey (with a little cornstarch for thickening). Once again, we have the timing down to a science and the ribs also turned out to be quite juicy and succulent.

We served the chick-hen and ribs with a little rice pilaf flavoured with red and green onion and garlic. You can see my friends Val and Susan smiling over their dinners. It's funny, but people always seem to smile like this at my dinner table! I wonder why!

Renate, however, had a big frowny face because unbeknownst to me, she is allergic to anything shellfish, and I had added oyster sauce when making the ribs. I gave her one to try, and as it turned out she had a couple more later without any untoward reaction. Val said that sometimes oyster sauce doesn't even have oysters in it -- so, go figure!

Renate was kind enough to supply the dessert this time around, and she made a downhome favourite from the Maritimes -- a blueberry, crumble cake with fresh whipped cream. It was very, very yummy! It has a hint of lemon in it, and was warm and delicious and to-die for!

And finally, we had Dante come join us for dessert. You can see him enjoying his daub of whipped cream on his dessert plate. He also joined us earlier for some chick-hen, but that picture didn't turn out. He likes to sit on one of the spare dining chairs and stare at you until you give him food. Dinner wouldn't be complete without his floofy presence.

Anyway, we ended it all up with some nice hot tea, and a movie afterwards. It was a lovefurly evening for all involved. Domino curled up on Val's lap and then Renate's (she's an equal oppurrtunity kitty) and Dylan made the rounds headbutting everyone's feet and trawling for pats. Efurryone had a good time and left feeling very full and happy! 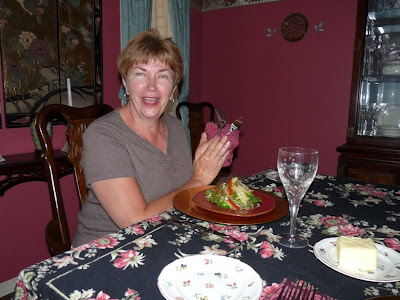 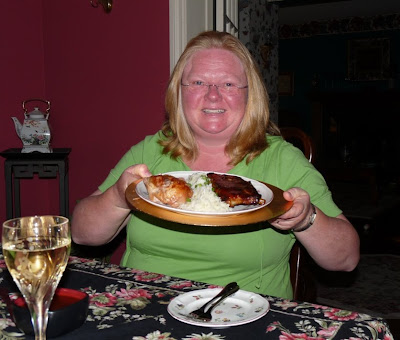 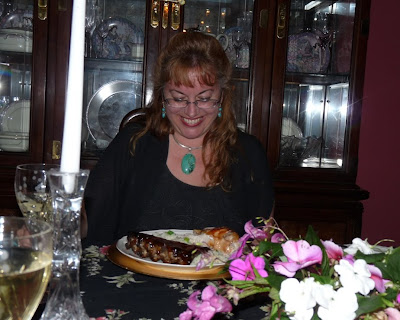 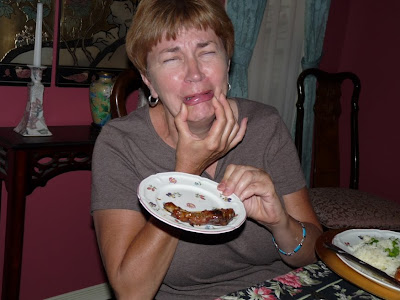 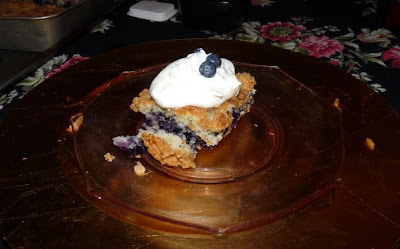 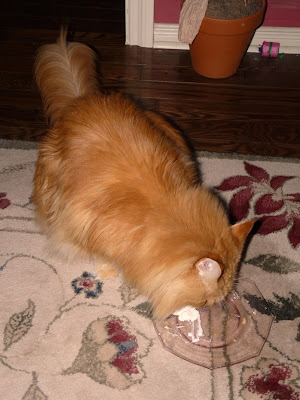 OH YUM Wendy! Looks delicious! What a nice gathering you had and of course the kitties enjoyed it too! My guys LOVE whipped cream out of the can!!!

Cream for the cats - what a great ending. Sounds delicious all of it. My hubby is a chef but doesn't like to cook much at home :(

Oh that sounds just wonderful! I wish I lived in your neck of the woods ~ I'd been round in a flash if I was invited.
Have you ever done the meme: My Fantasy Dinner Party?
You make out an invitation list saying who you would invite and why ~ you can select people you don't know and have always wantd to meet ~ or famous people (film/pop stars, politicians, writers, poets, artists, etc)
Then you write your menu, including wine preferences.
I did this meme ages ago and included photos of my guests (I got from the Internet)~ it was fun.

Miss Camille Suzanne ♥s to lick on whipped cream. She says that is what helps her to keep her lovely, white coat so pristine!

That looks like a lovely meal with good friends.

Oh we are all very hungry now!

Yum. You had Mom and Whitey at "Chicken" and you had Gandalf and Grayson at "Whipped Cream"!