These are pictures from the latest visit from Grampaw, who is my husband Walter's father (also named Walter). This was a significant visit because this is the first time Grampaw has been to our house since his knee replacement surgery, and subsequent move to a retirement home (not too far from us). Walter, Sr. has just recently turned 86 years old.

He is healing very well, and is determined to get up and go, though he's still using a rolling walker for assistance. Grampaw's memory has deteriorated rather badly over the last year, so he wasn't always quite aware of what has been happening to him. Some days he knows, and other days he doesn't. Despite this he is quite cheerful.

You can see how much joy Grampaw gets out of the kitties. He never had a pet growing up, neither did my husband, though he has since been turned into a Crazy Cat Man (like it or not)!

Grampaw gets a big kick out of playing with the kitties with a feather toy. He doesn't really know how to do it, though, and was having fun wrapping the long boa around Dylan's neck repeatedly! Dylan was quite patient and allowed Grampaw to do this as much as he wanted. Fortunately, Grampaw eventually caught on, and dangled the feathers more tantalizingly.

Grampaw has absolutely no idea about what cats want or need -- because of course he never had any prior experience! Once, for a gift, he bought Dante a little pewter clock shaped like a cat, and expected him to play with it! The thing was fairly heavy and not predisposed to being batted about. Dante just stared at it, and Grampaw said "What's wrong with you -- you must be getting old!".

Happily, my kitties get some nice pats out of their Grampaw experience, and Dante is actually quite fond of his "Grandfather". Dante insists on calling him by this formal appellation, and he knows who I am speaking about when I tell him his "Grandfather" is coming over!

Dante and his Grandfather even have a ritual which is repeated upon every visit. Gramps starts to give Dante a pat on his head, and Dante points his muzzle at Grandfather's face and is rewarded with a kiss on his nose. This is remarkable considering that this man never liked cats before in his entire life!

So, anyway, maybe you can see some of the joy that they bring to each other -- my kitties and their Grampaw! Domino was in on the visit, too, though she was napping out of view of the camera. Sometimes Grampaw gets very confused when he sees all three cats at once -- he's always asking if we got a new one. And he thinks that Dante grew much bigger since the last time he saw him (only a couple of months ago).

Nonetheless, a good time was had by all -- and Grampaw got in some quality furmily time, complete with kitty kisses! Bye, bye Grampaw (er Grandfather)! See you soon!

P.P.S. I have just posted Part II of our visit with Mr. Grumpster Wilfred III on the LOLSpot. To check it out, just click on the LOL Icon, second from the top on the left. 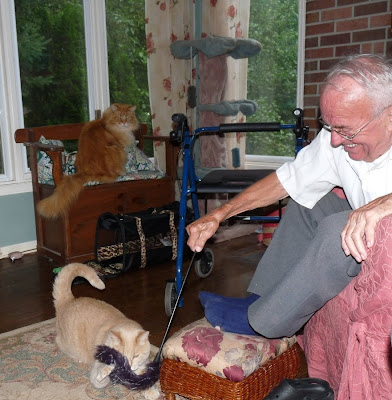 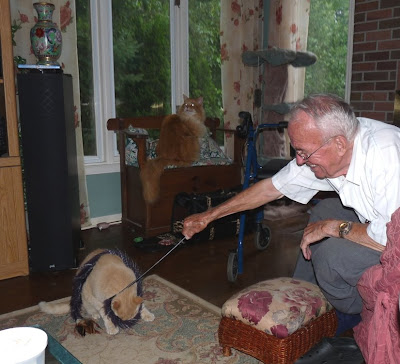 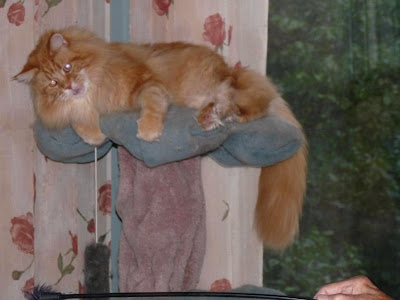 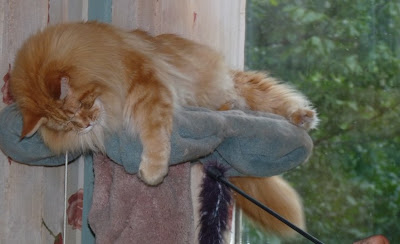 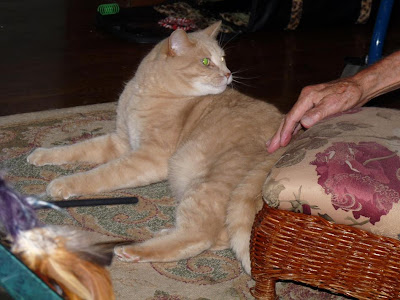 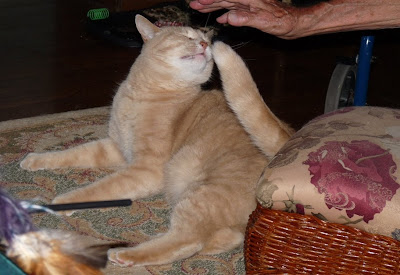 You are so lucky to have GrandPaw. Even if he does not understand he still communicates with with your babies. Every one shares the love!

It looks like Grandpaw had as much fun as Dante and Dylan did!!

The puddies are very good physical therapy for Gramps!

Grandpaw looks absolutely wonderful! We would never guess his true age! We love having our Grampy live with us now! He misses us something terrible while he's visiting our Aunties for the summer.

AWW!!! That's so sweet. Kitties bring out the inner child in all of us... even when we are senior citizens! Look at that bright smile on Grampaw's face! You can actually see the endorphins flowing! Wendy, those photos say it all. Sometimes older folks really can't have the responsibility for pets, but it's always GR8 to share ours with them!

Gramps looks really happy and like he is having fun! We cats are obviously very good for him ~ very medicinal.

PS: Dommy can you come over to see me on Monday? I've got a nice surprise for yoo!
Love Milo xx

We don't have a Grandpaw so we think that you are very and very and very lucky to have one even if he isn't quite sure how to play with your toys. Purr with him while you can...

Grampaw looks very happy playing with Dylan, and Dylan looks as if he is enjoying himself too.

It's so nice that you all got to visit with your Grandpaw!

What a wonderful story and such great pictures!
Yeah, we can tell Grampa isn't a cat person at all!!!!!

You boys look like you really enjoy your Grandpa and he looks like he's having a great time with you!

Awwwwwww.....those are such sweet pictures of Grandpa and the kitties!! You can tell Dylan and Dante love him, too! Happy World Cat Day to you all!
Your FL furiends,