3-Ds EASY ON SUNDAY: LOUNGING IN THE FOYER

Just as one might lounge in the foyer of a grand hotel, my kitties like to lounge in the foyer of our house. They love the area rug there, and have claimed it as their own. Unfortunately, they love it all too much -- they love to pull out little tufts of carpet with their claws, giving (what was once a relatively smooth surface) a rather shaggy appearance. All the better to lounge upon, I suppose!

In fact, the foyer at other times, is also used as an indoor kitty playground. It is one of the few wide open spaces in the house, and is generally littered with cat toys. When they tire of those, once again, they turn to the rug for recreational entertainment.

Since the foyer is right at the base of the stairs to the second story, the stairs themselves serve as a wind-up to the actual event. One at a time (or sometimes two),they run down the flight of thirteen at top speed (thundering herd of elephants, I believe is the correct term), leap on the area rug and slide it across the room as far as it will go. Generally, it ends up half-crumpled in the tiled entranceway.

However, today is Sunday, and the 3-Ds are just chillin' (two at a time) on the carPET! It does belong to them, after all!


P.S. There are five new LOLs of Ariel on her debut feature on the LOLSpot. To get there, just click on the LOL Icon, second from the top on the left of this post. 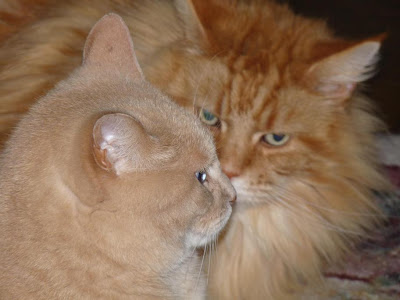 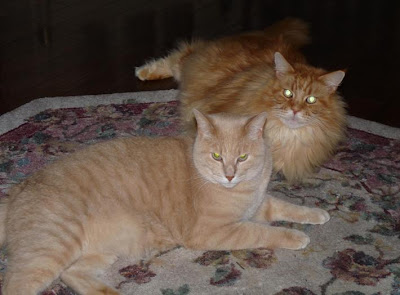 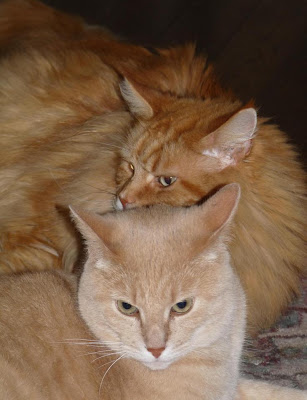 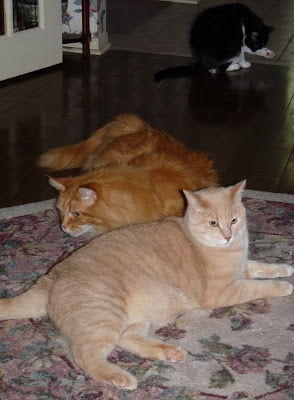 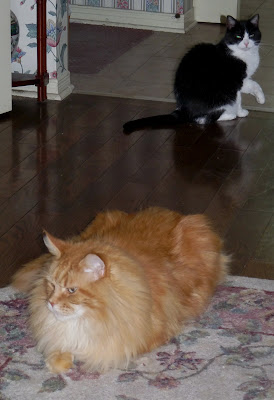 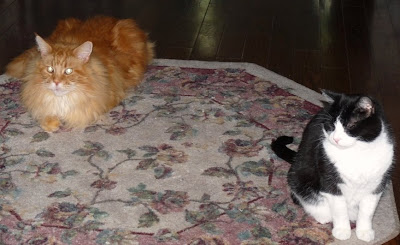 Dante and Dylan are so good looking together! Domino acts like she does not want to get close!

When we got our living room area rug, there was something about it. We never clawed any rug before, but we just all attacked this one. It now looks a bit shaggy too. It's the only rug in the house that we claw and we have not revealed why this one and not the others...

I can see that they really do claim that area as their own. Too cute!

We think it's nice that Dante and Dylan snuggle like that! Domino is busy keeping that white fur sparkling clean!

That sounds like a very good place to play.

We hope your Sunday was relaxing! It looks like it was

What a great place to lounge....'specially if a rousing game of THoE is just around the corner!!

Great fun ~ anything that includes THoE is fun!