Domino came out on her front step early this morning to look out on her domain. She has a scheduled flight to Sidmouth in Devon, England in just a few minutes. This is the home of her beloved Milo.

Last time Milo visited Domino he crashed upon landing, and she has been very concerned about him ever since, even though he made it safely back home again and was never injured.

Domino promised Milo that as soon as she had her pilot's licence that she would make the long trip over the pond to see him. Well, Domino became a CCFO just last week, and passed with flying colours (pun intended)! CCFO stands for Certified Cat Flight Opurrator, by the way, for those of you who haven't yet had your kitties trained to fly on their boogie mats.

Actually, Domino's licence extends to other kinds of mats as well, including area rugs, doormats, or any type of small carpet. Domino is very safety conscious and goes outside before her flight to test the elements.

First of all, however, she stops and pays homage to Kitty Buddah, and asks him to help her have a safe journey across the Atlantic. Then, Domino makes her way over to the front lawn to test the wind conditions. As she has her very own windsocks on all fours, this is easy for her to do. She stops there, briefly,to meditate and calm herself. It's a nice day, and there is nothing untoward in the offing. Domino keeps her sights on her mission, and Milo in her thoughts as he is the impetpuss (er impetus) for this voyage.

All is well, and Domino returns to the driveway, to look back on her home sweet home. She has never been so far away before, and is a little trepidacious.

Then, without further ado, Domino mounts her mat, places her paws in flight pawsition and utters the magic word "AbraCATdabra"! And she's off ...

To see Domino's romantic tryst with Milo in Sidmouth, go to the The Cat's Meow (Milo and Alfie's) blog. The love story is the second half of their Monday bloggery. You can get there quickly by clicking on the picture of Milo and Alfie at the top left of this post.

P.S. We have Pawt II of "An Angel and a Kirby" up on the LOLSpot today -- there are 11 new LOLs added since yesterday. Click on the LOL Icon, third from the top on the left to get there. 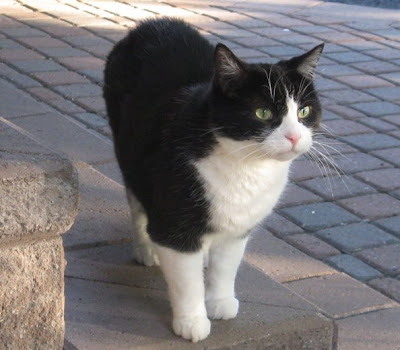 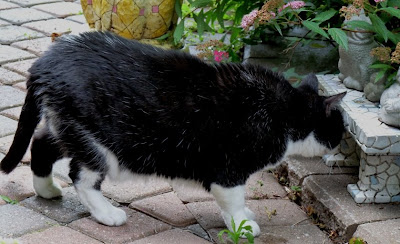 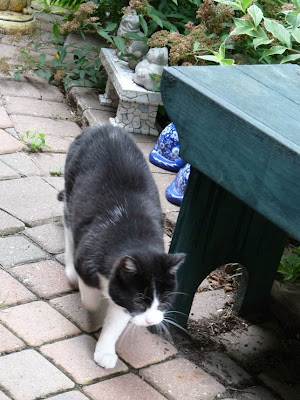 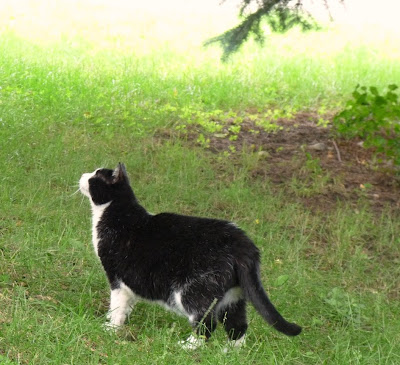 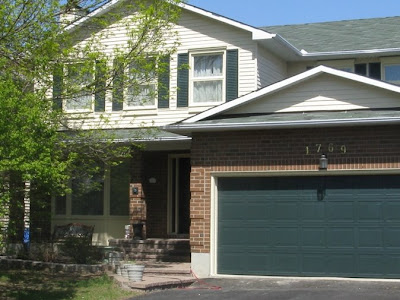 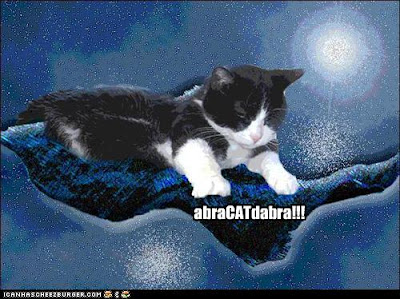 Thank you for the LOL's. We were having problems posting an har tp do a partial post. It is complete, now.

Safe journey Domino! We will purr for a soft landing!

Have a good trip Domino!

And she's off! Have a good flight.

Oh Domino! Who knew that you were such a talented pilot! That is quite the journey and I do hope that all goes well!

Dommy arrived safely (at the crack of dawn) here in England!

Bon voyage, Domino! You look very confident on your mat

What an exciting adventure, Domino! Have a wonderful flight!

Domino, you sure are adventurous! It must have taken a lot of studying to get your CCFO license. Have fun with Milo!

We hope you have a safe and fun visit with Milo.

We already read Alfie's report on Domino and Milo's adventure, and are glad that they had a good time. We hope she makes it home safely!

I need to sign up for that CCFO training! I keep crashing on my boogie mat! It probably doesn't help that I dive bomb under it all the time!

Hope you have a good visit with Milo!

Wendy, we'd love to be LOL Cats! Thanks so much for asking. You're welcome (and have permission) to use any pics from our bloggie, if'n you can find enough to make it worth it! MOL

Purrs and hugs to you,
The Kitty Krew (and The Mommy)

have a safe and wonderful trip Domino!!

WOW! Domino... what extraordinary powers you haz! Hope you had a gud flite!

Nice pictures of Dylan... was he nervous about Domino's adventure?