This is our neighbour kitty, Figaro, who I have introduced previously. Lately, he has been visiting on a daily basis, primarily for the snacks that I provide. If I don't have any at hand, he will patiently wait while some are fetched.

Dante has given up chasing Figaro and has just accepted him as part of the daily happenings.

On this occasion, I presented Figaro with some of the gourmet treats that came from Ginger Jasper in England. They are called "Prime Cuts" and are shaped like cuts of roast beef (but are really a chicken and fish combination). My kitties just adore them! Figaro on the other hand, tasted one, and then turned up his nose at the rest. He is very quiet and doesn't make his demands vocally -- he just stares at me with those beautiful yellow eyes of his -- not in a pleading manner, but insistent nonetheless.

Since I didn't run to fetch the more usual Temptations as he would have liked, Figaro moved on to what he hoped was more tasty fare. You guessed it -- the evil squirrel! You can see Figaro on his approach. At first he's looking rather nonchalant, but the part I couldn't capture, was of course, the chase! After staring down the squirrel, Figaro took off in its direction at top speed, and the squirrel narrowly escaped! His appetites being thwarted, Figgy then loped off across the street, back home.

The squirrel stood mockingly, and then decided to move on to its next victim -- you guessed it -- Dante! This squirrel really enjoys the thrill of the chase for its own sake, and if one kitty won't comply, he'll taunt another. But that's another story for another day -- just one more in this neverending saga. 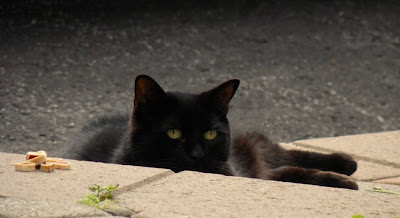 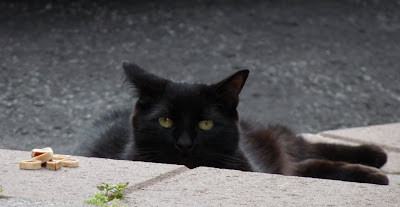 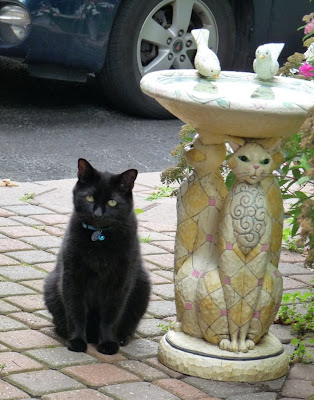 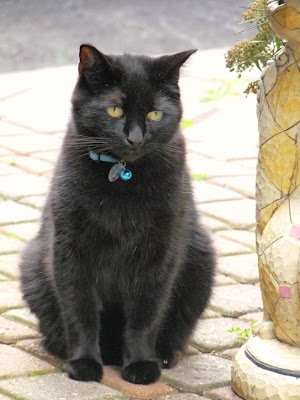 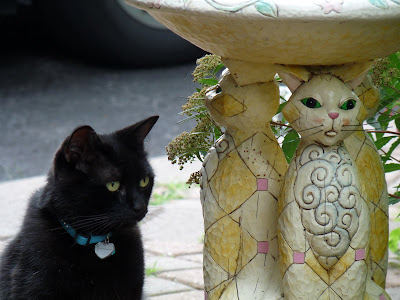 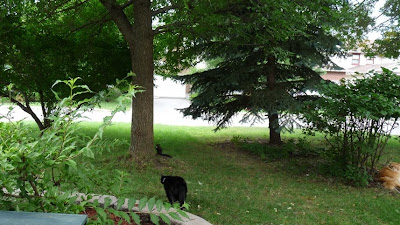 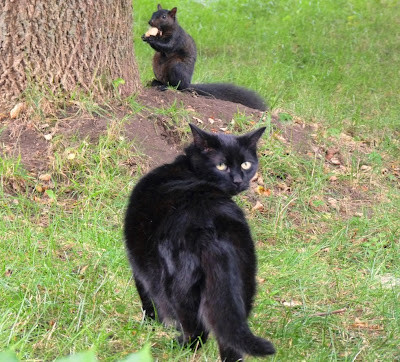 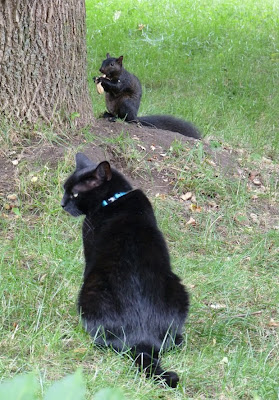 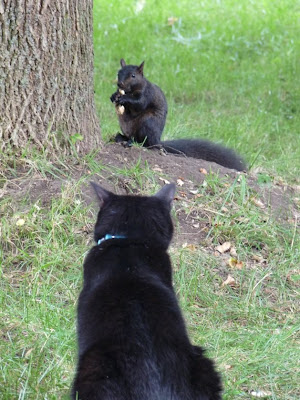 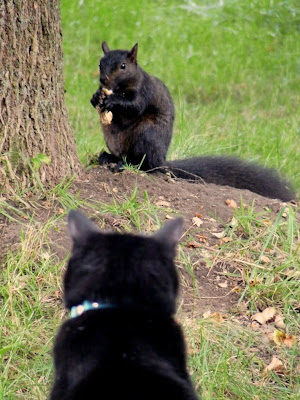 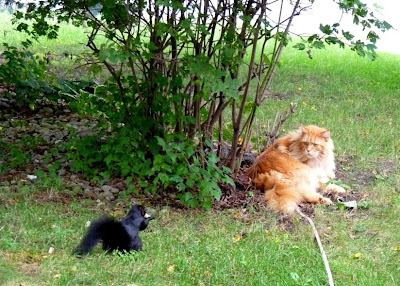 Figaro s a beauty! That squirrel's luck will run out some day!

Wow a black squirrel, we only had big grey squirrels. Figaro is a very handsome mancat. We love love love your kitty fountain.

We think der is sumfing furry furry wrong wif dat skwerrel. He must haf a deth wish...
Figaro is, um, kinda, well, not so svelt. We think maybe he is getting treats from more den one place.

Figaro and the squirrel match! Those kitties are all good at giving that squirrel the stink eye.

That is one brave or "stupid" squirrel.

We think that squirrel is living on borrowed time too ~ he'd betta watch out ~ 'cos there's a Dante about!

Figaro is gorgeous! We think that Evil Squirrel is getting fat enough to slow him down and use to our advantage... Time for a merry chase!

Hahaha! Figaro and that squirrel sure did have a good showdown. We like how Figaro looked back to be sure you were watching! Dante didn't look too inclined to play this time...

Figaro is such a handsome boy! The squirrel is such a taunter...even to Figaro!

That squirrel has some real moxie!