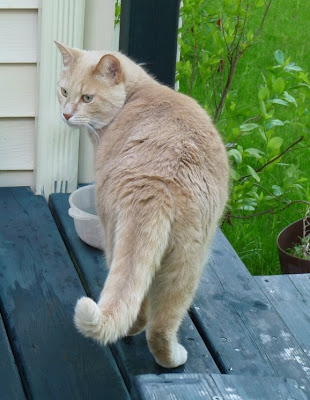 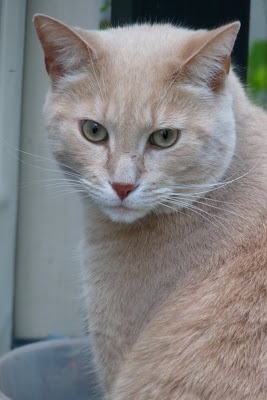 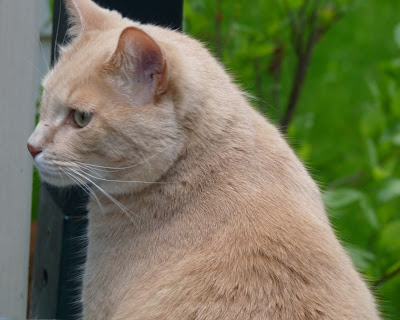 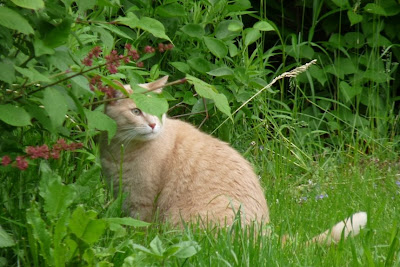 Here's Dylan, the Purrodigal Pussycat, in post-return photos taken in our back yard. I'm not worried about him running again, because I believe it was the collar and leash that freaked him out to begin with. Anyway, I noticed a small scratch on his nose, and furst concluded that he must have had a battle with another animal. However, after I thought about it more, I believe it may be from the buckle on the collar, as he was trying to get it off his head. We'll nefur know fur sure -- and certainly he may have been furry close by, but unwilling to come home until he was free of that infurnal contraption.

At least he made it back in time fur Mancat Monday!
Posted by CCL Wendy at Monday, June 01, 2009

Oh! You are so beautiful =)
My name is Jasmine, I hope we can be friends!

You are a good looking mancat but don't scare your Mom like that again!

Dylan, we know collars are No Fun, but that is not a good reason to run off like that! We are very glad you are home safe and sound.

Dylan sure is a handsome big boy. My Minnie hates collars, too--the one time I put one on her, she disappeared & ditched it somewhere.

Dylan, I must give you some strong words now: Do not ever, ever, ever do that again! It was very wrong of you.

I only say those words because I do not want you to get losted again! Because we would all be very sad.

Yes Dylan, we agree with Daisy and we are so glad you are safe at home again=^Y^=the Cat Street Boyz

Whew! I'm happy to hear you're back safe and sound!!!

I am glad that Dylan is home and everything is back to normal at your house. My cats are always indoors and I would be in a huge panic if they got out - just reading about it made my heart race (luckily I am a few days behind and had seen he was home!)

Break out the cat treats and have a big party!

Thanks for the birthday wishes. And don't worry about confusing me with Jan. That happens all the time. But, even though I'm a guy, I'm better looking.

Dylan, we have a Welcome Home Award for you at our place. Come on by and grab it!

G'day Dylan, we're so glad to see you home. Now listen to Daisy, and settle in and catch up on the snuggles you missed while you were away.

I hope Dylan won't scare us like this again! Just reading about it after the fact, made Keek's little heart skip a beat! It took me some time to calm her down and convince her that her Dylan was okay! We are both so relieved! Now she's talking about setting the actual wedding date!

We are glad to see you back again Dylan. Don't ever go scaring us all like that again, okay.

Dylan....we wish you could talk so you could tell your mom all about your adventure!

Dylan...nice to meet you! DON'T EVER WORRY US LIKE THAT AGAIN!!!! WELCOME HOME!