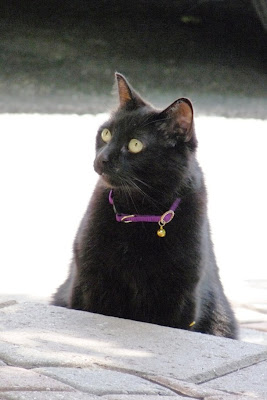 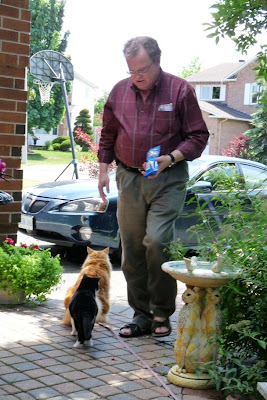 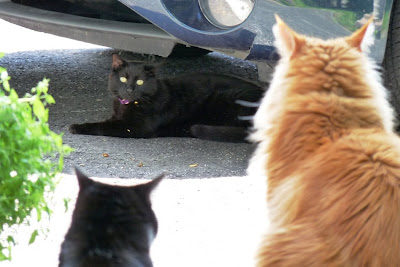 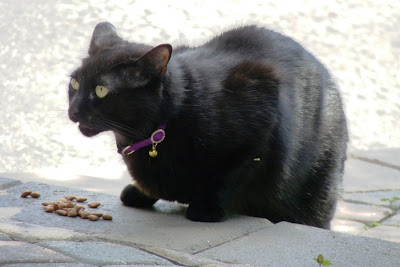 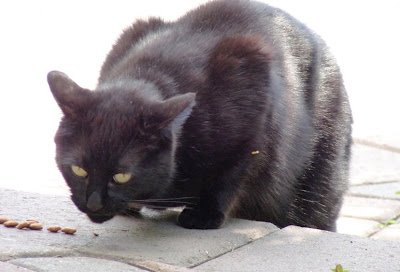 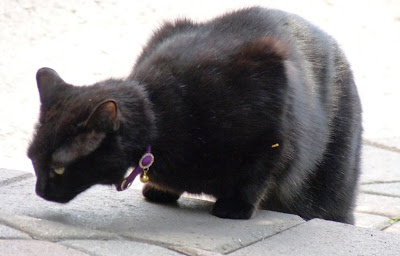 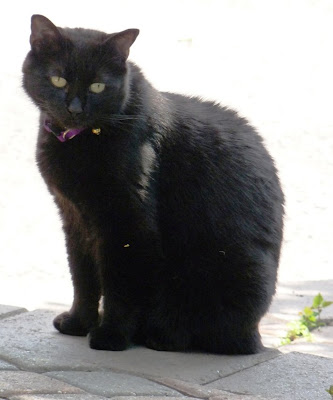 We'd like to introduce you to our little furiend and neighpurr kitty, Figaro. He and Domino are old furiends, and at one time considered marriage (The Marriage of Figaro) but the engagement was called off due to irreconcilable diffurences. (Note: It seems that Domino has a new admirer now, from Sidmouth in the UK.)

Dante likes Figaro and will accept him, but finds it amewsing to chase him from time to time, even though Figaro is loose and Dante is on his leash. It's an ego-thing.

Anyway, here you see Figaro at the bottom of our walkway staring at my husband questioning the whereabouts of the "Temptations". Though normally it is my job to fetch treats for kitties, visiting or resident, I was busy with the camera.

Daddy sprinkled treats for Figaro at the edge of the walk, and then Domino and Dante tried to coax Figaro back for a taste. You can see them welcoming Figaro before trotting off to purrtake of their own treat-feast elsewhere in the cat garden.

So now you can see the pantherish Figaro in all his glory. He quickly gobbles up the pile before him, and then looks around fur more. He's certainly not shy!

Figaro's folks always make sure that he has a collar around his neck, though we often find them strewn in our yard, as have others in the area. They must buy them in bulk or something! Figaro purrfurs to be unfettered.

Figaro normally runs from people he's not familiar with, but I have been fortunate enough to be one of the few that is allowed to pet him -- and I've even picked him up more than once, though he doesn't tolerate the closeness too well.

Farewell, furry furiend, until we meet (and treat) again!

P.S. Tuck is being featured on the LOLSpot today. To see "Tuck's Lollygig" simply click on the LOL Icon, second from the top left. See you there!
Posted by CCL Wendy at Thursday, June 25, 2009

Figaro is a very handsome panther! ANd looks like a good neighbor.

Ah, Figaro looks like a manly man cat. He doesn't likely let just anyone approach him, and a cat cannot pretend to like someone, so he must respect you greatly.

Figaro is a very cute neighbour! And Dante is such a gentleman

Can you pass on a message to Domino for me? I shall be flying over on my boogie mat later today for a photo session on the patio - and to play! Then I can put the picshure on my bloggie tomorrow! Send her my luff!

Does Domino haff a blog? Or do I contact her here?

It is a good fing ta be a good host an' hostess when furendz drop by. Temptations are a very good choice fur appetizers☺

Figaro is a handsome house panther! And it's nice to have somebody to share treats with...

MOL, hehehe, I likes how you both wents to tries to gets em to comes back closer fur da treats which he eventually dids!

Regarding your comment, you're definitely welcome to use any pictures for your LOL spot and we'd be very thankful if you did! It sounds exciting!

Figaro is a handsome panther! I see he has a love of Temptation, too!

Figaro is a very handsome Mancat. But I know a certain young tuxedo Mancat who is even cuter!

We'd be happy to telerport over and to help out with eating those Temptations! They're our favorite:)

Figaro is a very PanFURRY looking Mancat! It's nice that he is warmly greeted and treated by the 3-Ds... Some kitties are very territorial and can become quite upset with a kitty they see intruding upon their turf!!!

Figaro looks like a wonderful visitor kitty. Thats funny how he keeps shedding his collars. They don't do him much good unless they are "on". A little tighter would do the trick. But hes a handsome fellow!!!!