DANTE AND DOMINO: THEN AND NOW 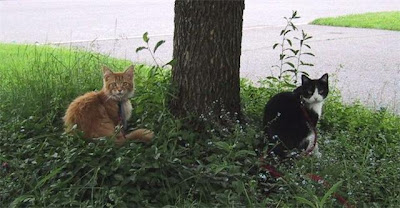 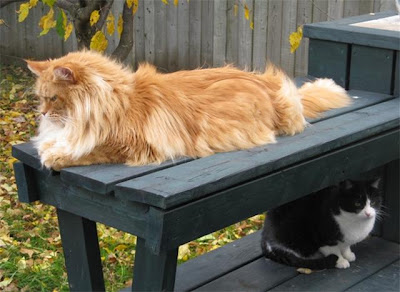 Some things change and some things stay the same. Witness the first picture of Dante and Domino under the tree outside. Dante is about five-months old at the time, and Domino is already about 2. They were approximately the same size then.

The second picture was taken just last fall. Dante was 6-1/2 and Domino 8 years old in October of 2008. Domino is still the same size she was at 2, but it's Dante who has made the miraculous transfurmation.

To give you an idea, my sweet petite Domino weighs in at around 6.5 lbs. and Dante at about 22 lbs. Of course, it took Dante a full five years to achieve this mass, but Domino has not budged an inch since she reached maturity at the age of one.

Good things come in both small and large packages, it seems!
Posted by CCL Wendy at Saturday, June 13, 2009

That is a sweet baby picture of Dante!

Dante looks so different before he got his mane. We are around the same weight, but his floof makes him look much bigger than me. I was 23lbs but when the Beans came back from their holidays I had gone down to 22lbs. Mum was happy about that because she is trying to get a bit of weight off me. She would like me to get down to 19lbs. If I have got any say in it, it's not going to happen. My brother Flynn is 14lbs in the summer and goes up to 15-16lbs in the winter. He runs everywhere. It tires me out just watching him.
Eric

We think Dante is fabulously floofy and Domino looks purrfect at that size!
Sniffie and the Florida Furkids

That is really something. I didn't realize Dante was such a big kitty!

Cute before and after picts. Dante has certainly bloomed!

Dante, you are a magnificent, gentle creature. And Domino is a gentile little lady! A live study in differences and similarities.

Wow, that is quite a change! Dante is about the same size Floyd was at that age. It is funny because when you hear it without seeing the cat, it sounds like a lot, but as you can tell by Dante, some cats are just big guys! It is funny to me because 6.5 sounds so tiny to me (all my cats are 11+ lbs). Dante looked so cute as a baby!

Oh I can't believe we missed this! Dante looks soooo small! What a cutie!