ZOOMING IN ON DYLAN! 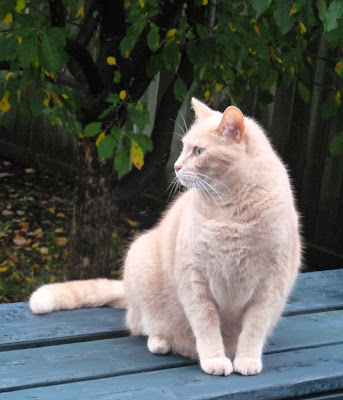 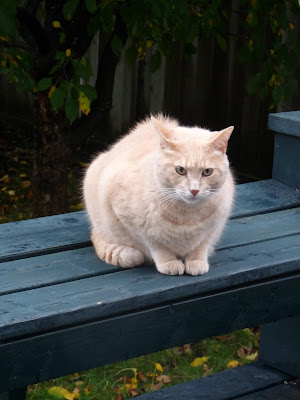 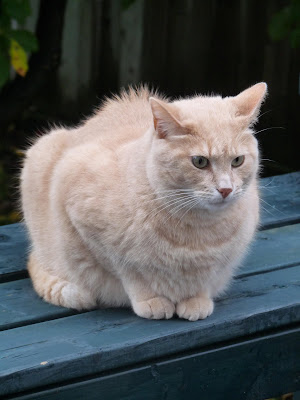 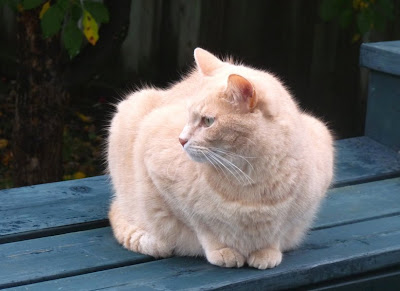 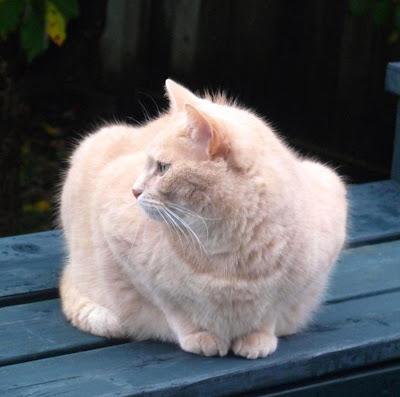 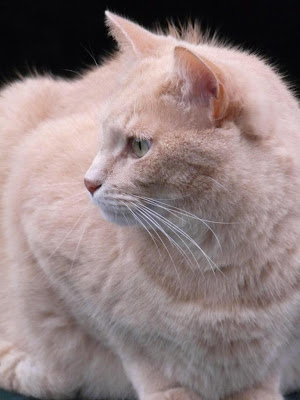 Dylan was out on the back deck bench after the rain, with his already thick, plush fur plumped up even more by the moisture in the air. He looks so very soft and almost floofy, for a short-haired cat.

These pictures are very evocative of my nickname for him -- Creamy Dreamy! I mean you have Dr. McDreamy on Grey's Anatomy. Well this is Creamy McDreamy, aka Dylan.

Dylan is the youngest of my 3-Ds. I was satisfied with having just two cats, Domino and Dante. Even after Dante though, I was always attracted to cream-coloured kitties.

Dylan eventually came to us after my brother's cat, Dusty, had a surprise litter on July 27, 2004. Dusty was only about 9 months old at the time, but I had been warning my brother that he should get her fixed for some time already. He, of course, ignored me (as he always does), et voila! Just let me interject here that my brother has Asperger's Syndrome which is a high functioning autism, which impairs social skills as well as what a lot of us would deem common sense.

Dylan was the firstborn. I know this because my brother called me all in a panic saying Dusty was running down the hallway with a kitten hanging from her back end, and as he put it "It has NO FUR!!!!". Of course, it was just Dylan's creamy furs matted down with the all the birth juices that had him thinking he was looking at naked skin. It still makes me laugh when I think of this today.

Dusty ended up having five healthy kittens in all. Of course my brother became attached to each and every one, and even though I was encouraging him to find homes by advertising them in the local paper, he was distrustful of anyone who called. At the age of four months, I knew the time to place them was becoming limited.

Finally, I decided I would add one of these kittens to my own furmily and selected Dylan because I admired his creamy coat. I wasn't sure how he and Dante would get along, but all my fears quickly vanished once I brought him home. Almost immediately Dante took Dylan under his wing and virtually mothered him. You can still see that instinct on this week's Mancat Monday post, where Dante is helping Dylan to groom himself.

I also found a wonderful home next door for one of the other kittens, Dylan's sister who is now named Buttons. Although we catch a peek at Buttons once in a while through the fence, she is actually afraid of Dylan, and according to her mama shakes violently if she sees him through her patio door. Poor Buttons!

Anyway, my brother still has Dusty and three others named Butterscotch and Pepper (both males) and a sister called Caramel who is mostly white with touches of Dylan's creamy colour.

Now it's time to zoom in closer on Dylan! We start out at a distance and then just increasingly hone in on him -- all the better to show him off. I think I must first have dreamed about Dylan, and then he became a reality. Isn't that how all good things happen?
Posted by CCL Wendy at Friday, October 02, 2009

He is such a handsome mancat! It is nice to know that his brothers and sister are all close-by, but too bad Buttons is afraid!

Great pictures! The moment my lot see the camera they walk off.

He is gorjuss ~ no wonder you couldn't resist making two into three.

PS: Can Dommy come over to play please?

Hehehehe...Creamy McDreamy!!!! Dylan does look floofy! He kind of reminds us of Tamir.

What a great story and what a handsome boy Dylan is!

Have a great weekend,
Tamar and Charlemagne

I never realized just how plush Dylan's furs are!

Dylan is such a cutie cat! Creamy McDreamy is a perfect name for him!!