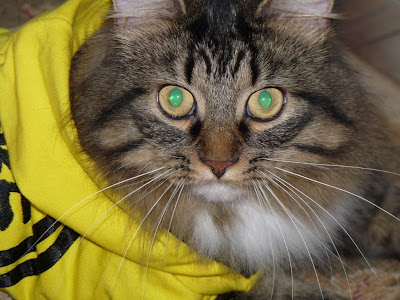 This is my grandkitty, Sox. He is one year old, just like his sister, Missy. My son brought Sox and Missy over to visit for my birthday. I hadn't seen them in a while, so I happily snapped some pictures.

We put Sox in Dante's Kung Fu outfit. Sox didn't seem to mind it at all, so we just left it on him. Of course, Sox is quite a bit smaller than Dante, so it was rather loose. Soxy was a really good sport as you can see. He is quite laid back, just like Dante. We thought he might have some Maine Coon in him because of his floofiness and his gentle nature. He didn't grow as big as we expected -- but he is one very handsome tabbycat! 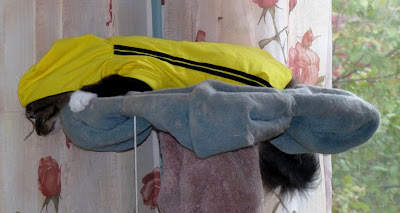 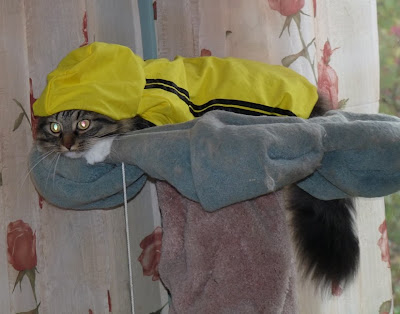 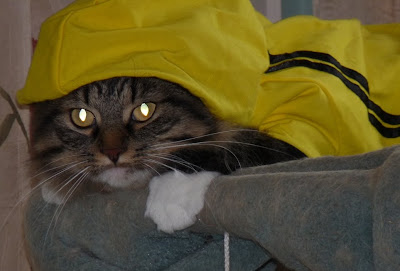 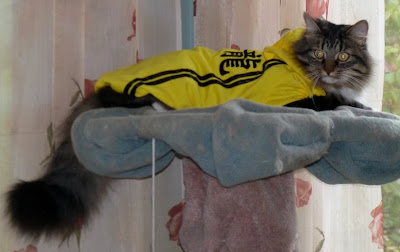 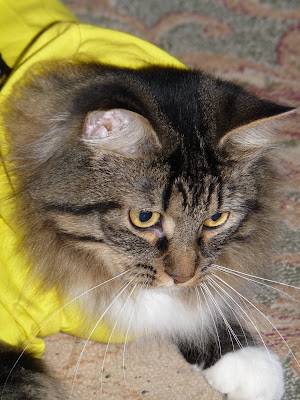 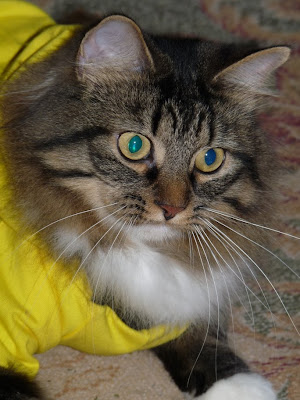 Next, we're on to Missy! She is also a little brown tabby, but with short hair and a lot more white. When she's at our house we call her "Hissy" for some obvious reasons. She is quite the aggressive little thing. Apparently, when she is at home with my son, she is the most cuddly and affectionate of the two cats -- and nary a hiss is heard.

However, at my house, I think the 3-Ds have Missy trying to defend her territory within their territory. Even Domino (who is very dominant, herself) leaves Missy be.

We put another one of Dante's shirts on Missy but she wriggled out of it all on her own. She enjoyed being on top of the cat tree, best -- where she could watch everything that was taking place. Here's pretty little Missy. 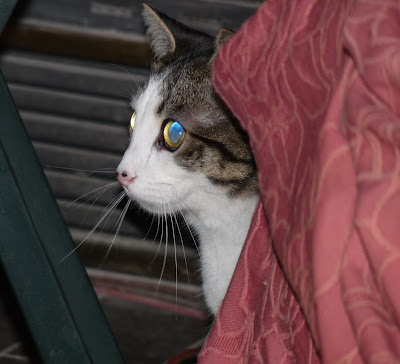 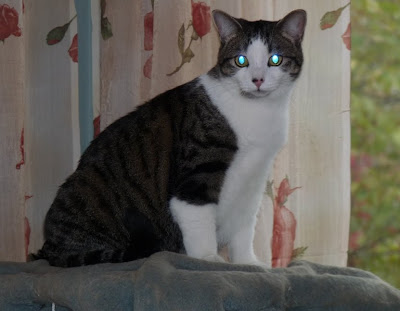 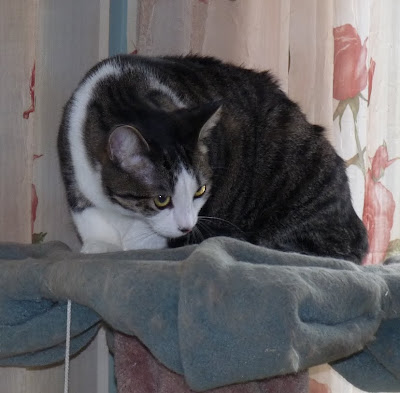 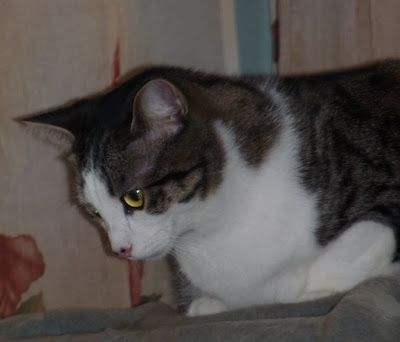 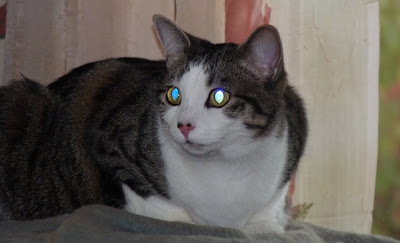 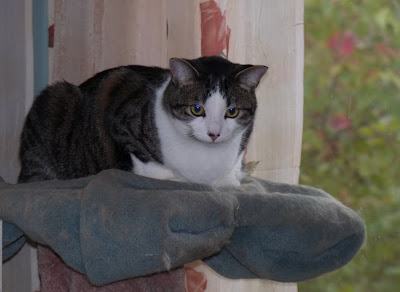 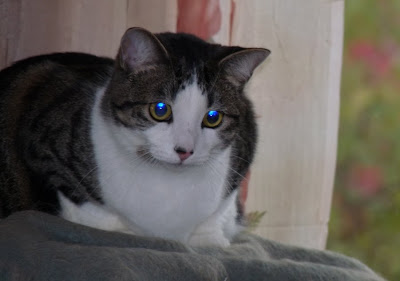 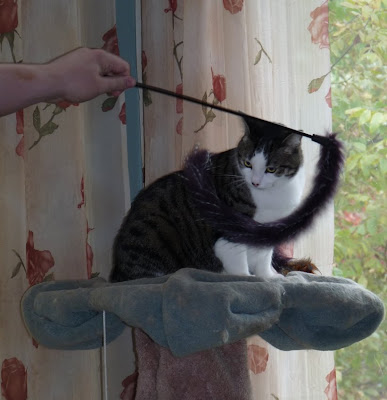 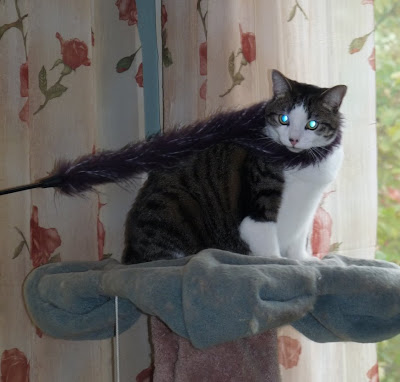 And finally, here is how Sox and Missy arranged themselves at my house. Missy pretty much stayed on top of the cat tree the entire time and had a little nap while Sox enjoyed some playtime with his Dad. 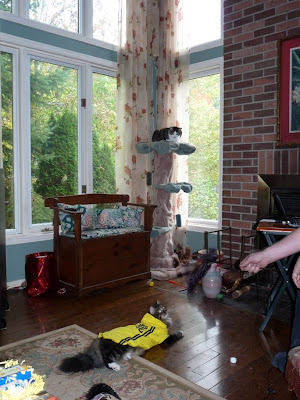 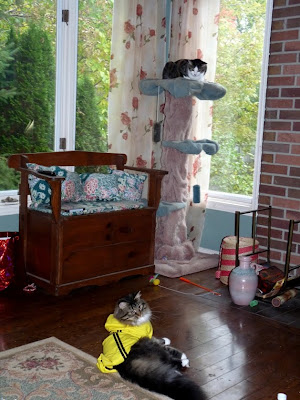 We will have much more to be thankful for this weekend because it is Canadian Thanksgiving on Monday. I hope that my grandkitties will come back over for some turkey giblets and to share in the festivities with the rest of the family. Then we can all be thankful together!
Posted by CCL Wendy at Thursday, October 08, 2009

I think you have a great home!
Those are wonderful windows you have!

They are both adorable, how sweet of them to visit...

What wonderful grandkitties you have! Very cute!

We're also in Canada, so we are looking forward to Thanksgiving also.

Sox and Missy look like they fit right in! It's nice that they came to visit!!

Sox and Missy are adorable ~ and we love Missy's bloo laser eyes! She's a tuff cookie!

They are both lovely kitties! It's nice that they can come over and visit. Your 3 must've been off hiding...er, playing...somewhere else. MOL

Purrs and hugs, and happy Thanksgiving in advance,
The Kitty Krew

Grandkittehs are the BEST! No PURRmanent committment- and you get to enjoy your kids enjoying them! They are both SWEETHEARTS!

Very cute, Ninja Sox is very cute and you can hardly tell how cranky Hissy is.

We LOVE those windows! The kitties are lovely, too, especially handsome Sox!

They are very sweet!

Thanks for introducing us to your grandkitties - they are cuties! I am amazed they even tolerate visiting - if we tried that with our cats they would never forgive us!

You have cute grandkits! Sometimes I call Harley "Snarly", even though he never snarls.

My sink is snug and comfy, but if anyparent wants to get my a bigger more lux sink I would be fine with it.