The first few pictures were taken late last week, and the rest, just yesterday.  We've had some slow but steady melting going on, so that now there are some grassy patches on the front lawn.  Domino, of course, had to explore them, and posed beautifully for me during her appointed rounds.

The pictures of Domino on the driveway were taken by her Daddy.  The pavement heats up in the winter sun and makes a good escape from the still mostly snowy landscape. 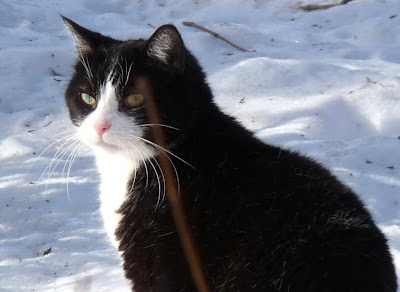 Domino's black is crisp against the shadowy white background.  A branch from the spirea bush adds a spike of interest in the foreground.  Although, Domino is interesting enough, all by herself, of course! 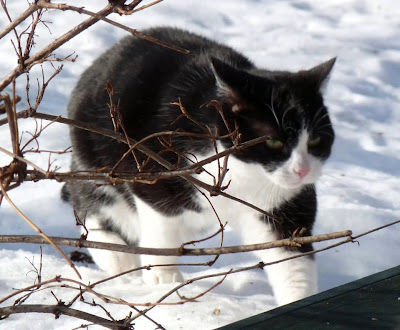 Here's Domino with that intent look on her face.  She focussed on her destination -- the bench!  What an intrepid girl she is! 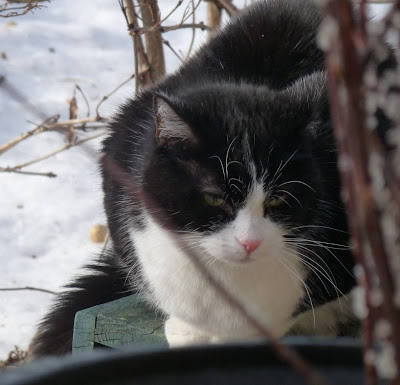 And here she is, taking a breather!  Pretty pink nose front and center. 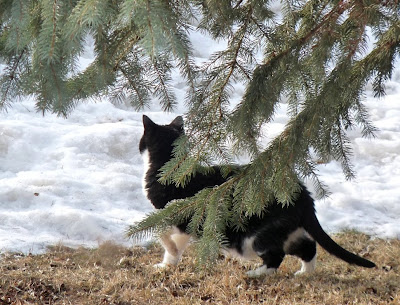 And a few days later, here's the grassy patch underneath the pine tree.  Domino's attention is caught by something rustling -- is it a birdie or  a squirrel?  There's a certain air of mystery to this one.  Also, note the perfectly raised front paw as she poses prettily. 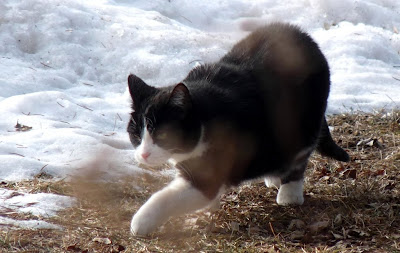 And, she's off!   There's that intense look on her face again.  It really makes one wonder what she might be thinking.  She seems so very purrposeful!  This time the spirea branches add a touch of blurry interest.  Instead of sunspots, we've got bushspots! 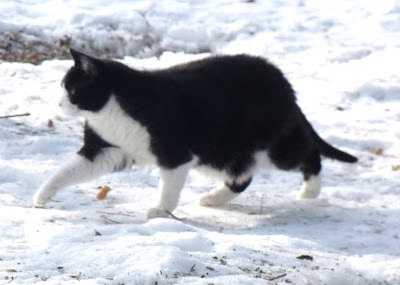 Domino makes her way through the snowy tundra, determined as ever to reach her new destination -- wherever that may be! 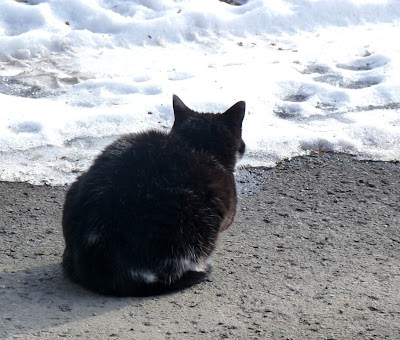 Ah, it's the driveway!  Daddy captures Domino in a pensive pose.  I think she's watching the ice melt -- that can be quite the fascinating passtime, by the way.  It's all that slow trickling going on! 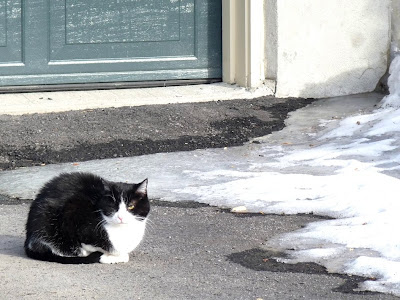 And this puts little Domino in purrspective.  Small but mighty! 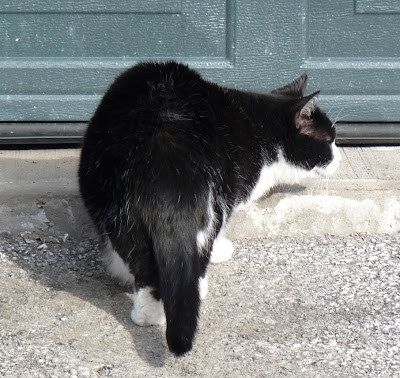 I love the curves of Domino's little body in this one!  Something has caught her highly-peaked attention. 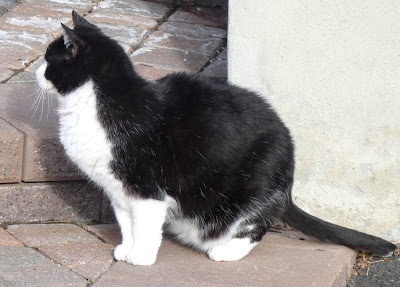 And here she is, posed in profile, back from whence she started. 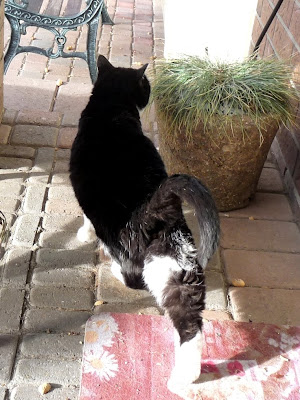 This calls for a good stretch, and a nibble of grass don't you think?
Domino:  The End
Posted by CCL Wendy at Tuesday, February 16, 2010

Domino is as cute as always!

You are the purrfect tour guide, Domino. And so very photogenic while guiding us around. xxxxxxxxxxxx

Domino those are great - we especially love the stretch at the end! We think Milo is going to go crazy for them!

Domino is SO adorable! Mom want to munch her all up!

There is something so beautiful and artistic about a black and white kitty with a perfect pink nose!

Such a beauty and that stretch was adorable!

That was an interesting walk Domino, and we enjoyed taking it with you.

Domino, you are so gorgeous against the snow...and mom is totally in love with your leg stretch. She goes crazy when we do that!!!

Domino
WE never tire of seeing pictures of your beauty.

Domino, ever graceful, always looking good.
We are happy to report all the snow has gone from our garden. But no doubt we haven't seen the last of it. It's just that kind of winter.