THE 3-DS OUT AND ABOUT ON A THURSDAY!

I love it when I can have a post with all three of my darling Ds at once.  So, this is another one of those, plus the extra added bonus of a video!  This is unprecendented because I don't think I've ever had a video with all three in it before.

First, though, I must include individual shots of Dylan, Domino and Dante; each doing their thing.  It's a  3-D imPURRative! 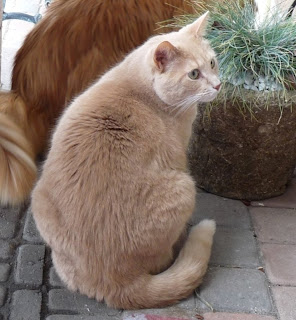 Dylan joining in on the daily sniffing of the giant Chia Pet! 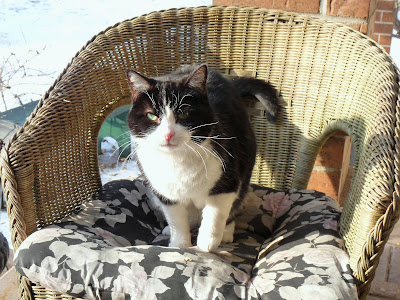 Domino catching some rays on the porch chair. 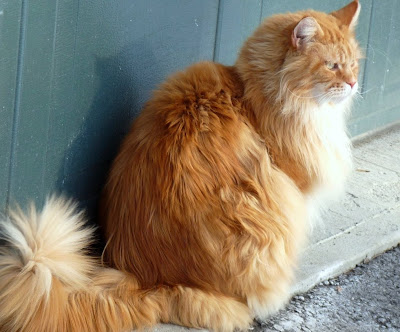 Dante checking out the driveway in front of the garage door.
And here is the promised video -- don't worry it's quite short.  It starts off with Dylan harassing Domino.  They are both on our neighbour's porch which they have claimed as their own.  Dylan is purrusing the neighbourhood and Domino is being her nosey self by peering in the the neighbour's front window.
Dante makes an appearance at the end.  He's standing on our front porch, but avoiding the camera for part of the time.  He finally turns his head in my direction, and the video ends.  The last shot of him's a good one, though, although YouTube cuts it short.
I didn't realize I was sighing so much, so please excuse me.
Here's the YouTube link for:  "The 3-Ds Out and About"
Hope you enjoy (sigh)!
Posted by CCL Wendy at Thursday, February 04, 2010

That is a wonderful video! You captured all three!

Loved the video--especially Dante sitting there like the proud mancat that he is!

Oh, all three cuties at one time - that is awesome!

BEAUTIFUL! Your cats are absolutely gorgeous and we love them so!

Some days are just "sigh" days and it can't be helped. The boys are totally handsome and Domino is a beauty....a bit nosy maybe, but still a beauty....MOL xxxxxxxxxxxxxxxxx

Great video. How long will it be before the three will be together again.

We loved the video.

Great video. We liked it when Dante looked straight at the camera at the end.

Your neighbour is so lucky to have such wonderful visitors. Just imagine looking out the window and seeing Domino looking at you. That is just wonderful.

I liked how the wind blew through Dante's mane :)

LOVE the pictures and the video of your little PURRch Kittehs! Fun watching them move about and the fluid motions of the plush Domino. LOOKS like LOTS of fun!

My Mummy sighs whenever she sees Dante, too, 'cos she thinks he's so handsome!