DOMINO AND DANTE: A MEETING OF THE MINDS (AND OTHER BAWDY PARTS)

Contrary to all appearances, this first photo is not a standoff between Domino and Dante, although with Dante's raised back and Domino's seeming defensive posture, one might think so.

Dante was just stretching, and Domino had just hopped up on the bench. 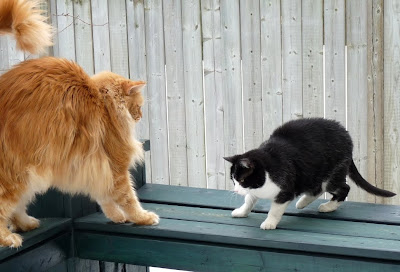 And seconds later, this is what happened! 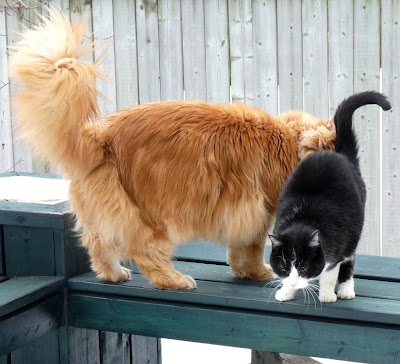 This is Dante's usual greeting.  He does the same to Dylan.
"Hi, how are you?  Let's see what's going on back here!" 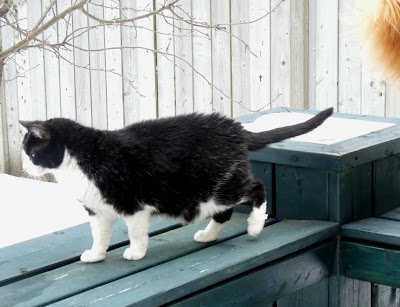 Domino doesn't react hissily at all to Dante, although if Dylan had done the same thing it would sound like World War III had broken out.  "Butt" enough is enough.  Little Miss Domino prefers to be left alone, thank you very much. 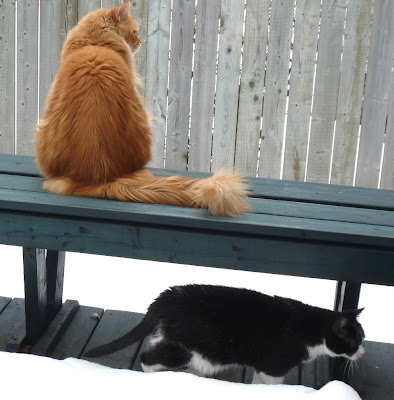 And to avoid any further "herASSment" by that big "BUTTinski", Dante, Domino just takes the path of least resistance on her way to the back door.
In any event, the relationship between Domino and Dante is quite peaceful.  There seems to be a common understanding between them (unlike with certain other parties, previously mentioned herein).  Dante is very respectful of Domino, and she allows him a little latitude now and then.  And all is well.
Posted by CCL Wendy at Friday, February 26, 2010

I'm sure you could come up with a very clever caption for that first photo in particular!

Yeah, the butt sniffing...Nicki does it to both Annie and Derry and when he and I do our head rub routine, he likes to present me with his behind. Um, I'm honoured. Really.

As our daddy would say... He's checking her ID!

Well,you gotta make sure she's not an imposter!

You can really see the difference in size of Dante and Domino in that picture. She is such a tiny dainty tuxie girl.

That is so funny - we get a little of that at our house but not too much.

I'm on my way over for a play date!

Domino is a girl that knows her mind!

Domino is quite the impressive lady.

Flynn has to stick his nose up my butt every time I come indoors too.
Eric

It's so great to see those two together, Dante so majestic and Domino such a tidy little thing who definitely knows her own mind.

Miss Domino, knows how to keep the boys in line!

Glad there was no fighting!