So, here's a bunch of pictures which I normally wouldn't feature because they're not up to my usual standards, but which may or may not be amusing in some way.  In any case, they're definitely different. 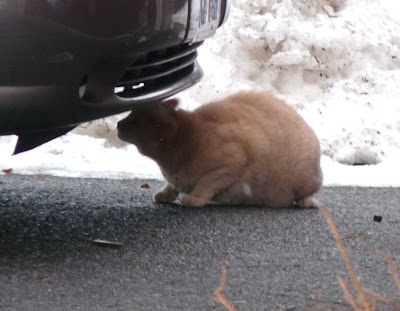 First, here's Dylan, in our neighbour's driveway, checking out their car. 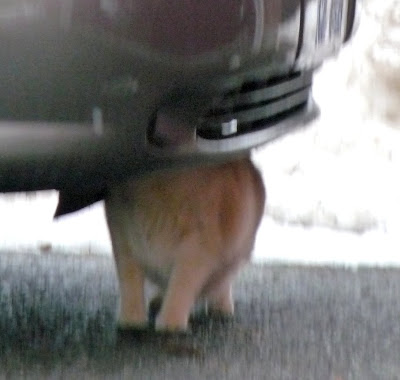 He's got his head right up it's front end!  Wonder what he's sniffing? 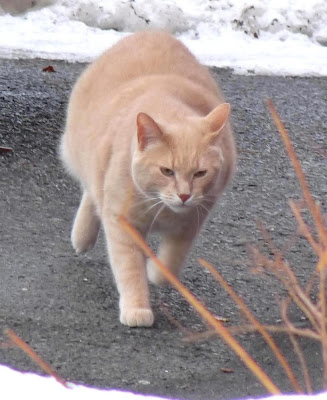 Here he is on his way back home now with a rather queasy look on his face!  Must have inhaled too many fumes or something. 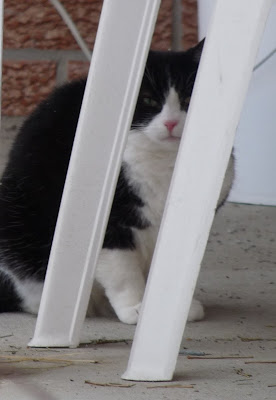 And while her brother was busy smelling car engines, Domino was also on our neighbour's property (where else?) peering through the legs of a plastic chair.  I can see you!!! 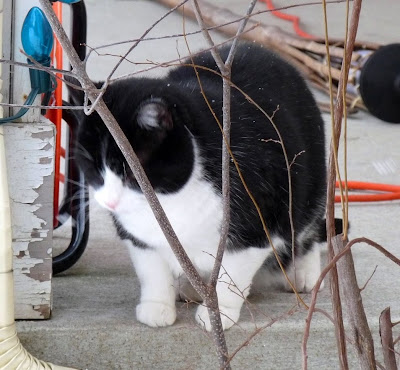 Here she is, thinking about coming home, but ... 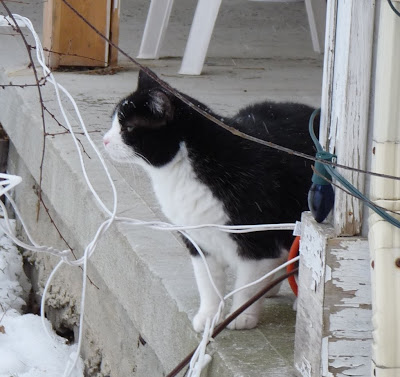 ... decides to check out the wiring instead! 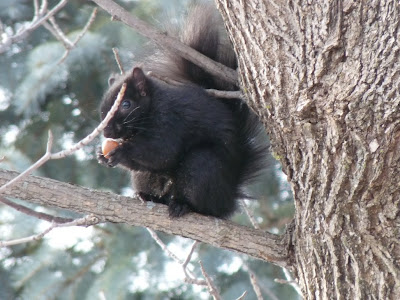 These squirrel pix weren't really outtakes "purr say", but I thought I'd include them because they are always part of the landscape.  In this one I had scattered some hazelnuts instead of the usual peanuts. 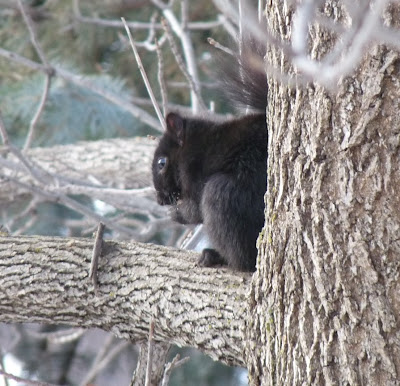 Of course, the shell is a lot harder, and it was very interesting to sit and listen to the buzzlike sawing of little teeth instead of the usual cracking sound I'm accustomed to.  It took squirrelly at least three minutes to get through to the nutmeat, but I assume it was worth it! 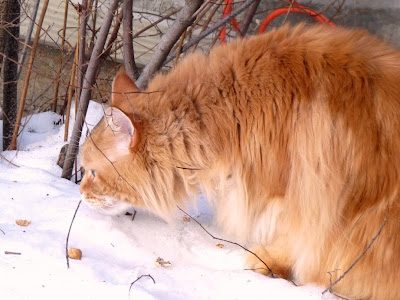 And certainly not least, here's Dante sniffing out the presence of introoders. 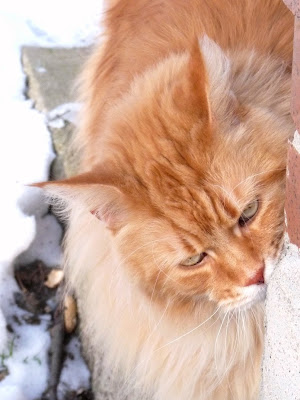 Note the nutshells strewn just about everywhere!  Where there are empty shells, there were certainly little black beasts running amuck (and I don't mean Domino)! 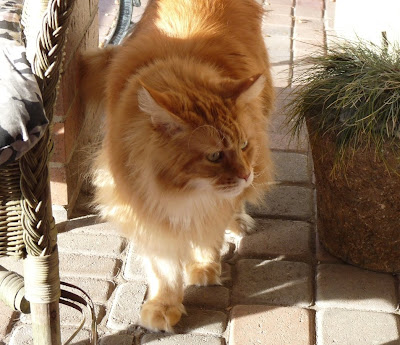 Even our front porch is not safe from those smelly little beggars! 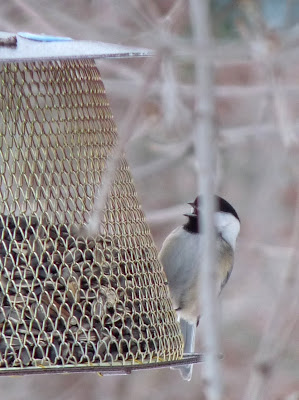 These sweet little chickadees are also part of our everyday landscape recently.  I felt guilty for feeding the squirrels and not the birds, so Daddy went out and got a bird feeder.  I love this picture of the little guy with his beak wide open.  Too bad the branch was in the way, though. 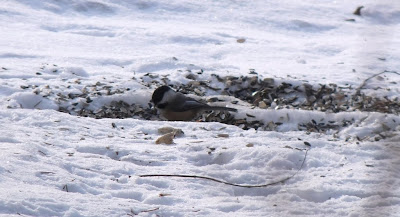 You may note that the bird feeder in the previous picture was already half empty.  That's because the squirrels tried to balance on it, and it fell to the ground, spilling seeds all around.  So now we have birdseed and nutshells both adorning our snowscape. 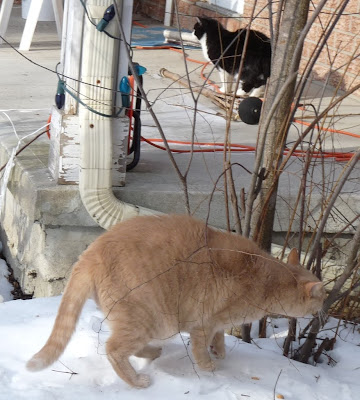 Dylan and Domino, both trePUSSing at the same time! 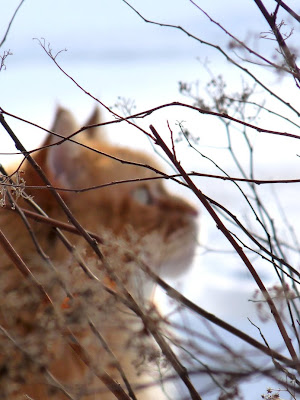 A fuzzy Dante through the bushes! 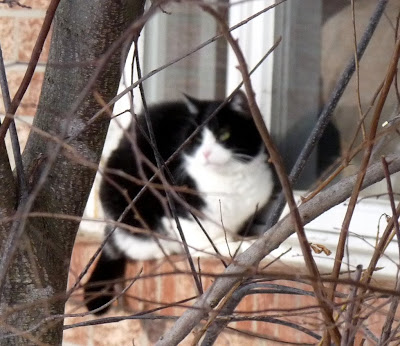 And finally, for today, a fuzzy Domino through the neighbour's bush.  She's stationed at their front window, again, ready to invade their privacy at a moment's notice.
And that's the 3-Ds and their little friends on this very fine Caturday.  We hope you liked the outdoor outtakes as much as we did.  Sometimes the impurrfect is even better!
Posted by CCL Wendy at Saturday, February 06, 2010

Still very lovely pictures. I thought about hanging up a bird feeder to help and to have the fun of seeing feathered little visitors.
But my little climbers are just too quick and nimble.

Looks like you all had a full day of exploring and keeping the intruders at bay. We don't have squirrels that color here. He must be a special one. Have a great weekend.

Those were great! It's fun to see out-takes!

We like the out takes. Makes them more real!

We're happy that you did post the pics cuz we sure did enjoy them....Happy Caturday dear friends. xxxxxxx

You two certainly were very busy. These out takes were really good pictures but then they usually are. Better be careful trespussing. Hope you have a wonderful Saturday and an even better Sunday.

Great outtakes! We loved the one of Dylan and Domino trespassing.

You guys are such good watchcats, I hope the humans appreciate how safe you keep them!!

I love the fuzzy Dante through the bushes.
Great photos.

We love watching the 3-D's going on about their business. They certainly have plenty to do in a small area, what with all the intruders and neighbors to monitor.

I like the outtakes. Sometimes they are a story unto themselves.

We LOVE the tresPUSSing pics!

Please can yoo tell Dommy I'll be over to see her after the Superbowl at Gracies ~ 'cos I've promised to take care of Alfie for mom (she's worried abowt him going that far on his own).

Your outtakes are other people's good photos! I marvel at how awesome your photography has become! You certainly take awesome pictures of the 3-Ds and all the other little creatures! VERY SWEET!

Your outtakes are better than lots of Mom's good pictures!

We liked the out takes. The chickadees look very similar to our blue tits and coal tits.

I think the Dante picture behind the bush is my favorite!