TUXY TUESDAY: DOMINO OUT AND ABOUT! 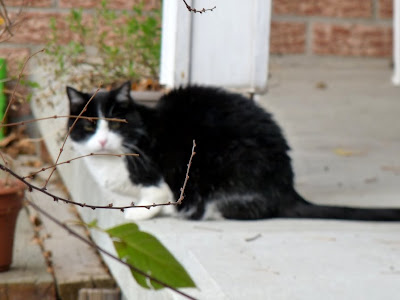 First we have Domino sitting on our neighbour's porch. She believes that it belongs to her, so in her view it's not trespassing (or even tresPUSSing)! 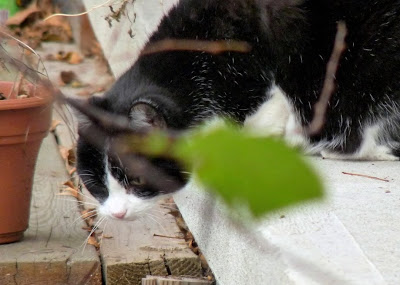 Their garden is winding down like everywhere else, but it still holds fascination for the territorial feline. 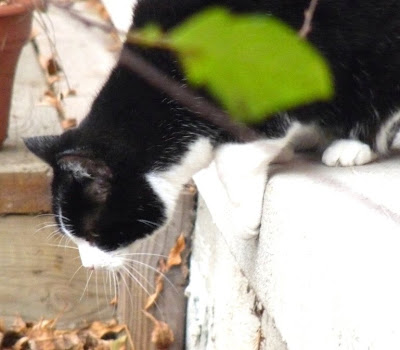 Domino's about to leap! 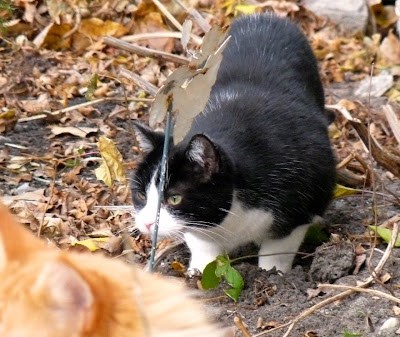 Dante's also standing in their garden bed. It looks like both of them just spotted an evil squirrel (what else?). 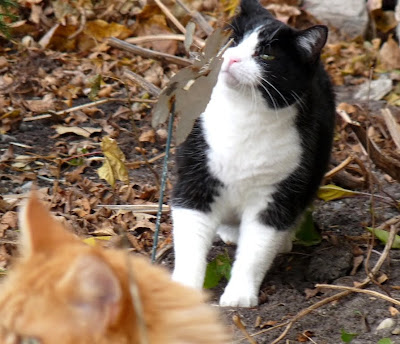 Obviously, to Domino, squirrels are only of passing interest. She turns her nose to the garden decoration. It must have some pretty funky smells on it. 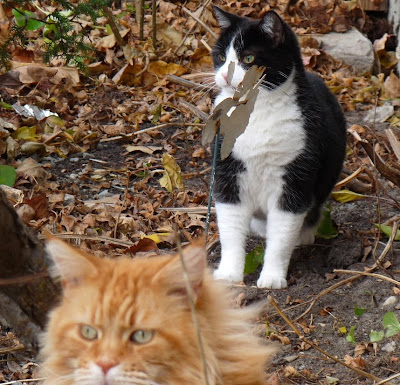 Domino's a very good multi-tasker, though. She can look at a squirrel and sniff stuff at the same time. You try it -- it's pretty hard to do! Something like rubbing your head and your tummy simultaneously. 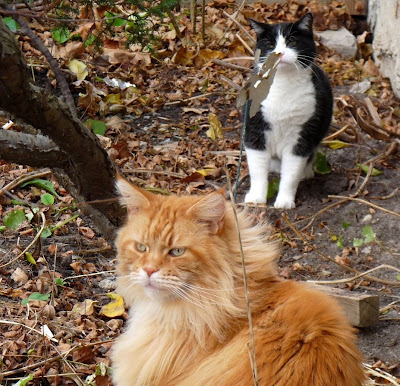 Can't get enough of that thing, can you Domino? You're even crossing your eyes at it, now! 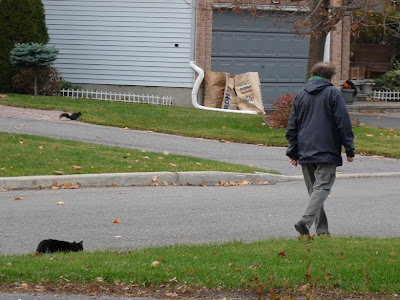 Aha! Something has taken Domino's attention away from smelly things (or has it?). Daddy could be smelly too for all we know. Domino is following Daddy down to the end of the street to the community mailbox. 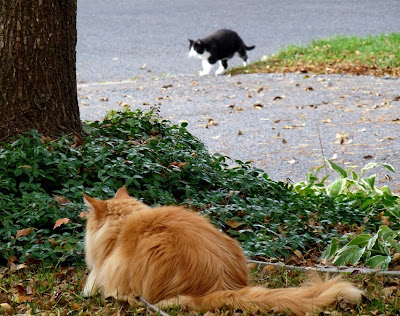 And here she is on her way back. Dante is stalking her now. Of course, he can't go any further because he's leashed. 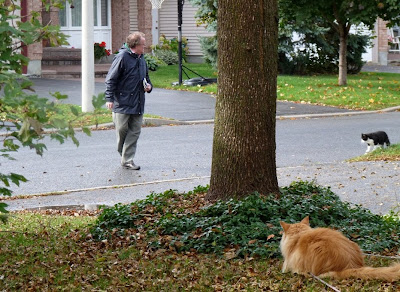 Daddy is looking back at Domino telling her to hurry up now! She tends to doddle, you know.


And as an extra-special added feature, I made a video of the rest of the trip home. Of course, it's not the best, and I hope my high-pitched voice doesn't turn everyone off. When I hear it I just want to plug my own ears.

It does illustrate Domino's sheepish ways, though. She loves to follow people -- only those she knows. And she never goes farther than the mailbox.

You'll be glad to know she and Daddy are safe and sound back at home. What an adventure she had today!

P.S. Check out our Tuxy Feature on the LOLSpot, today too!
Posted by CCL Wendy at Tuesday, November 10, 2009

How come Domino gets to walk without a leash and Dante must wear one? Just curious . . .

That is a cute video, Of her following Daddy.

No one likes to hear their own voice on tape!

I LOVE to see videos of Dommy ~ 'cos she's so speshull to me. And it's funny the way Dante snuck into so many of the pics!

PS: It's raining again today :sigh: so our owting to the seaside wiv our flat-cats has hadta be postponed again. :sigh:

You guys have wonderful outdoor adventures!!

Cute video - does Domino often walk with Walter down to the mailbox? Neat. -- Marilyn

That's a great video of Domino and Daddy. We weren't sure she was going to come back. What did she see?

Your colours look so wonderful in the natural light!

Of course Domino can multi task, she's a lady. We saw that squirrel over the road when she was following her dad.

Looks like Domino is having a lot of fun in the fall time... She looks like she's still trying to play jungle cat... only the leaves are missing! Adorable as always!

Wow, that is funny that she likes to follow people - and that she thinks that the neighbors porch is hers. It looks like she has a very exciting time outside!

Domino is so dainty! Just another example of how ladycats have to do everything!

Domino is so dainty!

It was fun watching Domino out and about!

That yard decoration must have smelled like so many critters; who has been in that yard? Good work retrieving the mail Domino.