It's been sunny and relatively warm for the last several days and the 3-Ds are taking advantage of it! They've been out more than usual and just soaking up the rays.

The sun is at its peak much earlier in the day, and gives us its maximum benefit in the hours just after noon.

Each of my kitties is virtually alight! The sun has touched them all uniquely, and for this they are very thankful. 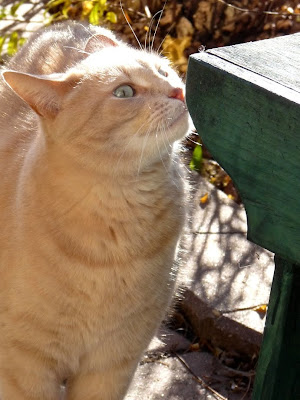 Here's Dylan checking out the scent mark on the bench. He's freshening it up a little, too. 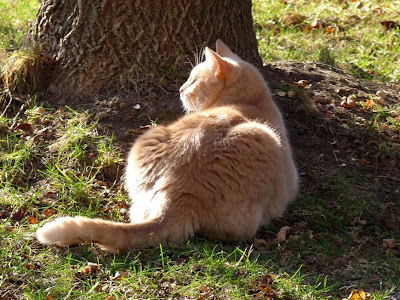 A sunkissed Dylan is resting under the leafless tree, still partially shaded by its large trunk. 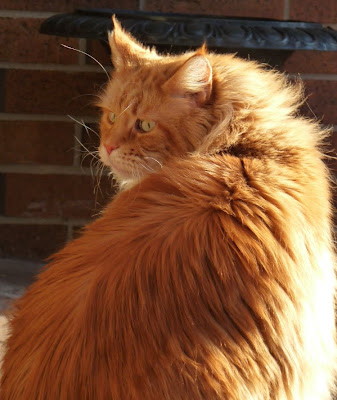 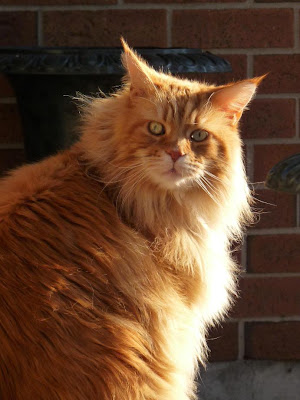 He's my goofy, but very hot and hunky mancat! 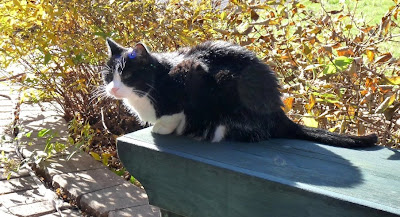 Domino's certainly enjoying the unseasonable warmth. Her black coat soaks in the heat like a sponge with water. 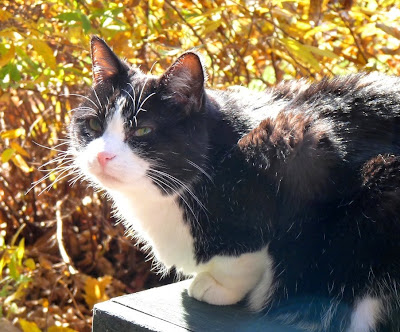 She's smiling prettily in this one. Enjoy the sun now while you can, Domino!

Here's a little extra action. Domino is talking up a storm in this one, so you might want to turn up the volume a little. I think she's telling me she wants to go back inside now. What do you think she's saying?

And Dante is talking, too! (This time with his mouth, not his 'tocks.) He definitely wants in.
I don't need any translation on this one.


Dylan wasn't saying anything at all, so that's why he doesn't have a video today. He has some upcoming releases, though, so stay tuned to this channel.
Posted by CCL Wendy at Thursday, November 12, 2009

These are such gorgeous pictures. I wish we had fall here in south Florida!

Cute videos. Enjoy the sunshine and warmth while you can.

The cats are all so gorgeous, with the sun touching each in a unique way. Domino seems to want to see what's going on inside too maybe?

Hi Dommy, is yoo missing me? I'm on my way over ... should be wiv yoo by lunchtime!

Great photos and cute videos. We loved the way Domino got right up to the camera!!

Ah! The Sun...wonderful.
We loved the photos and videos!

Loved the videos! Those cats definitely wanted to go IN, didn't they? We kind of expected Dante to have a deeper voice, though.

Dante, I must say you are one magnificent Mancat when the sunlight strikes your furs!! Of course Dylan & Domino aren't too shabby either.

Good to hear you instead of just seeing you.

Those are all great pictures - they all look very happy to be enjoying the sun while they can!

I was blog surfing and clicked on your blog. You cats are so lucky, I am not allowed outside because I don't have fur. You look your having fun. I wish I had some of your fur too.

I just love Domino ~!
Tuxie are the best cats ever!!
Domino is just lovely and darling!

Your cats are fabulous with the angle of the fall sunshine... Brings out the very best of their vibrant coats! YEAH good weather for photographing kitties!!!

Over here the very same: unseasonably warm (but not that sunny). And the cats do want to go outside, but never for long. (It's so hard to get a decent photo these days)