DANTE AND DOMINO GO TO PETSMART! 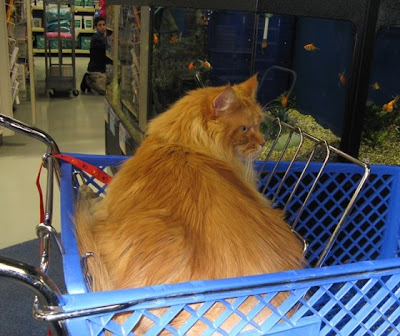 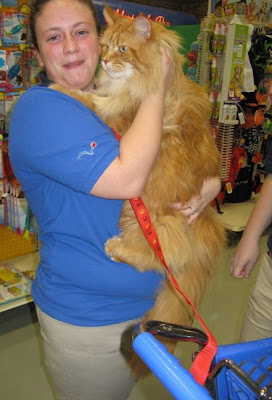 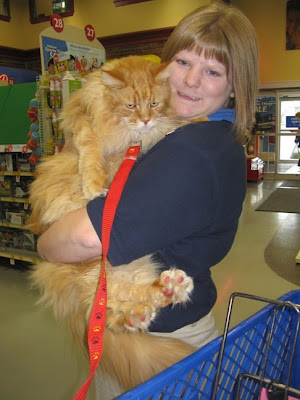 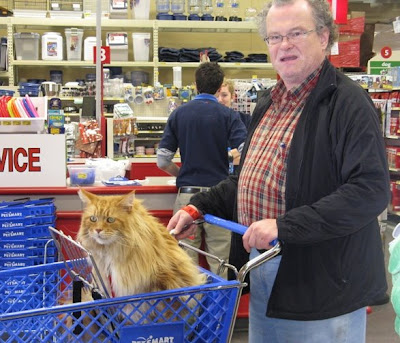 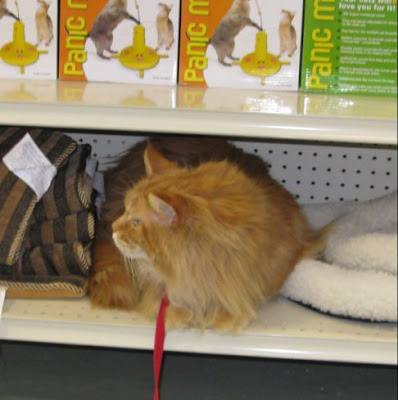 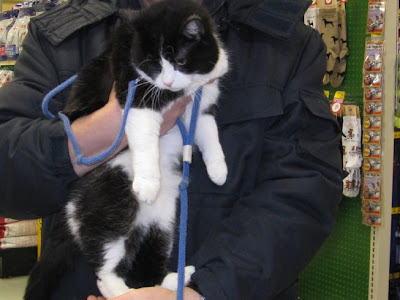 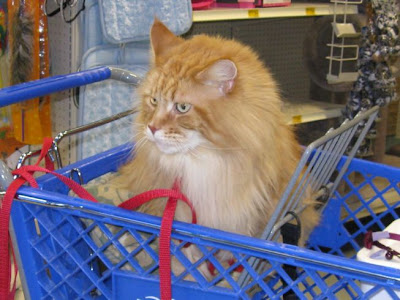 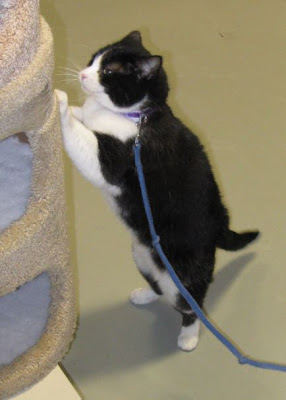 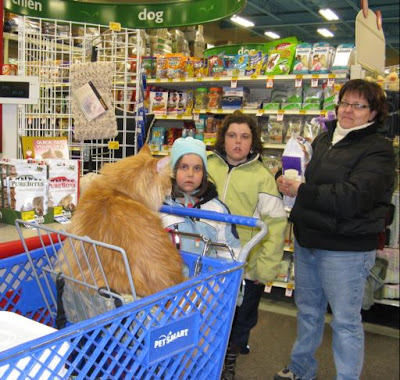 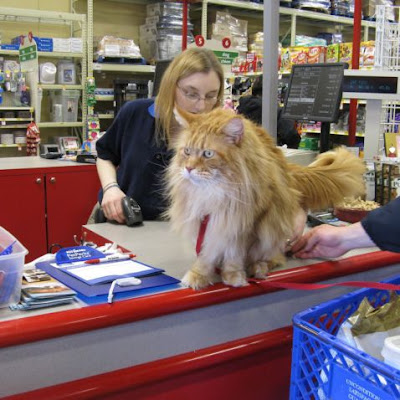 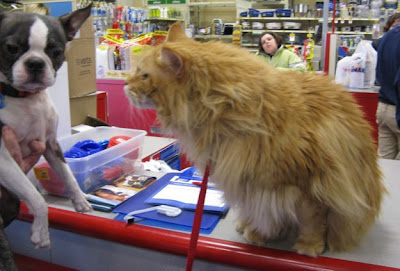 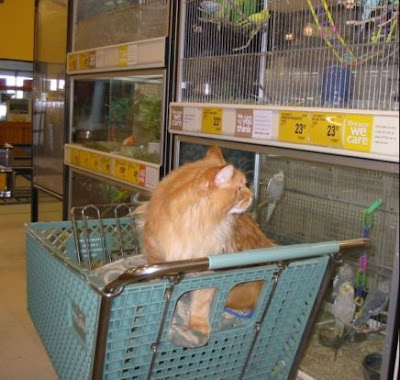 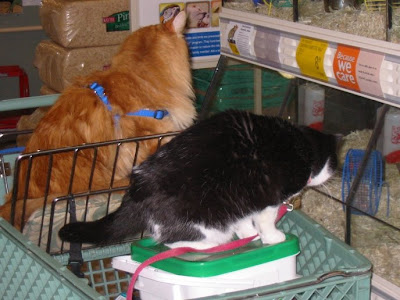 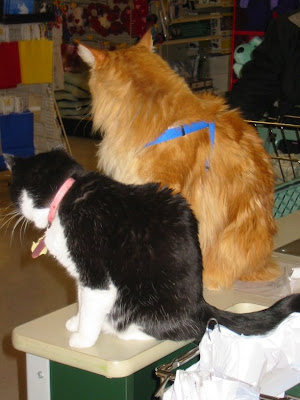 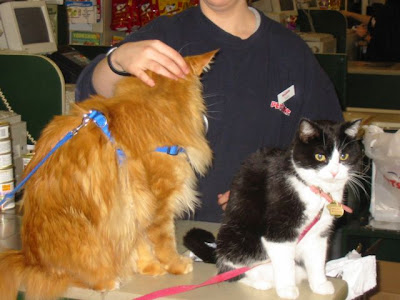 These are pictures of a few of our shopping trips to the local Petsmart with our kitties Dante and Domino. We started to take Dante on a leash to the pet store when he was about six months old, and continued the purractice on a regular basis so that he would get used to the car, as well as have an exercise in socialization.

Domino who is a year older and was already used to the leash, loved the car ride from the beginning and looked furward to claiming the Petsmart aisles as her own. Indeed she would even park herself in the middle of one of the main aisles and roll around like she does on the pavement outside. Of course, many people would stop and smile and give her a pat.

However, when people spied Dante, their mouths would always drop, and invariably they would say that they saw him from a distance but thought he was a dog! Dante always drew crowds wherever he went, and we were always answering a myriad of questions about him, as most people had never seen a cat quite like him before. Many wanted to pet him or pick him, and he was amenable to that, but did tire of it after a bit.

Normally, Domino would trot around on her leash with my husband, going up and down the aisles -- she especially favoured the dog section for some reason -- purrhaps it was the scent. Meanwhile, I would wheel Dante around while he sat on his cushion in the child seat. We would stop to look at the birdies and fishies and diffurent kinds of small rodents.

So, the Petsmart visit was also like a Wonderland to my kitties. There were all kinds of unfamiliar and intriguing smells, sights and sounds. In one store, there were even birdies flying free. We think they were birds that became trapped in the warehouse-like building, and then made it their purrmanent home. They didn't look like the birdies in the cages.

Most people brought their dogs with them, and some were dismayed to see my feline pets -- others were distinctly surprised. Neither of my kitties had any problem with any of the canines unless the dog made a threatening move. My little Domino would just hiss in such a case and raise her paw, and even the largest dog would back away in terror! Small dogs were just curious, for the most part, as were my kitties of them. I think Dante would just have liked to play with them if he could.

Dante and Domino also liked to sit on the checkout counter while their food was being scanned into the computer. This usually elicited pats from whoever was processing our order.

My only complaint was that they kept dog treats for visiting dogs at checkout, but nothing for cats. I felt that was distinctly unfair -- I mean how much would it cost them to open one small pouch of kitty treats? I even mentioned this to the manager one time, who became all officious and said she would have to bring it up at the next management meeting! What hokey, we say! Is this such a major decision? I mean we were regular customers after all.

We haven't been to the Petsmart for a few months now, so we're due to make another trip. My husband has been buying the kitty food at the regular grocery store instead. Now that the nice weather is here again, it's time to hook up Dante and Domino and hustle them off to their own purrsonal Land of Wonder!
Posted by CCL Wendy at Friday, May 01, 2009

That's awesome! I have never been on a shopping trip like that, but it looks very fun. I would probably be a little too scairt to go, myself.

I think my favorite picture in this series is the one with the little girls- customers looking at Dante and you can see the look of AWE on their faces! What's THAT? Is that a CAT? I will most definitely have to send this link to my son's GF Amy who works at PetsMart!

Looks like you have some great adventures. Mom and Dad have talked about taking my sister Maggie to Petsmart because she's much more agreeable to travel and they'd love to see her interact. I bet Dante gave that dog the business!
--Jasper

What an adventure! We see dogs in PetSmart all the time but never cats!

Wow, Dante is a load of cat! So regal, too. And Domino looks so cute standing up to scratch!

Wow, what a pawsome trip you guys had. I don't thinks we would likes goings out since we hates the car and I don't likes strangers either. Even as a kitten, I guess I didn't has very good experiences. But I luvs my furever home! Thanks for gettings some springs, you guys will loves them!

OMG! I love your cats! They are so well behaved in PetSmart. Don't know that mine would be. How fun!!
~Dana, mom to The Creek Cats~

Dante and Domino had a great adventure! (We agree that they should have cat treats at the cash).

Dante is such a striking cat that I'm sure everyone was surprised. I had a very large cat that people often mistook for a dog from a distance (he wasn't a Maine Coon but was just very tall and long). It's funny to watch their faces when they realize he's a cat...

I love the photos and especially the one where Dante and Domino are looking at the mice...

Oh, what wonderful pictures of the Petsmart Adventure! It looks like lots of fun seeing all of those birds and mice!

Just can't get over how handsome and mancatly Dante is!

What totally beautiful boys (they are all boys aren't they?)... and we loved visiting Dante's blog as well... great, great photos of them all.
Please email us, so we can send one of our
"pikshurs" to you... which we always make for new friends! Thanks and purrs, Maggy and Zoey
zoolatry@gmail.com

Wow, I would be so nervous in a big Petsmart with doggies and strange people all around me! Dante and Domino are so brave!
~Tober

How cool is that, your kitties get to go shopping.

How cool is that! Mom said she wishes she was there, just look at the other costumers faces...priceless!!=^Y^=the Cat Street Boyz

Wow, great job! I'm really interested to see how well you do with your challenge.