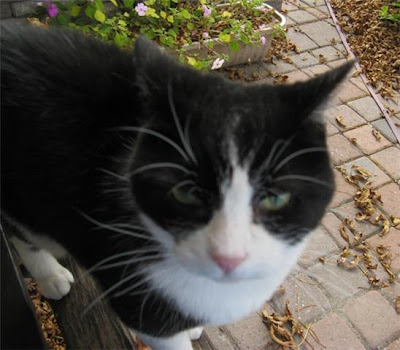 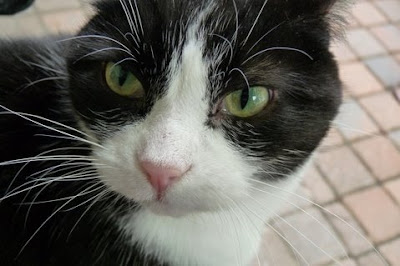 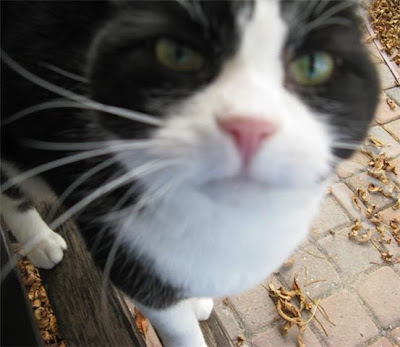 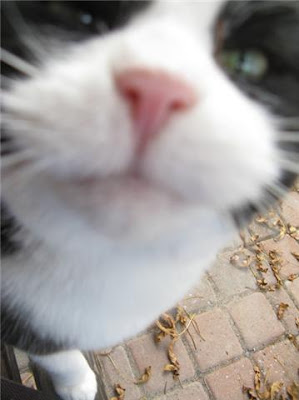 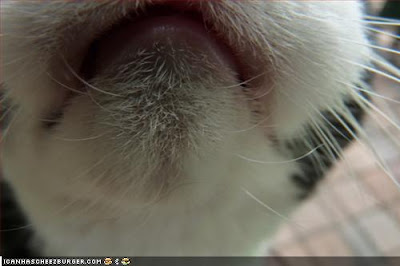 This is my nosy tuxy baby, Domino, getting more than a little curious about the camera. Of course, since she's the boss, it's absolutely impurrative that she check out efurrything in her realm.

Domino is also rather a mama's girl and likes to sit beside me on the front bench where we can both purruse the neighpurrhood from a singular vantage point. I call Domino my familiar, because she is indeed exactly that -- furry familiar.

In these pictures, she is trying to become even more intimate with the lens, as you can see. She starts off looking at it with some suspicion, and gradually nuzzles (or is that muzzles?) closer for a more in-depth inspection.

I love her little pink nose pressed against the camera lens, but the most hilarious of the bunch is the last, where we get a close-up view of the whiskers and hairs on her chinny-chin-chin.

There's nothing quite as nosy as a Domi-nose! And nothing cooler than Domino's chin (except maybe a "chinchilla"!).
Posted by CCL Wendy at Monday, May 25, 2009

I love how cats tend to sniff anything that comes too close! How did the camera smell? Did it smell good? :D

That is sweet. Mine like to touch the camera, too!

I love your nose, Domino! The chin shot is adorable

mommeh always tries ta get close ups of meh too- an i blur toos! we jus too fast fur mommeh arena we?

Youz haz a purr-ty kitty nose, yes, you do! We don't yike close upz too much, we squint an' make a mess of da camera lenz.

That is a PURRty pink pearl eraser nose Domino... very cute and kissable!

I never get that close to the Pawparrazzi.

Domino and her perfect little pink nose is the
cutest with her camera curiosity. These are da cutest pix!

You are such a sweetie pie Domino!

Domino - I just smooched you!