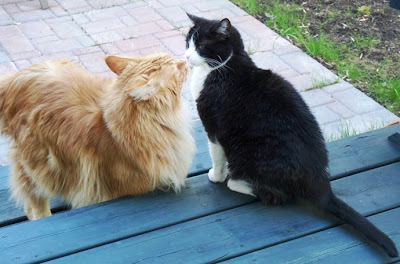 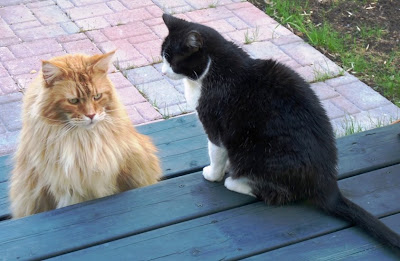 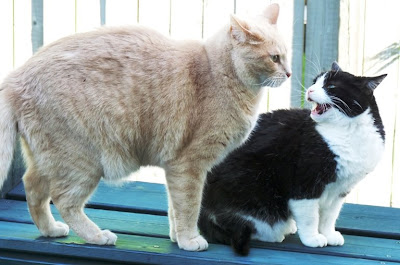 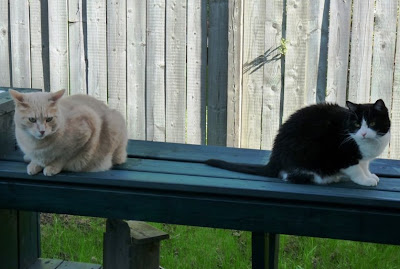 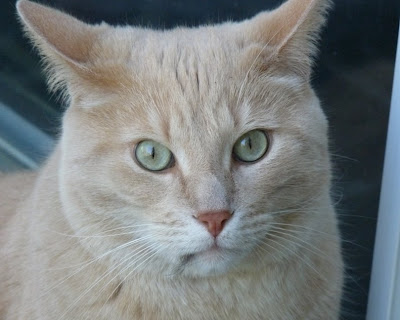 There is a definite ladder of catmand amongst my 3-Ds. Domino is the boss and runs a tight ship. She is not likely to furgive a transgression furry quickly either.

As these pictures will illustrate, Domino and Dante have a very nice relationship. Dante understands his place and gives tribute to her majesty gently and with great respect. As a result there is a harmonious balance between them.

Dylan, on the other paw, does not understand such things. Although he is the object of her derision on most occasions, he nefur seems to learn from expurrience. You will see his subsequent encounter with Domino where he invaded her purrsonal space much too closely, and bore the consequences (at least there were no scars this time). Peace is reinstated when there is sufficient distance between them, but the residual tension is obvious.

What I failed to capture was Dylan’s second attempt at intimacy with Domino. Although he is neutered, his instincts still come to the fur, and he relentlessly pursues Domino, generally by trying to jump on her back and bite her neck. This resulted in the most alarming of caterwauls emanating from her highness. This time Dylan escaped without harm, though he has purreviously been marked with the swipe of a small but mighty paw for contravening royal purrotocol. Indeed it was Domino who bore the brunt of this unwelcome encounter.

The culpurrit is pictured with the purrima facia evidence hanging from his mouth. He must learn that it’s best to leave the sofureign alone – not dangle her fur from his chops in such an unabashed manner. Next time it could well be the guillotine!
Posted by CCL Wendy at Thursday, May 14, 2009

I 'spose if 3D were chickens - you'd call it a pecking order. Hahahahaah! I peck it over Alfie, 'cos he just a wussy baby and I'm a MANCAT now!

Domino definitely looks like the boss! The last picture of Dylan is priceless!

Just like a girl to wanna rule the roost!!!

We gave you an award...come by sometime to get it!

Yep, no denying the 'evidence.' Dylan, beware...she is plotting her revenge!

Dylan do not mess with QUEEN DOMINO...

Besides aren't you engaged to a lovely black kitty in Maryland?

Great look of confusion on his face...

That sounds like what Kirby is doing to Angel! She just has not asserted herself enough to stop him

Hey guys, we awarded you with the One Lovely Blog Award - come by and pick it up at our blog!

Well, I like that Domino is the leader - the coloring seems to work nicely, two orange below the one black and white (although I honestly like any color cat - I just mean it is kind of like a uniform).

We have the same problem in our house with all our neutered male cats as you do with Dylan - I was concerned and asked the vet after it happened a couple times (the cats I had growing up were girls, who don't do this kind of thing) and he said it is more of a dominance thing than anything, well, lets go with "romantic". Floyd tried on Kirzon (who is also a boy but younger), Kirzon with Lola, and I think Virgil tries with anyone he can, but since is is the smallest and youngest he fails, and then out of desperation, will try with my arm (he is so weird). He isn't really good at that either, and as long as he isn't biting too hard, I let him try. I am actually more surprised that Dante hasn't tried anything with anyone. Floyd is our Maine Coon mix and he tries the least, maybe because Dante is full Maine Coon it makes him uninterested, or better behaved as I prefer to think of it.

Dylan, I think you must learn that girlcats rule!

Hehe these pictures speak so much about you kitties. Great photography, too!

I wuvs these pictues.

Domino I am liking you more and more. We sassy divas must stick together.

Very cute! My momma Ellie rules the house around here...and every just has to get used to the idea.

That was great! Dylan, you better watch your back! Revenge is a dish best served cold with added talons!!!

The Meezers or Billy said...

it's good to be the boss.

oh, and Miles is akshually the one who's not calm, and Billy is the added gingersnap. I am the calm and cuddly one - Sammy

It's good to be the Queen! All hail Queen Domino... or else!

Domino is having a hissy fit! And rightfully SO!

Shaggy is alpha male here, even though he & Scooby are litter mates, hes top cat.
Scout, much younger than they are (turning 4 this coming week) has been challenging Shaggy for the position for about a year, but Shaggy is NOT giving it up any time soon!