THE TALE OF THE TWITCHY TAIL! 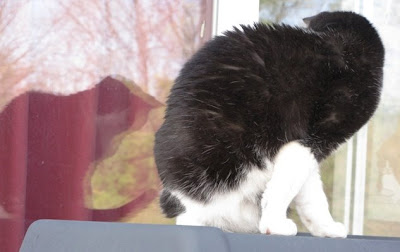 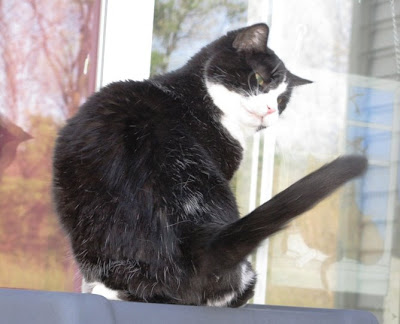 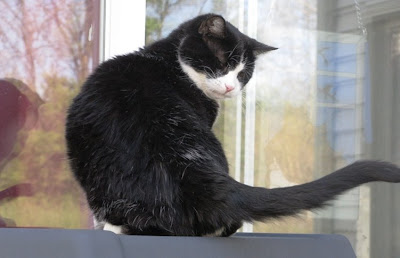 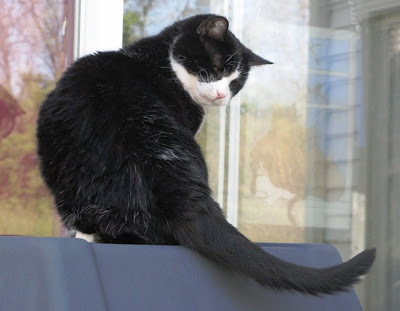 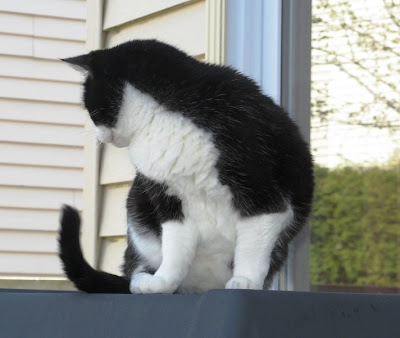 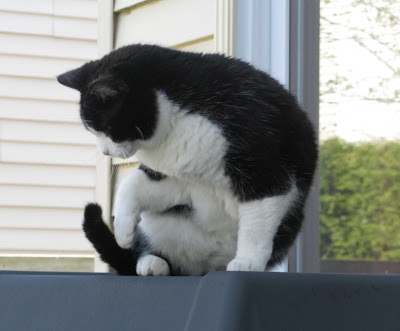 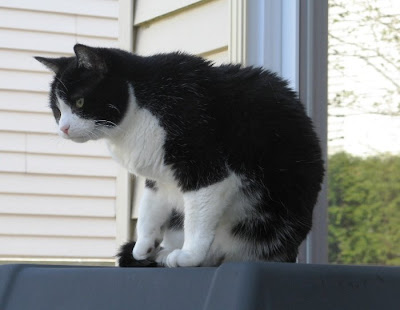 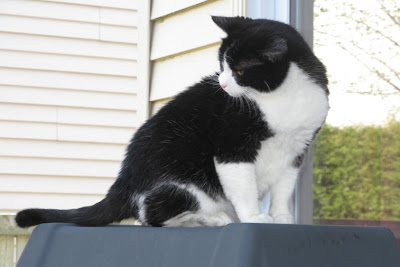 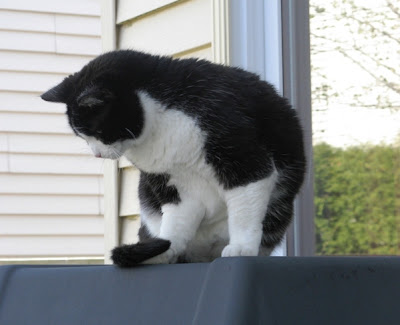 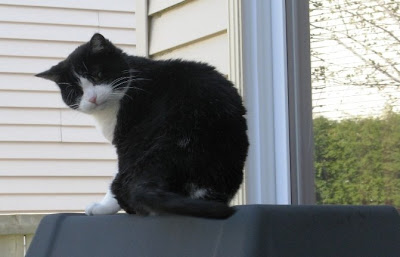 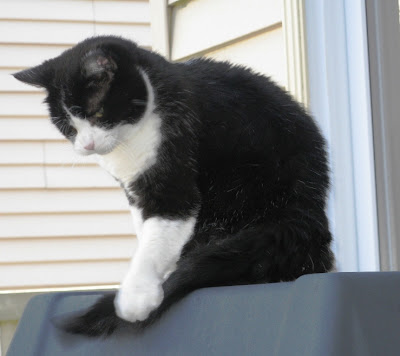 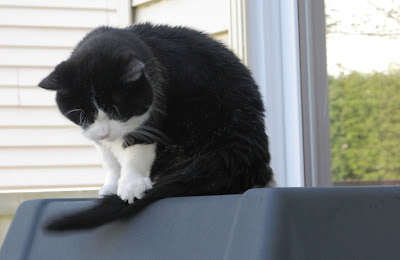 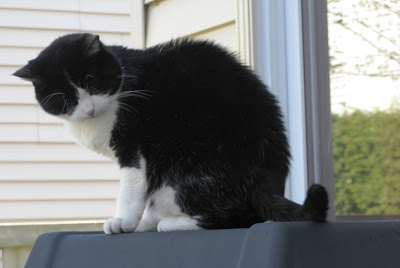 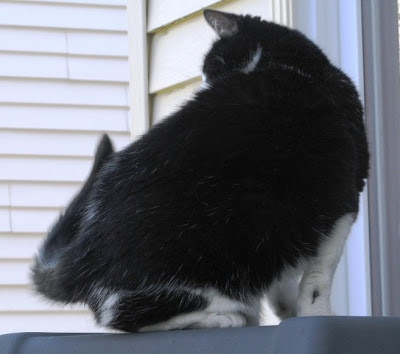 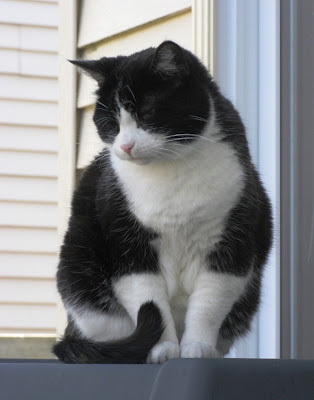 My poor little Domino is possessed by an evil tail that twitches totally out of control. Whenever these spasms occur, she tries to outrun them, and dashes about before sitting down to try to capture it.

Yesterday, she tore around the yard, and then jumped on top of the barbecue, thumping her back legs, rabbitlike, at a rapid pace. The rest of the story you can see in this series of pictures. In some, the tail is slightly blurred as it whips about unbidden.

The origins of this twitchy tail occurred before Domino became mine. As a tiny kitten, she belonged to my son's roommate, and I would see her when I visited Ryan (my son) who would even bring her to my house on occasion. She learned to really love riding in the car. The roommate never took her to a vet, so at the age of eight months she had her first (and only) litter of kittens. She was a very good mommy.

When she was a year old, the roommate moved out, and unbeknownst to my son, left Domino behind in the garage with a dirty litterbox, a little bit of dry food and no water. The garage was used as an extra room by the roommate. Luckily, Ryan found her before she perished from neglect, and when he called me and told me what happened, I asked him to bring her to me right away.

The poor little thing was skinny and flea-ridden, so we took care of that right away and she went to the vet as soon as possible. Since then, she has enjoyed a life of love and luxury, and goes along very happily except for the haphazard incidents with her twitchy tail. I figured she had just been born with random spasms that made her little tail go wildly out of control for short periods of time.

One day, the ex-roommate dropped by with Ryan for a brief visit, and he stopped to pet Domino. I was shocked and dismayed at what happened next. He reached down and pulled her tail and snapped it until it make a cracking sound. I shrieked! He said this was a "game" they always played and that she really liked it! How dumb can a human being actually be? Of course, I asked him to stop immediately and told him that her tail was now permanently injured. He just seemed rather blase about the whole thing -- but what can you expect from someone who abandoned their pet to begin with?

Anyway, this tale has a happy conclusion, because Domino is having the best life she could possibly have despite her sporadic twinges. She is a very loving pet who likes to arrange herself over my shoulder with her arms hanging down my back and be petted for long periods of time. I call her my "familiar" because she will also sit up near my shoulder, like a witch's black cat, or a pirate's parrot.

Domino rules our kitty roost and is the feistiest little thing you'd ever want to meet! The only thing she cannot control is her own tiny tail.
Posted by CCL Wendy at Thursday, April 30, 2009

The Meezers or Billy said...

we is sorry you has a evil twitchy tail. that must be awful!

we is glad, howefur, that you finded such a wonderful furefur home!

I sure am glad Domino is with you! That ex-roommate person sounds very MEAN! Pulling tails is not nice.

How did that evil roommate know she enjoyed having her tail snapped! He is just ignorant as to how to treat pets. Domino, we are so glad your Mom's son knew what the best solution for you was. You need to give Him extra headbutts!

Boy - that room-mate is one ignorant human. How'd he like something of his pulled till it cracked?

I could make a suggestion....

That room mate made us mad. How dare he think he can treat a dear little kitten so - abonding Domino and damaging her tail. We want to smack him hard. He sucks.

We are glad that there is such a happy ending though - Domino you deserved such a loving forever home. We hope you have many happy years being loved and cherished as you deserve.

Love from Milo and Alfie xx

PS: We've added you to our bloffie roll 'cos we love reading your posts. We can't promise we'll haff time to visit efurry day ('cos Mom gets too busy ::le sigh:: - but we'll visit as often as we can!

It does sound like her tail has nerve damage...that's ashame and sad...what a bad beginning to her life...Mom says, your vet should be able to help with that problem and acupuncture is also something to look into....it really works, our woofie Vet does it. We were looking at your past posts...your son has a kitten named Boomer! Mommies human son's name is Boomer and the kitten looks like our Tinker when he was a kitten! Funny huh.....we enjoyed your photo's, are you also on Flickr?

Domino's tail has a life of it's own... So does Puff-Kitty's tail! Domino has a very good life now that's FUR sure!

This is a tale that ends well although the tail story made me wail.
Domino is so fortunate to have you as her furever purrson.

Domino made it right when she adopted you. It's good that the story has a happy ending.