THE 3-Ds ARE SOCIAL BUTTERFLIES!

My 3-Ds just love to chase butterflies, but they are butterflies themselves, too -- social butterflies!  Whenever we have guests, they just line up to greet them.  And we had plenty of guests at our house recently.

In the first of three separate dinner parties, here is Domino chatting to my friend Susan on Saturday, March 27th.  Susan was the first to arrive and Domino was just being a good hostess keeping our guest amused. 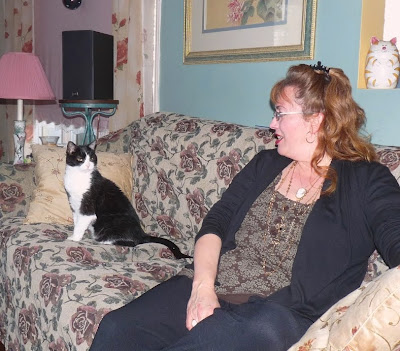 Then the first of our birthday girls, Val, arrived, and Dante got very up close and purrsonal with her.  He offered her a place to rest her head. 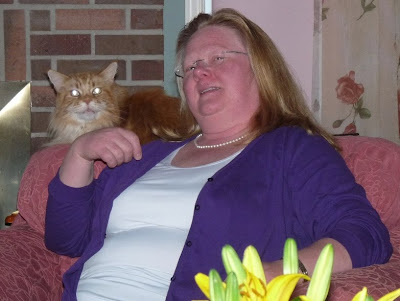 Here's a good example of how all three of my darling D's got into the act at once.  Here's Val, still with Dante as her pillow; Domino is curled up on her lap, and Dylan's at her feet. 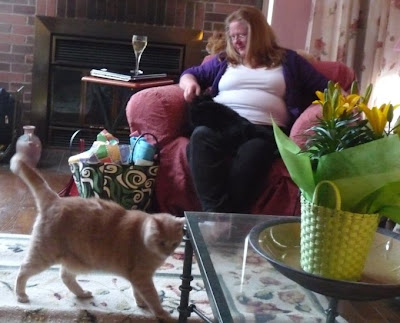 Finally, the second birthday girl, Renate, arrived, and Dylan made sure she had something to drink.  Although he can't serve her himself, he makes sure I know when the glasses need refilling. 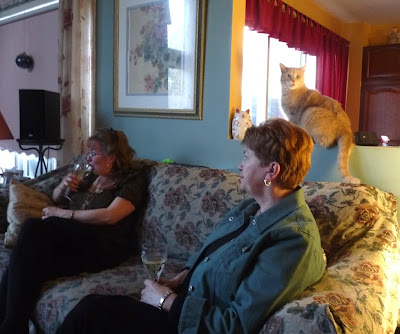 Dante was checking out the dinner table to make sure everything was ready before the guests were seated. 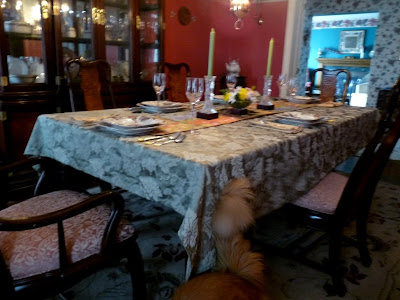 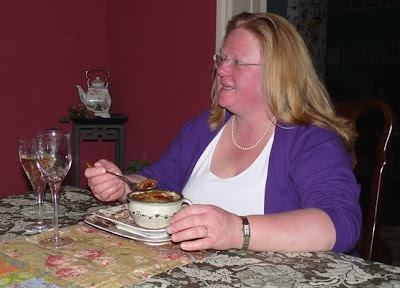 And Renate tucking into her prime rib roast beef with Yorkshire pudding. 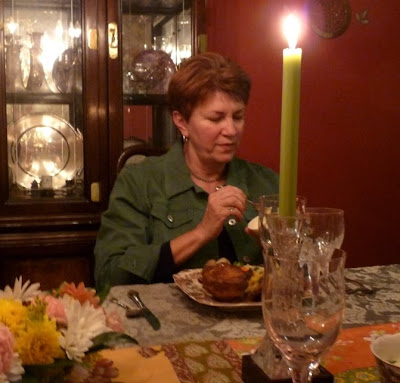 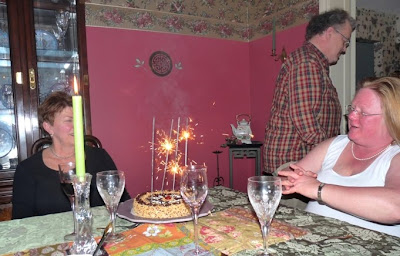 The next birthday party was on Saturday, April 3rd.  It was my brother Barry's 60th!  My father-in-law was also in attendance, as was Barry's friend Marilyn.
Dante just LOVES his Grampa  (and the feeling is mutual).  And here he is sitting by him, letting Grampa have a pat.  Just look at Grampa smile! 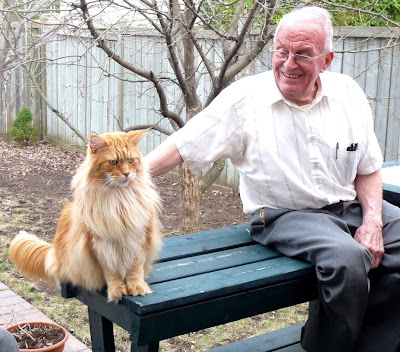 This is Marilyn getting a kiss from Dante upon her arrival. 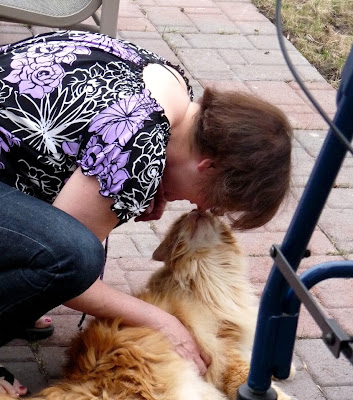 This is my brother, Barry, with his birthday cake (another Baskin-Robbins confection -- this time Pralines 'n Cream -- I'm sure Sweet Praline will approve of that one!). 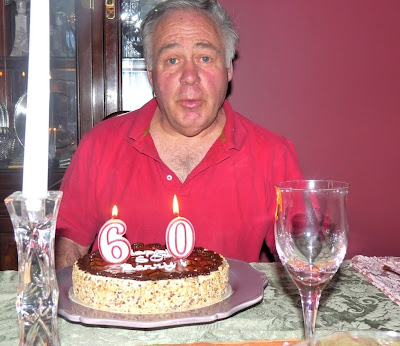 At least she waited until after everyone was finished their meal, but Domino was determined to demonstrate her atrocious table manners.
First she shows her butt to the guests. 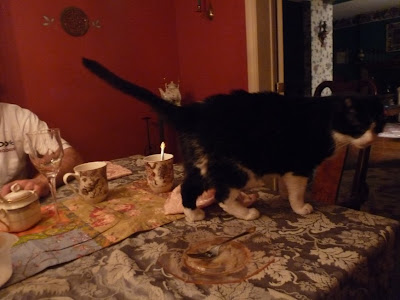 And when she finally sits herself down on a chair, she has a good scratch. 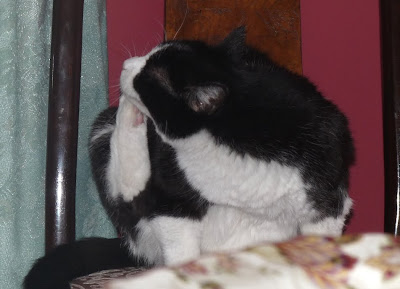 And yesterday, on Easter Monday, we had a small gathering with my brother (again), and my son Ryan.  We just barbecued some steaks.  It was something easy for a change.
We made little sausage shisk-kebabs for an appetizer, and Dante decided he wanted to get in on the action. 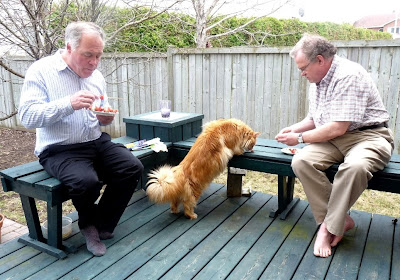 Walter dissected one of the shish-kebabs for Dante, and tore up some little bits of meat for him. 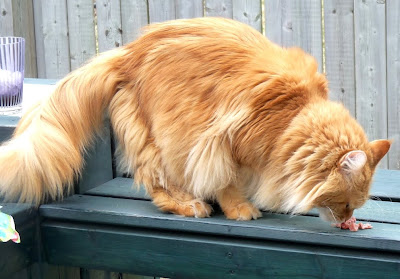 Meanwhile, Dylan says hello to Barry.  Dylan originally came from Barry's home.  Barry's cat, Dusty, is Dylan's biological mother, and Barry still has three of Dylan's siblings as well -- Butterscotch (his sister) and Caramel and Pepper (his brothers).  Coincidentally (or not), the fifth sibling lives just on the other side of that fence.  Button (another sister) is our next-door neighbour. 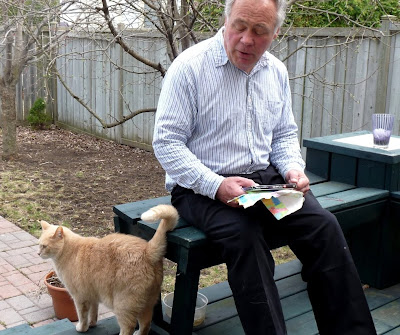 Finally, my son Ryan arrives, late as usual!  Ryan is a cat daddy to my two grandkitties, Sox and Missy (you may recall). 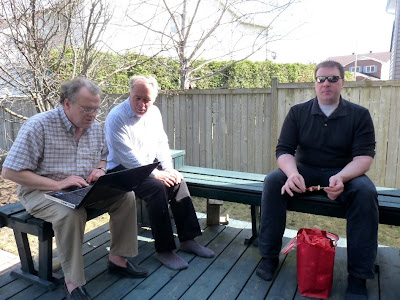 While we are noshing, the buds are just beginning to open on the maple tree in the back yard. 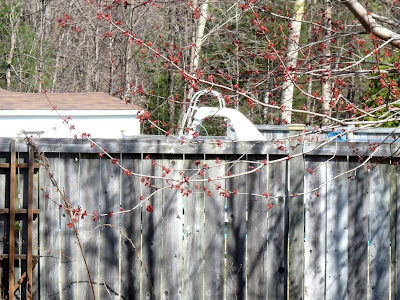 The cats are hovering around on the deck steps when Domino spots something. 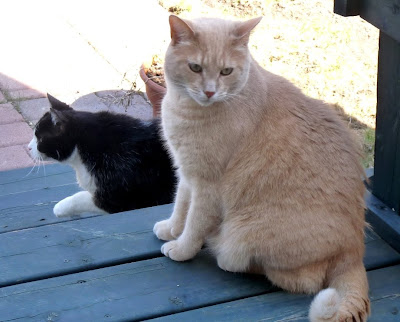 Dante sees it, too! 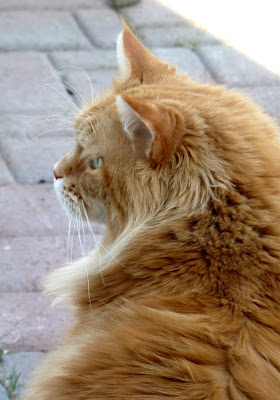 Well, what do you know!  We have an uninvited guest. 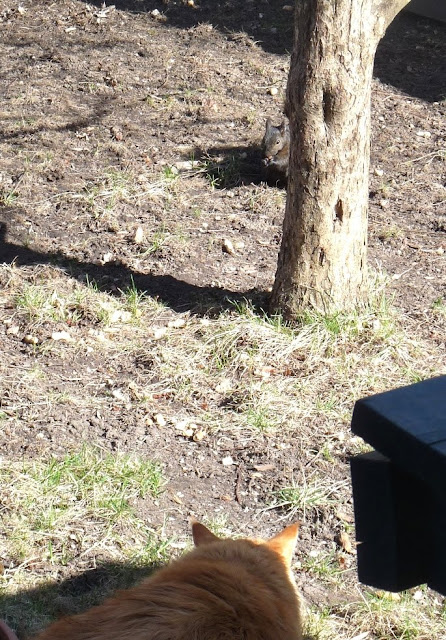 Dante welcomes the evil squirrel with open paws (and jaws).  He thinks this might make a better appurrtizer than the sausage kebabs. 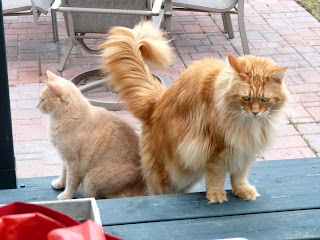 How rude!  The dang thing just grabs a nut and leaves.  Doesn't he know it's bad manners to "eat and run"?  Not to mention, it's hard on your digestive system.
Well, that's the end of the saga of the 3-Ds recent social calendar.  You can see that they've been very busy indeed, and that's why they didn't have time to blog.
Now they're back and they've got lots to say.  So drop by for their continuing adventures.  You know how much they love to have company!
Posted by CCL Wendy at Tuesday, April 06, 2010

What wonderful celebrations! Those Baskin-Robbins cakes looked soooo yummy! All the food did!

Annie and Derry are pretty skittish around other humans, though if you stay overnight they'll venture out. Depends on who is visiting! Nicki usually has to be in the thick of things, but that's more his curiosity.

Chumley used to be very wary of other humans, particularly men (he'd been mistreated by a man or men was my guess). He was better with women, would flop down for tummy rubs. The only man he never shied away from was my dad--I wondered if there was some sort of genetic similarity to our scents.

Wow - you were certainly busy this weekend - no wonder we didn't hear from you! Looks like the parties were great!

You three are so welcoming to your guests!!!

Grand celebrations......thanks for sharing them with us. xxxxxxxxxxxx

My dearest Dante, I was so worrieds about you when I didn't hear from you over Easter - especially since I PURRsented you with a special card on my bloggy.

It looks like you guys had some wonderful guests and celebrations=how fun!!...Your babies are all so sweet to meet and greet all your visitors; we love how social they all are!...Domino on the table was funny; Mom says it reminds her of us!...We're glad you guys are back, we've missed you all!!...xo...Calle, Halle, Sukki

Wow! Things have really been busy around your house lately, haven't they?

They are very good at social gatherings!

Looks like some great dinner parties and the three D's were very good with their socialising.

We all enjoy having guest scritchers and food givers visit, too!

That is great that they don't mind when there are people visiting. We are so so with it - Virgil and Lola are bravest. But even they don't come down too often. Kirzon will come down to see if there is tasty foods, but otherwise he stays upstairs.

WOW! The 3-Ds are REAL PURRty animals... eFUR since the one human kitten got rougher with us- we don't really stick around much anymore when there are too many companyz! You must have really well-behaved companyz! Mmmmmm! Looks like your mom served up some really good noms too! YUMMO!

Parties are always fun especially when the human parties spill over to kittydom!!!=^Y^=

Nice to see you greeting your guests! My momma Ellie, Bennette and I love guests too...but everyone else is not so sure! I like it when guests give me cheese!

Dante, Domino and Dylan sure are good hosts!! They make everyone feel quite welcomed!!

What great socializers the 3-D's are. They were so good to all of the guests, and generally such good manners. We didn't know Domino did lap sitting.

Kitties can always be relied to hang around dinner parties, or food gatherings (as long as there's no noisy children abowt!).

In case yoor wondering where Dommy is, she over at my place enjoying a play date. We're gonna play THoE ferst, then we're catch some sunbeams, then lunch togevver, the chase Alfie!

JAMOCA ALMOND FUDGE - YUM YUM !! Looks like you are a wonderful hostess. Loved your comment on 'late as usual' sons - I have one of those sons too. My Gracie looks so much like your Dylan. She is that same creamy color. When we found her she was tiny, sick and starving. Two years later she is a fat and sassy gal !

This doesn't surprise me with Dante especially. Coons are so social and so gentle it's only fitting that Dante demonstrates this perfectly. Domino's just a little cutiepie! But the cutest littlest cats tend to be the spunkiest, probably because they know what they lack in size they have to make up for somehow! And Dylan - poor guy in the middle... with such a HUGE big brother, I can imagine he gets the wrong end of the wrasslin' matches quite often! But they are all so adorable!

you all are verreh good and proper hosts. verreh polite and congenial! i am so glad to see that you had such an excellent time at your string of dinner parties.

Goodness what lovely celebrations you have!! We tend to make ourselves scarce when people come over.

Wendy, it's so nice to be part of your virtual family and share your celebrations!! Thanks!