FRIDAY ON THE FENCE WITH DYLAN

Dylan is usually a fence-sitter.  He loves to stand up there on the fence and view his territory from on high.  However, more recently he's taken up fence-walking as a his latest hobby.  He's found you can cover even more ground that way -- without ever touching it (the ground, that is). 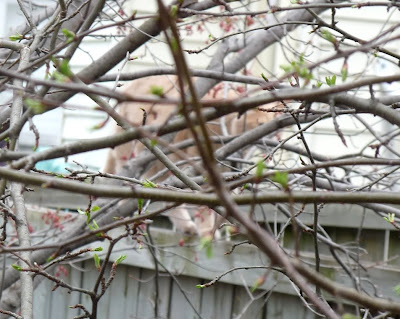 Our first glimpse of Dylan is through the branches of the budding trees. 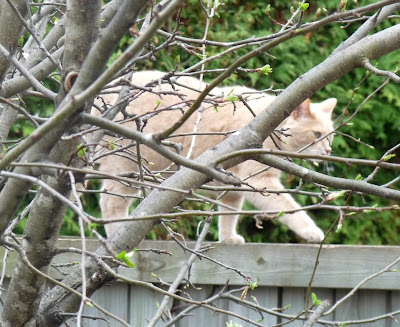 He's walking along rather confidently, with the fine coordination of an acrobat on the balance beam. 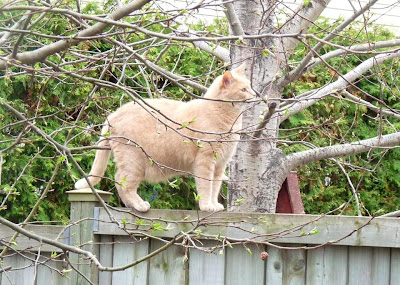 It's time to stop and smell the branches (there weren't any roses around, so this will have to do). 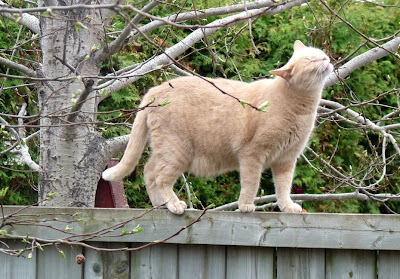 "Hey Buddy", Dylan says to the budding leaves!  He always likes to to make new friends, you know.  "Can you come out tonight?" 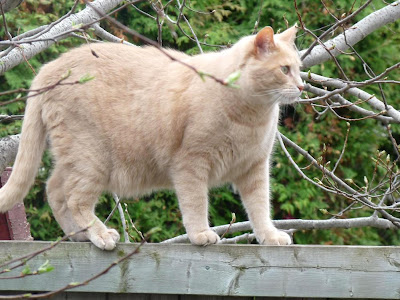 Dylan takes time from his budding relationship to hone in on something rustling in the neighbour's yard. 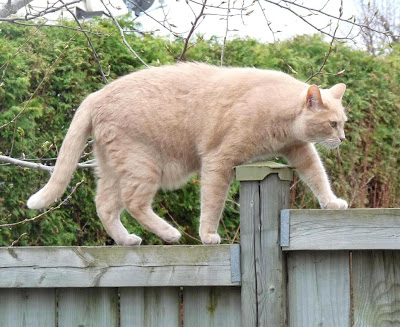 He gradually moves TOEward the sound to investigate.  Watch out for that post!  Those things can really trip you up. 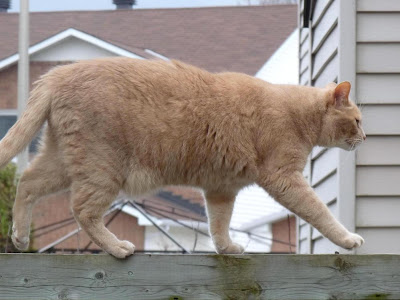 Post post, Dylan moves along with confidence once more.  He may even have exceeded the fenceline speed limit from all appearances. 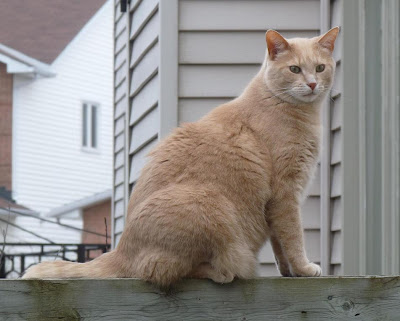 Having located the general location of the sound, he screeches to a halt and looks in my direction to make sure I capture his good side. 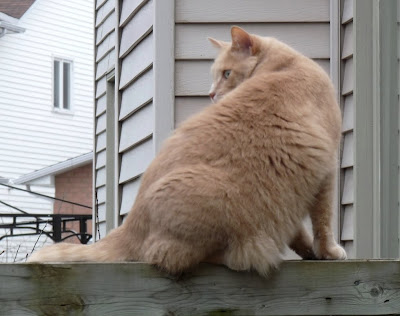 Dylan looks around him to make sure no one else is watching.  You never know who you can trust (except your good buds, of course). 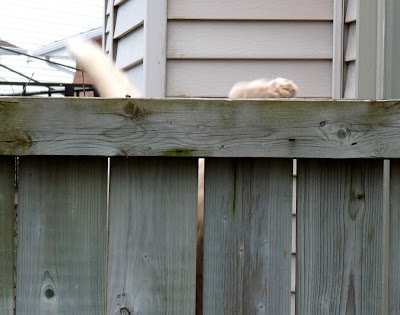 Then suddenly, without further fanfare, Dylan does a fence dive -- head first, into the next-door neighbour's yard.  (His sister Button lives here you know, but is inside at the moment). 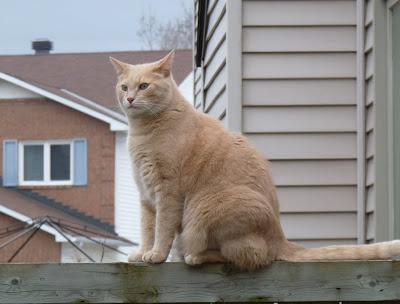 After thoroughly checking out the source of the sound, Dylan makes a very sudden reappearance atop the fence.  Whatever he saw, or smelled seems to have rattled him.  His face has a very sober look, and his ears are a-twitching something fierce.

"Rejected, again!", Dylan sobs.  He had checked out Button through her patio door, but she always shrieks and runs away.  Button's mama has told me that she is absolutely terrified of Dylan.  However, he is determined to try to win her over.  She's his sister, but she doesn't remember him at all.  If only she would give him the time of day, Dylan's sure he could make her his friend.

In the meantime, Dylan must console himself with the fact that he made a few new friends today, even if his sister is still estranged.  "She very estrange, for sure", says he.  And he dreams of the day when they can sit on the fence, together.
Posted by CCL Wendy at Friday, April 09, 2010

Oh, dear, shunned by his sister! We can understand why he'd be upset. :-(

On the plus side, he certainly did make friends with some of the buds. Plus he did a great job navigating the top of the fence!

Oh that is so sad that Button doesn't remember Dylan. But I guess that is how it goes with kitties. But at least he has Dante (and Domino, though I know they don't get along all the time) and his new buds!

Poor Dylan....you are such a special fella....we are so sad to hear that Button doesn't remember you and is afraid of you.

You are such an accomplished fence walker, Dylan.....xxxxxxxxxx

That was a fun adventure with Dylan - sorry Button wasn't so cooperative! Maybe someday!

Poor baby, shunned by his sister, maybe that will change. I LOVE the photo of his foot as he jumped off the fence!

We're so sorry your sister is a afraid, Dylan; she's sure to come around once she realizes what a sweetheart you are!...We are impressed with your fence walking skills, you look like a great watch cat!!...Have a happy weekend, you handsome boy!...xo...Calle, Halle, Sukki

OMC not next to Dante, you really see he's quite the big cat too! Such a handsome guy!

Poor Dylan. It is sad that your sister doesn't remember you.

With the first fuzzy picture we heard the tune of Jaws in our head, but that changed to the Pink Panther theme when we saw Dylan walking on the fence. Surely his sister can't resist him for ever?

ROFL! Not so strange that sibs are estranged! At least with bean sibs. (Sorry Wendy, but you started it!)

Loved the walkabout with you Dylan!! Be persistent & hope she comes around!

Poor Dylan! You are such a handsome and talented mancat. Too bad your sister can't see that you're a gentle soul (although we have heard from Domino that sometimes you are pesky).

Dylan you are mighty handsome up there on the catwalk!
What a great way to navigate!