On Wednesday, over on Dante's blog, I posted pictures of Dante's encounter with a woofie.  You can go to "All About Lacocoon Dante", here, to see if you want, though I'm posting one of the pictures again today.

In any event, after the woofie, named Rascal, left our yard, the other two 3-Ds had a regular "field" day checking out what remained of him.  This is what I call the "aftermath" -- in this case very much like scented "aftershave", except you just get a whiff instead of a wallop! 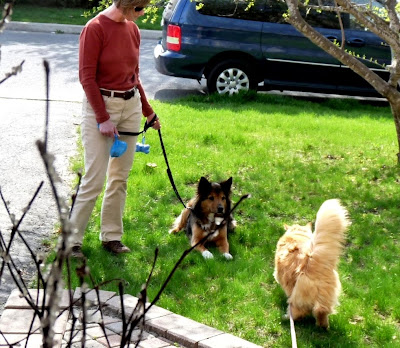 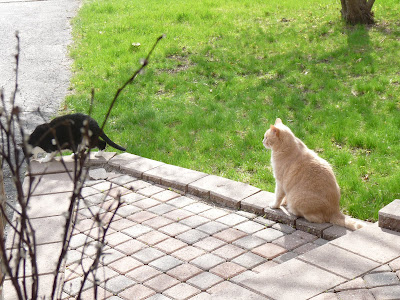 Several minutes later, after the woofie has departed, Domino and Dylan get down to business. 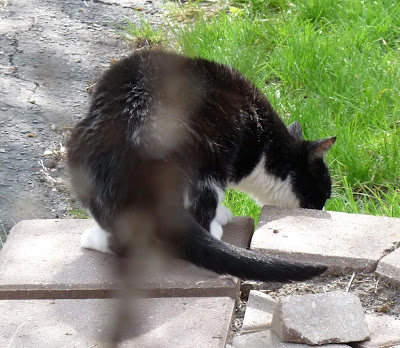 Domino, in yet another of her famed Tai-Chi positions, gets a whiff of the woofie-scented grass.  (Look how her tail goes one way and her left foot, the other!) 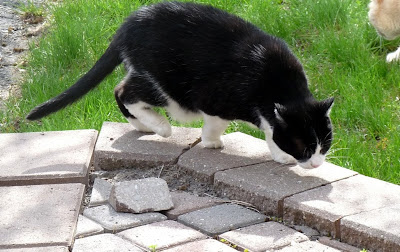 Then Domino hits the bricks!  There's Dylan sniffing things out in the background. 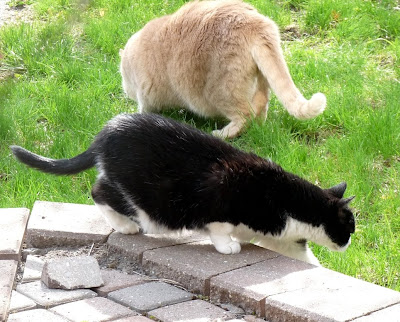 Here the two of them join forces; Domino in yet another Tai-Chi stance. 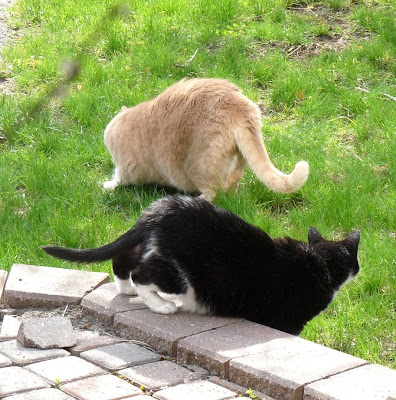 While Dylan's busy with his nose to ground, Domino is still in slow motion. 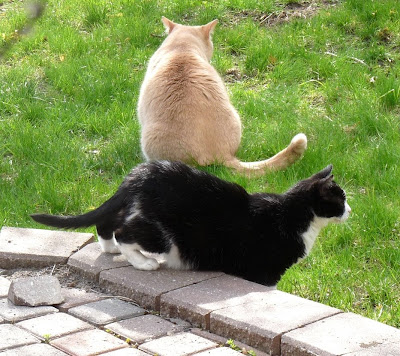 Dylan comes up for air, and Domino's still holding.  Tai-Chi requires lots of patience and endurance. 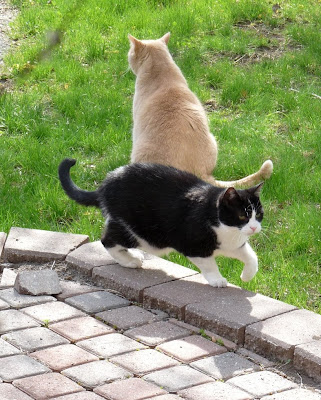 It turns out Domino's move was just a fake out!  She has better things to do.
Meanwhile, Dylan is still immersing himself in "eau de woofie" (didn't I say it was like perfumed aftershave?).
So, we hope you have enjoyed seeing the after-effects of woofie visitation chez the 3-Ds.  As you can see, Domino turns absolutely everything into an exercise in Tai-Chi.  To her, every occasion is black-Tai!
Posted by CCL Wendy at Friday, April 30, 2010

The SCENT of a Doggie! That had to be quite intriguing to the kitties!

Great pictures. we have our very own doggie to sniff.

LOL! There would be very interesting scents to check out after that "introoder!"

He was a cute woofie! You would think the whole yard would have been covered with woofies from the looks of your kitties!!

You had us MOL-ing about "Eau de Woofie"! We love the size somparison of Dante and the doggie!

That's funny! You are still much braver than I would be with woofies around.

yoo can come over and sniff my garden anytime!