Of course, being Tuxy Tuesday, my little Domino is the prime focus of today's post, although her brother Dylan also makes an appearance.

Dylan isn't the only one who does daily rounds of the home turf.  Domino has her own routine.  She does some scentmarking, but isn't as diligent about it as her brother.  Domino's more interested in maintaining her dominance over others. 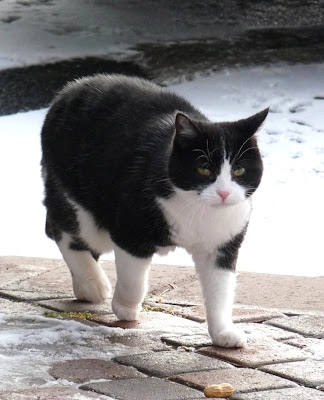 Here she is beginning her stroll.  Due to the amount of snow she doesn't do her complete rounds like she would in the summertime. 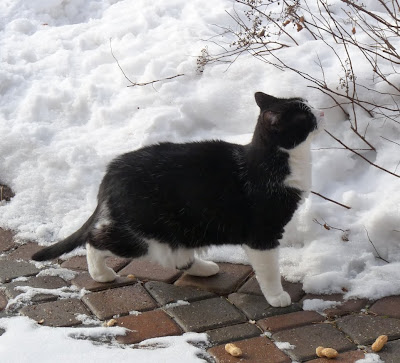 She, too, stops to sniff the bushes, but doesn't bother to leave her own scent upon them. 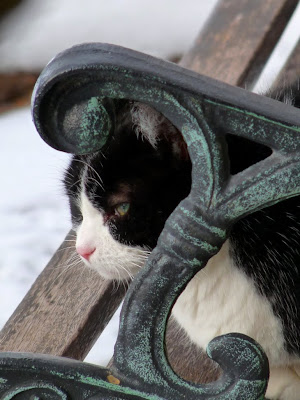 Domino settles down on the bench in her prescribed spot.  When I'm on the bench she likes to sit right there beside me. 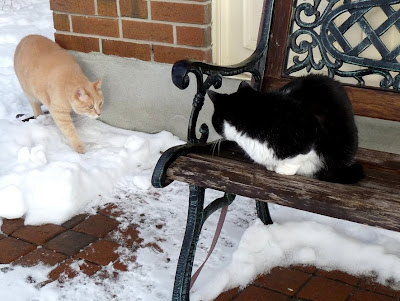 Uh-oh, along comes Dylan!  Domino knows that this is potential trouble-in-the-offing. 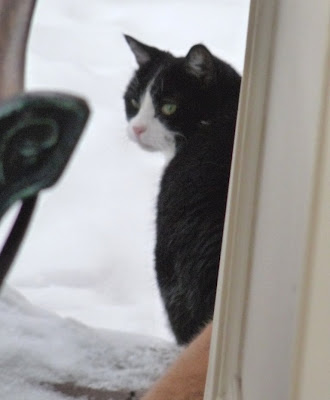 Domino decides to get down and let her troublesome little brother pass. 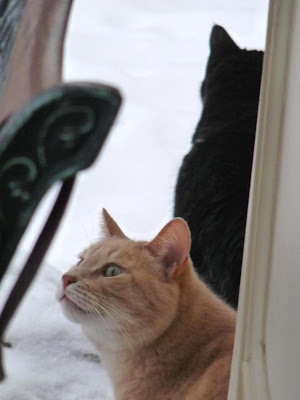 Here's Dylan pretending to be very nonchalant.  Domino has let down her guard, you'll notice. 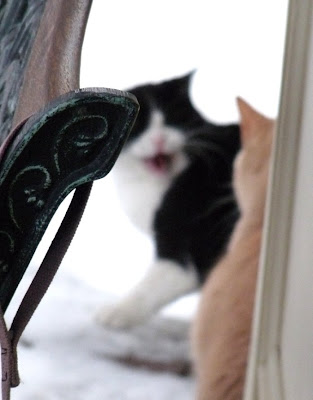 And the ultimate encounter -- it was inevitable!  Little Domino enforces her purrsonal space.  And Dylan better respect it.  Domino may be small, but she is mighty indeed. 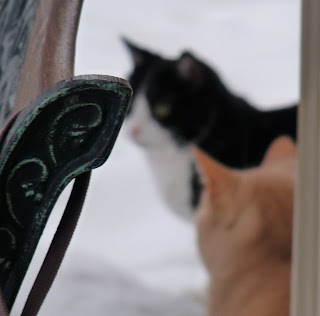 The moment has passed.  Dylan has been warned, and he backs off acknowledging Domino's place in the feline hierarchy of the 3-Ds.  Domino's the Queen!

Domino is just pawsome! We ALL love her in our howse (me espeshully)!

I loved taking a stroll in the snow with you, Domino!!!

And Domino should be Queen....we think she has such a regal appearance. Wonderful pics.......xxxxxx

Check out that powerful Domino....is she trailing those peanuts to see who may have invaded her turf?

Domino may be a tiny tuxie, but she is mighty in spirit!

Good for Domino! Show those mancats whose boss. You are such a pretty girl.
cindy

Of course she it Queen Domino! And the boys better remember it!

Way to go, Domino! You're my hero!

Baby loves seeing Domino defend her space against Dylan. She has to fight off Jack all the time. She thinks Domino looks fierce and feisty.

I love a Kick-@ss Tuxie!

Domino you grace the cat blogosphere on Tuxy Tuesday so PURRfectly!!!