These are some more rare pictures of the 3-Ds taken all together from two years ago.  The sun was shining and it was relatively warm, unlike now, so they all took the opportunity to get some fresh air, and didn't beg to get back inside right away.

All of the pictures are taken in the front porch area, because the snowbanks were fairly high, which precluded climbing.  The snow actually acts as a kitty corral in the winter time.  No kitty likes to wander too far from the front door when there's an abundance of cold, white stuff on the ground. 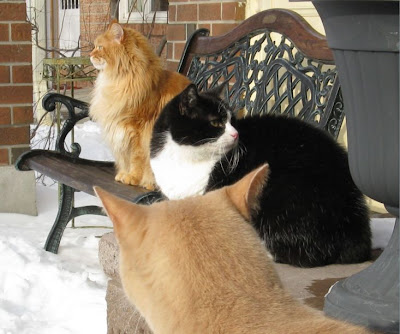 Here they are scoping out the winter scenery (and the front door, in Domino's case -- she just wants to make sure it's still there). 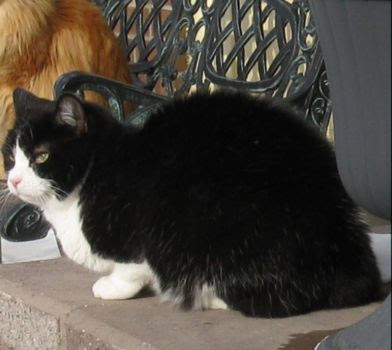 And here's the lovely Domino enjoying a bit of sunshine on a warm winter's day. 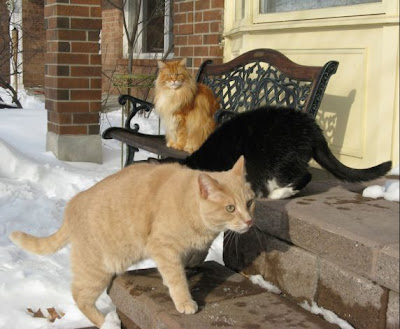 Time to switch up positions -- all except Dante who seems content to stay put on the bench. 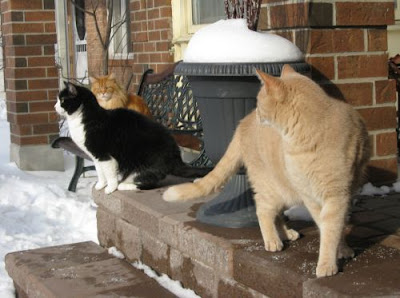 Domino appears to be the center of attention, here! 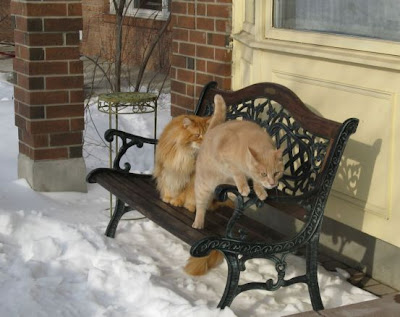 Dylan is poised to leap after giving Dante a good view of his back end!  Dylan is our expert jumper -- he can jump far and high. 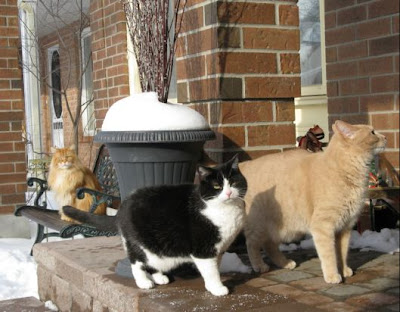 Looks like there may be some consensus about going back inside, though Dante's still quite happy to keep his station on the bench.  Might as well enjoy the sunshine while he may.  Come on, tough it out, guys! 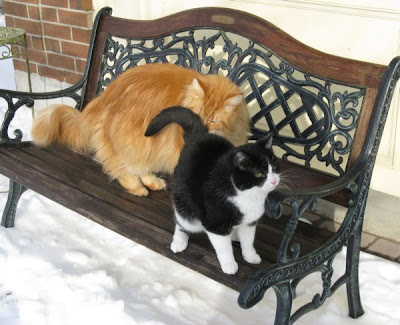 Here Dante is getting a little whiff of "eau de Domino"!  He tends to like to stick his nose up her butt -- what can I say?  Part of being a mancat, I guess. 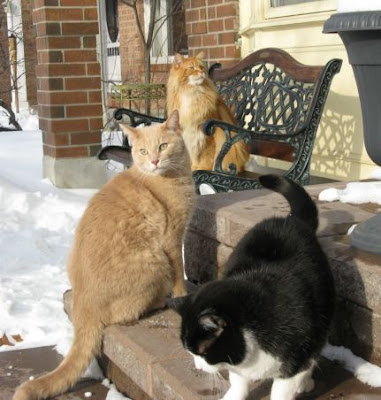 I think this is the best picture of the entire series, because all three make a good composition, and there's a hint of movement and something that piques their interest, from the expressions on their faces. 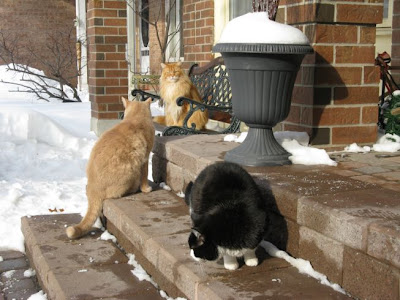 Though this one has just slightly shifted positions from the last -- it doesn't have the same pizzazz. 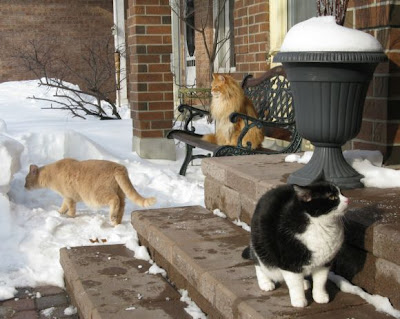 Ah, now here's another good one!  There's definitely some activity going on.  Domino looks like she's been startled by some noise, while Dylan is busily investigating the snowbank -- perhaps looking to make a deposit?  Dante looks as calm and cool as ever -- quite immutable and serene. 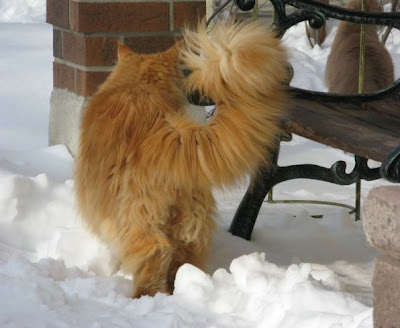 And finally, they're off, so we'll say so long.  Dante and Dylan have gone exploring between the houses (don't worry it's all fenced in).  And Domino has simply disappeared!

We hope you have enjoyed this nostalgic look back at the 3-Ds of Winter 2008.

Great series, Wendy! Had to laugh... making sure it is still there is sooooo important!!

Those were great pictures.

We always enjoy seeing your evocative photos of your 3D Cats!

Dante is a very wise supervisor.

You're all enjoying that sun and snow! Great pictures!

We like that one picture of all 3 that you like best too. It's a nice composition. We don't often pose together for pictures.

Lovely pics. How nice to get the 3D's togevver in a pic.

Great pictures. There's Dante sitting like a king on the bench, watching his domain. And allowing the other kitties to do as they please.

LOVE the 3-Ds all togeFUR! Dante looks HUGE even when he is in the background! Congrats on him being on the FURont page of I Can Has Cheezburger- it's still there!!!

Awesome all 3-D's in almost every picture!!

Great pics! I agree with the one you thought was the best. Of course they are all good :)

Those are cute pictures! I like that the snow acts like a corral - that way they are closer together and hopefully we get more pics of them all together!!

We agree--Dante is looking very regal and the other cats are scouting the grounds for threats (and disappearing front doors!) Lovely photos!

We agree--Dante is looking very regal and the other cats are scouting the grounds for threats (and disappearing front doors!) Lovely photos!

Wonderful post and wonderful fotos. We didn't realize Domino was so small until we saw her standing next to Dylan. She is a real cutie and we can see why Milo is so "smitten" with her. And both the mancats are handsome dudes. Stay warm dear friends.....xxxxxxxx

Great photos. Dante seemed happy to sit and watch with all his floof to keep him warm.

It's funny how all three can be in the same general location but have completely different agendas!

We love the photos!!! I'm sure it must be hard to get everyone together. Sometimes I have to stalk Katie for a whole day before she allows me a shot.

We love these! We think Dante is obviously the wisest, keeping his spot on the bench!

The only time we are all together is when we are eating and sleeping! Mom says neither of these activities make especially good photos. Maybe we should eat and sleep more?

We love those photos. To get all 3 D's together is amazing.

Lovely photos of them all, none of them look a day older now than they did then! :)