Now that Christmas is over (though the season is not), Dylan is busy helping Canada Post to deliver all of the packages that didn't arrive on time.  These were the gifts ordered by humans -- not by Santa (as you know Santa's always in the "Nick" of time). 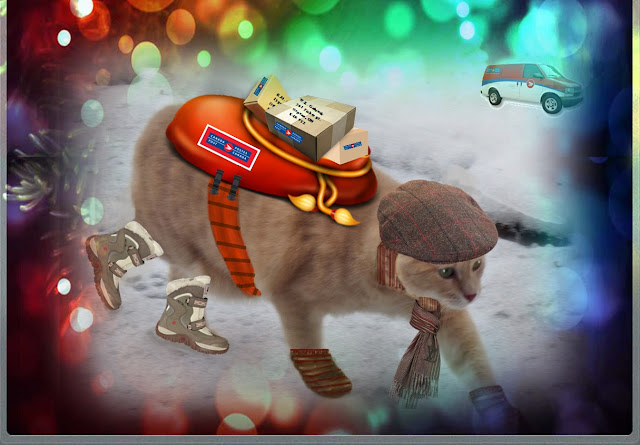 Dylan doesn't think these poor folks should have to wait a minute more, so he's being as quick as he can.  "I'm innit fur da long haul" says he.

He's well prepared for the cold weather with a brown wool flatcap with red and dark green stripes.  Around his neck he has one of his own Christmas presents -- a striped Louis Vuitton scarf, in shades of tan and red, as are his woollen mittens.

To keep those toesies from getting frostbitten, Dylan has some very warm taupe and ivory fleece-lined boots with rubber soles to keep his feet dry.  They also have touches of red which is nice but not as important as their ultimate function.

Dylan is using one of Santa's empty sacks (with the approval of Canada Post, of course) to help transport these wayward packages to their final destination.  His training as a Christmas reindeer has certainly prepared him for this task.  "Imma regulah beast o' burden" he remarks with a sense a pride. 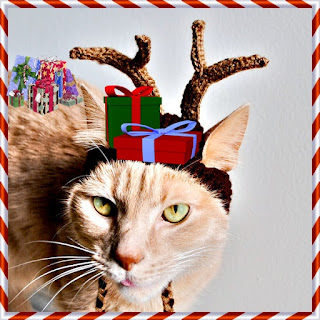 And next year Dylan's looking forward to starring in a new Christmas comedy called
"Carry On Reindeer!"

You will be a hero to many handsome Dylan!

YOu are a good delivery cat!