TUXY TUESDAY WITH DOMINO: WHAT A PUSS!

It's very difficult to take a bad picture of Domino. Whether in a pretty frock or her own tuxy coat, she is a natural model.   Every inch of her tiny frame is so expressive. 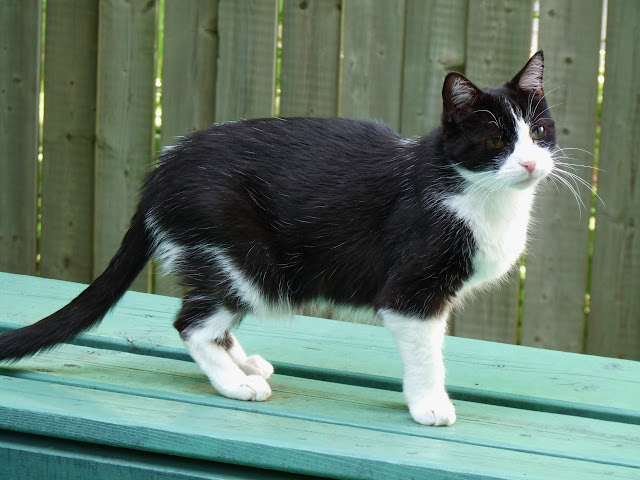 As we begin, each paw is PURRfectly positioned and there's not a hair out of place! 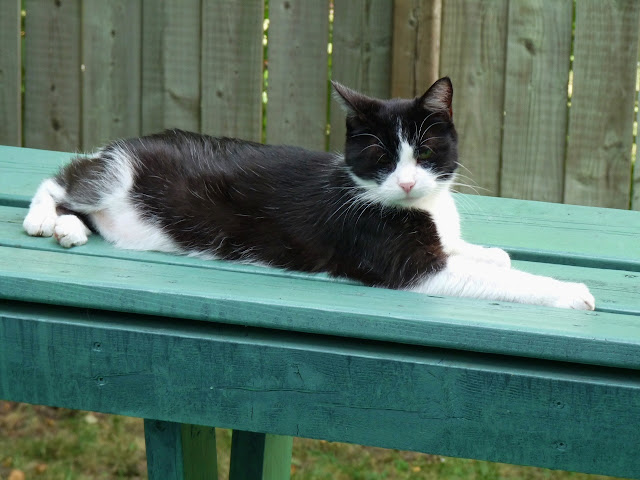 Then, as if on cue she gives the camera a sultry look and a pose to match! 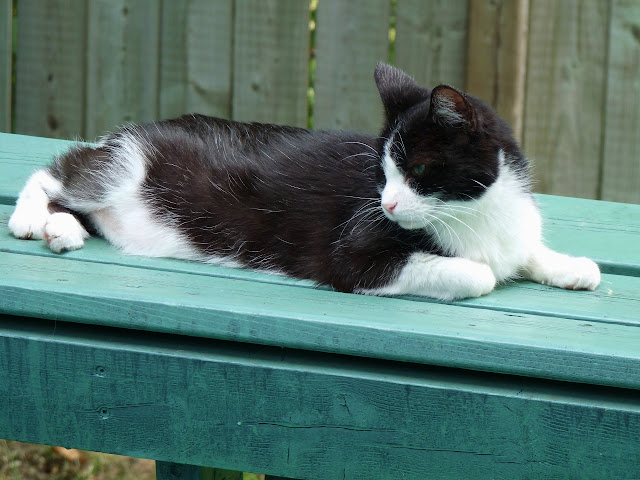 With one sweep of her head she becomes suddenly shy.  Quite the little actress, n'est-ce-PAW? 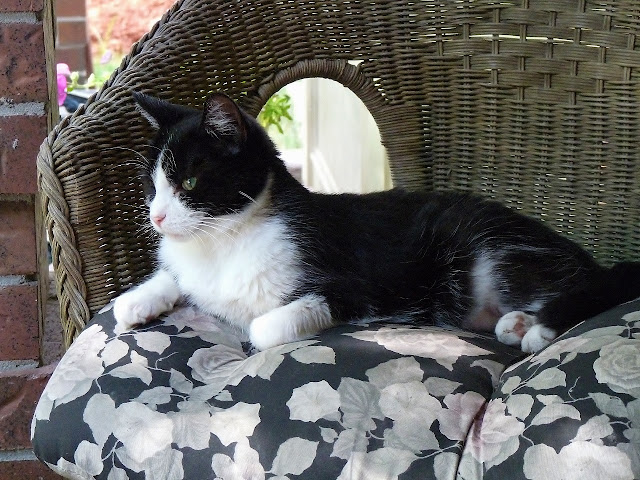 Here Domino PURRches prettily on the porch without a care in the world -- or so it would seem. 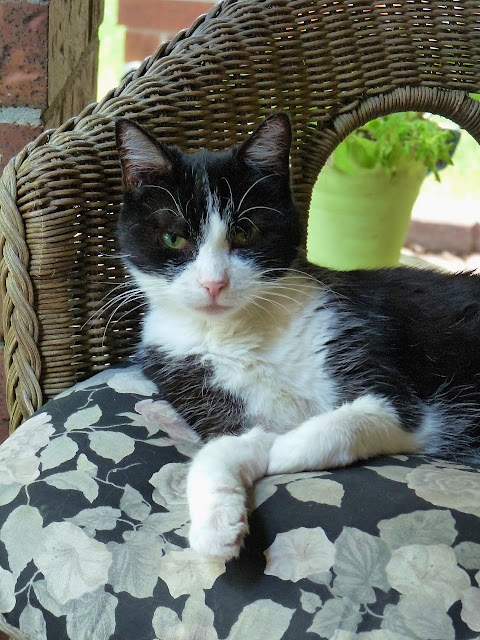 She then invites you into her world with a steady gaze ... 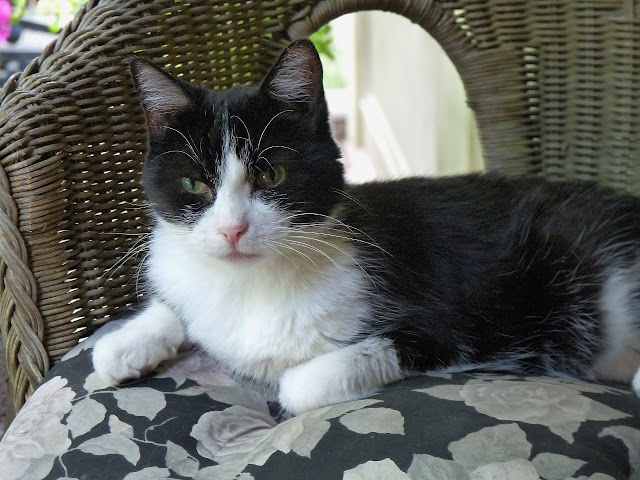 Domino is elusive.  Before your very eyes, she has become a captive of the camera once again.   She is both captive -- and captivating! 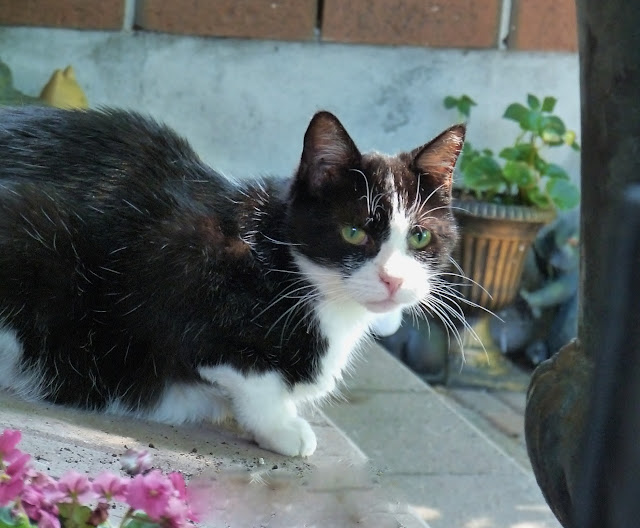 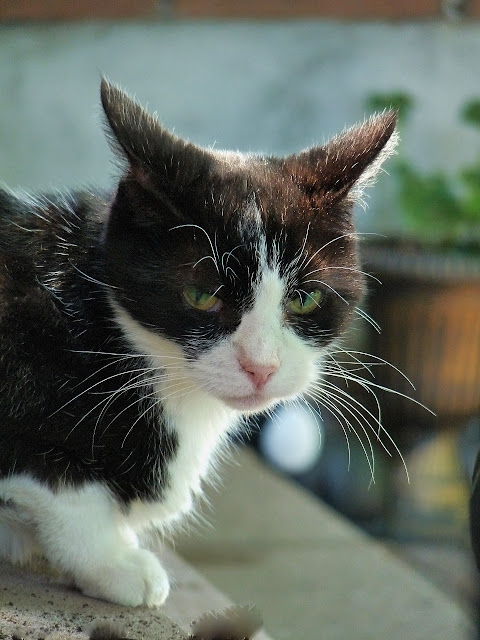 And then it all screeches to a halt!  Domino's look speaks volumes.
"I has had enuff -- now get outta my face!" says she.

I never get tired of admiring her beauty!

She is a total beauty; that girl owns the camera!!...Have a fun week, sweet friends...Calle, Halle, Sukki
PS...Smoochies to my handsome sweetheart, Dylan...xoxoxoxoxoo...Halle

We wonder how you stay so calm with two brothers Domino.
Luv Hannah and Lucy xx xx

You are such a beauty sweet Domino!

That last picture definitely is a look of 'back off'. But those are terrific pictures and we love the comments on them.
Thanks for the good wishes for Mahoney. The Person has been a wreck for a couple of days now. But she feels a tiny bit better now since the vet said that if we can't cure Mahoney, maybe she can learn to live with this problem. Don't know how that will work, but we sure are willing to try. Beats the alternative.

Domino is a natural model... down to the diva-tude!

We think Domino is so pretty. Are we seeing some white furs coming in her black furs?

Oh My Cod! Domino is just too beautiful for words! Unfortunately I am spoken for, but if I am ever free, I will lay myself at your wondrous feet!
Kisses
Kozmo

I love your attitude Dommy! Hahahaa!