MANCAT MONDAY: DYLAN ADOORS FALL (AS LONG AS IT'S OPEN)!

Dylan is more than a little hyPURR.  He flits here, there and efurrywhere during any given outing.  For him, I must leave the door open, even if just a crack, so he can make hasty retreats into the house should something alarm him.

He seems to be PURRpetually in a state of heightened alert.  You can see it from the look on his face to his helicopter ears to his sniffing nose.  Dylan takes all possible precautions against -- well -- efurrything!

The only time when he seems to relax is when he's looking at me or sitting beside me.  I guess he knows that even mancats need their mamas sometimes. 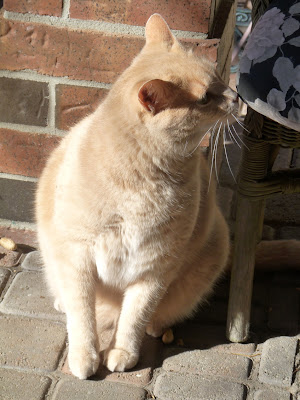 Dylan takes a brief whiff before leaving the safety of the porch -- and mama! 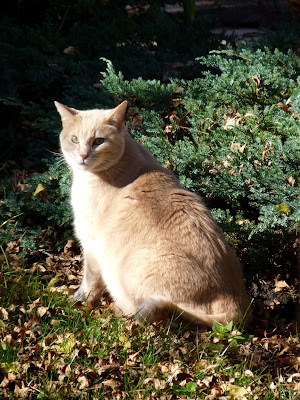 He's checking out the neighbour's yard, but not without a backward glance -- at mama! 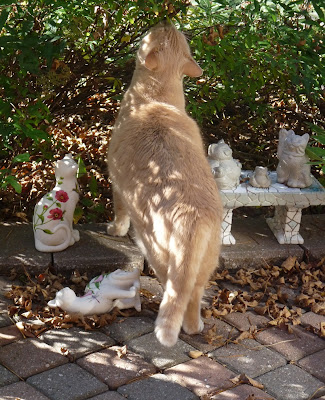 Hmmm!  I think we all know whose scent has been trapped in the bushes.  Their initials are V.S. (aka E.S.) 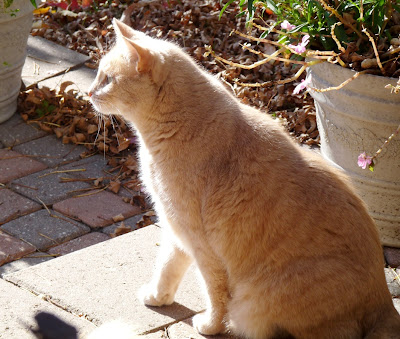 It's a beautiful, clear, sunny day.  So Dylan can see for quite some distance. 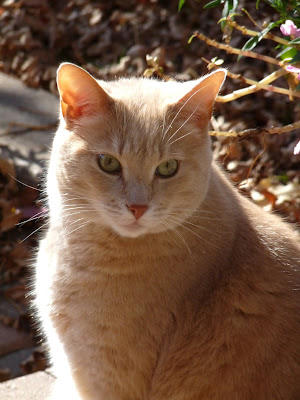 But a look back at mama, never hurts.  A real mancat still keeps in touch. 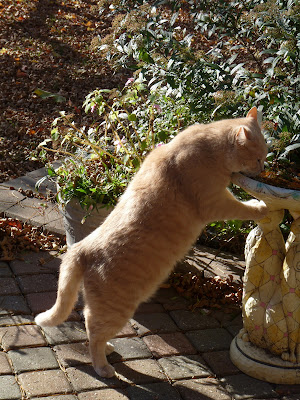 Sometimes, it's necessary to sample something from the refreshment stand. 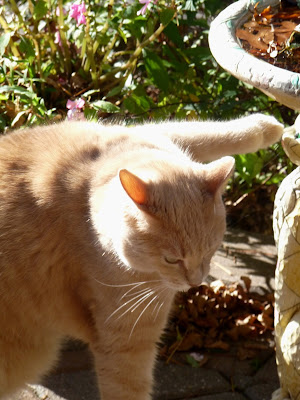 It's even tastier now that the fall leaves have flavoured it with their essence. 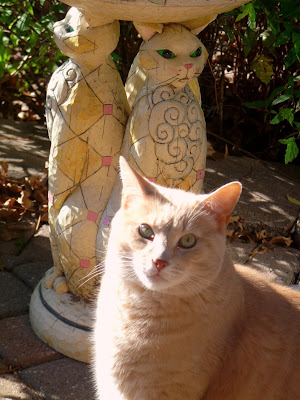 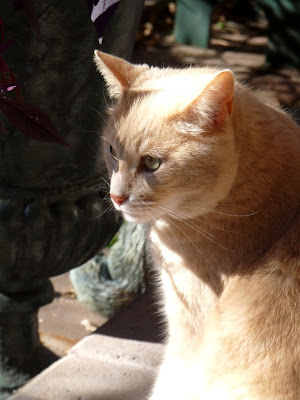 Sometimes keeping a lookout requires a certain amount of stealth. 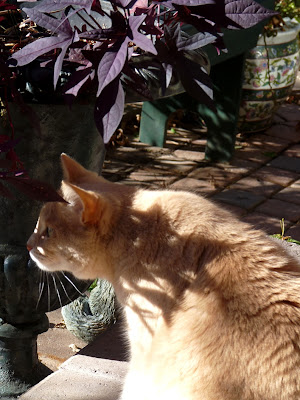 So, being at least partially CATmouflaged, Dylan adopts the position I like to call "curvature of the spying".  It seems to be something most cats do when they're watching something intently.  They lean forward with a curved back and a slight crouch. 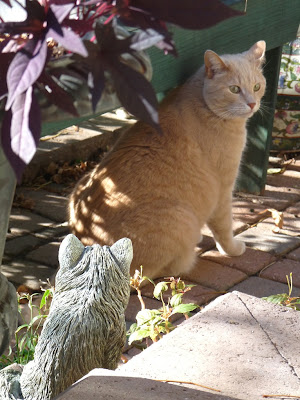 At times the bench has also provided shelter from possible attack.  But Dylan checks back to make sure the door is still open, anyways. 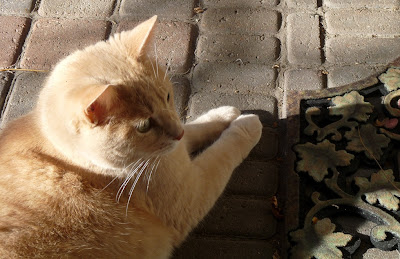 Dylan takes a PAWS to relax.  He's resting at mama's feet, and pointing to the new doormat.  Isn't it pretty? 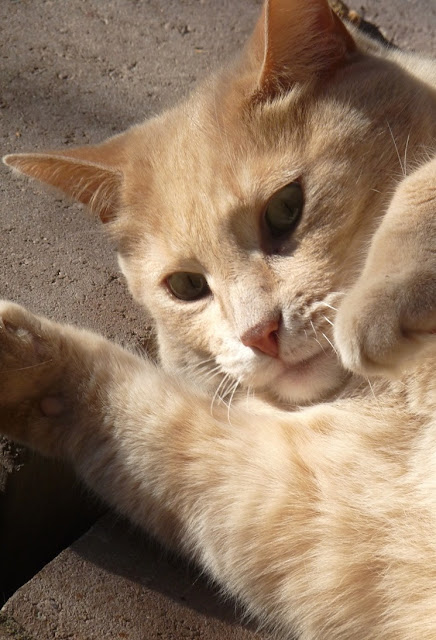 And when all is said and done, there's nothing like a good roll on the bricks, especially when Mom is watching your efurry move.  And yes, Dylan -- you ARE a good boy -- a bit of a scaredy-cat, but a good boy nonetheless.
Posted by CCL Wendy at Monday, October 18, 2010

That was fun Dylan - we like fall too - lots of new smells and leaves blowing around.

It's perfectly fine to be a mama's boy! And what a sweet little mama's boy Dylan is!

Dylan you are such a cutie pie - even when you look serious you are just adorable!

Dylan, I understand COMPLETELY. It's very Manly to keep one eye on your Mama at all times, I do it too!

~~Rupert, The Boy who Loves His Mommy BEST

Awww sweet Dylan! Smokey used to be the same way...had to leave a door open or he would FREAK out! Well, unless he was inside a room, and then that door better be OPEN. He has pretty much grown out of that now, and is a very mellow boy.

Dylan is such a handsome mancat! A little on the fraidy side, yes, but still handsome!

Rolling on concrete is one thing my cats miss about being outdoors and being in the basement! What is it about bricks and concrete? Dylan's creamy fur is a PURRfect contrast for an Autumn Day!

Dylan, you look stunning in these photos!

Moms are good for watching out for us kitties to make sure we are safe.

We're glad you got to enjoy some outdoor time, Dylan!!

Dylan, it is always smart to make sure your mom is nearby. Just in case!

Dylan...You are such a handsome mancat, and such a good boy to keep an eye on Mama ! My Gracie who looks just like you also looks like she is always on alert. The girl has issues but she had a very hard start in life. She is a Mama's girl, as a matter of fact Mama is the only person she likes !!