It's almost Hallowe'en, and although Domino didn't know it, mama bought her a costume -- a very pretty damsel dress, complete with damsel hat.

I caught Domino completely unaware first thing this morning, so she wasn't quite amenable to the idea, though normally she enjoys her modelling sessions.  And, of course, it's cold and rainy outside, so we did the photoshoot indoors, which never yields the best results.  Domino closes her beautiful green eyes against the flash. 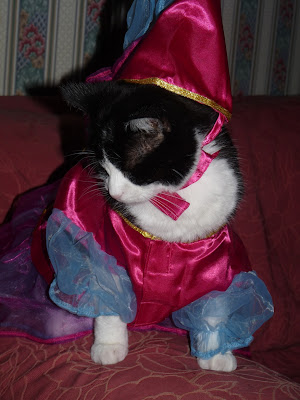 First, we tried the hat on without covering Domino's ears, but that didn't look quite right. 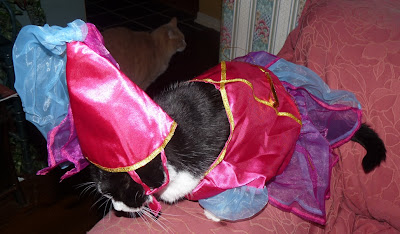 Then, we put the hat on over her ears, but that distressed her somewhat. "Suck it up, Domino!  It's just for a few pictures." 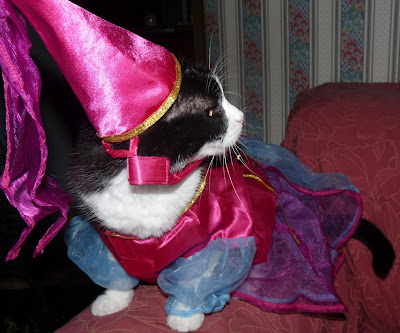 So Domino did.  Suck it up, that is -- and posed prettily with her stunning hat (which strangely resembles a dunce cap!).  But we all know that Domino's no dunce.  How could she rule with an iron paw otherwise? 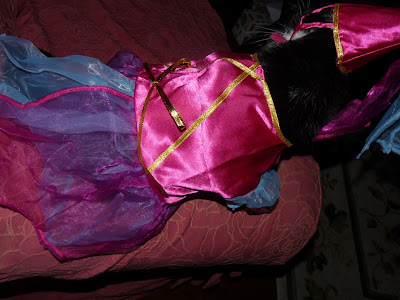 Here's a shot of the back of the dress.  You can see that the bodice is hot pink satin, criss-crossed with gold trim, and little blue puff sleeves, and the skirt is overlapping layers of purple, pink and blue.  It has quite a whimsical feel. 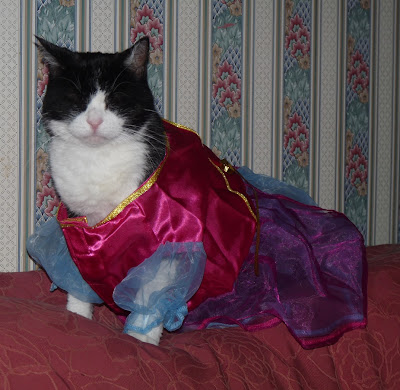 Unfortunately, the dress wasn't the best fit for her highness.  It was a little large.  On the pawsitive side, it didn't restrict her movements. 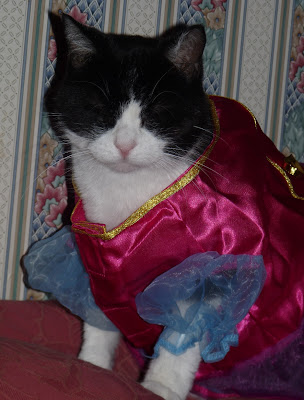 "I mai be a damsel in dis dress", says Domino, "but I'm still Queen an' efurrybuddy hasta doos wot I says." 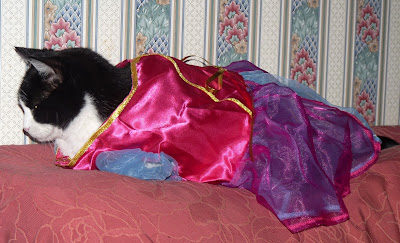 With that (and without her hat), her tiny mightiness lays down to rest.  It may have been a short modelling shoot -- but it was exhausting!
The moral of this story is that damsels in dresses don't need anyone else to save them, but themselves.  And that sometimes, off-the-rack isn't the best choice.
The End
Posted by CCL Wendy at Tuesday, October 26, 2010

Hi Domino, sorry you dress was a little big, but I thought you still looked lovely :-)

Domino, you are so good to your Mom! You are very pretty in your dress!

We especially like the sleeves of your damsel dress, Domino.
Happy Tuesday!
~ Miss Emily

Domino, we think there must be OSPCA regulations about humans dressing up their cats. :-P

But you do look lovely all the same!

You look so lovely in your dress! Better too big than too small!

We are going to hat you and Milo, and it will much less painful than this, we promise!!!!!!!!!

Domino that is a very cute dress on you even if it is a little bit big. And we totally understand about not wanting to wear the hat - we hate hats!

oh Domino, you looks lovely as a purrincess, but i can sees you was not in the mood to shoot today.

That was a pretty costume, Domino, but clearly not right for you - not only did you need something a little smaller, but it should have been a QUEEN outfit!

I can't believe that dress was off the racks...it looks couturier!

That is a very pretty dress for a lovely damsel Domino.

So pretty big or not. We would never sit still for putting anything on!

Domino gets an A+ for effort!

Domino U R a darling damsel! Were U in dis-dress... or was it dat-dress?

Domino, that is a very, very beautiful costume! My Halloween outfit came with a pointy hat, too, but it was too big for my little head.