TUXY TUESDAY: DOMINO WITH A TWIST!

Domino is in her favourite chair on the front porch -- again!  That's why it's her favourite -- because she's almost always in it.  I don't blame her for this selection of PURRch on the porch.  It matches her fur and her eyes quite nicely and it all makes for a very pretty picture.  It is also a marvelous vantagepoint for viewing the immediate neighbourhood.

Today, however, Domino is not a study in 'still life'.   She, too, has taken to doing her laundry outdoors, like her brother Dante before her.  However, unlike Dante, Domino is very delicate in washing her dainties.  She twists herself like a contortionist, but still maintains an air of dignity (unlike someone else who has been heretofore mentioned). 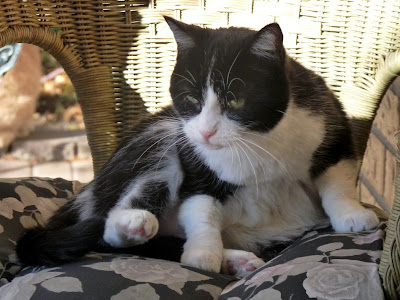 Domino's deciding where to start this PURRocess. 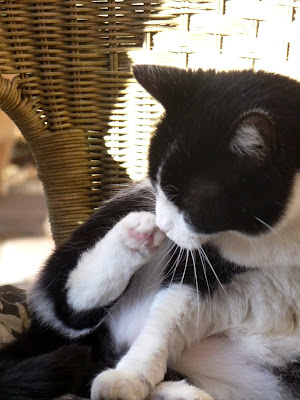 The toes don't smell bad at all, actually. 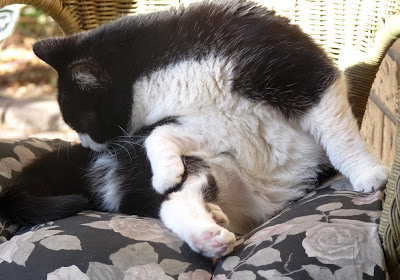 The butt, on the other paw, can use some immediate attention. 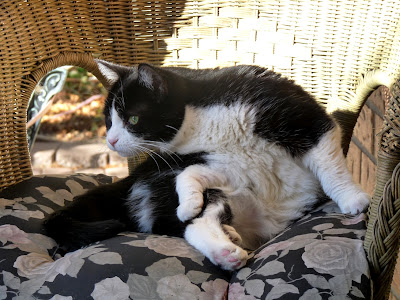 Nosy neighPURR that she is, Domino keeps a close eye on any activity close by.  She NOSE her PURRiorities, that's for sure! 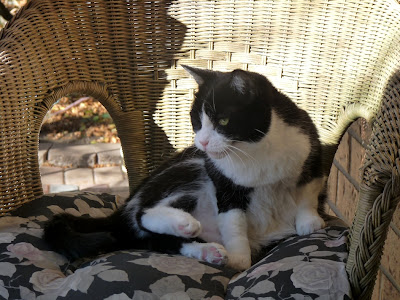 "I doan likes it wen mama sais I'm nosy.  I'm jus' a concern'd KITTizen is all." 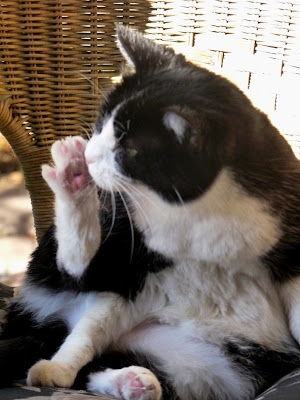 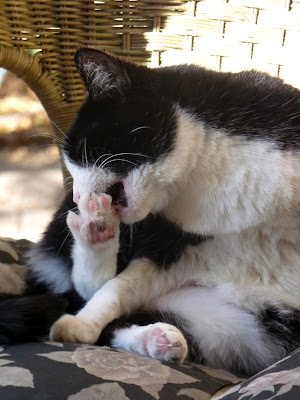 "Dere's nuffin like a bit of toe jam in da mornin'.  Dee-lishus!" 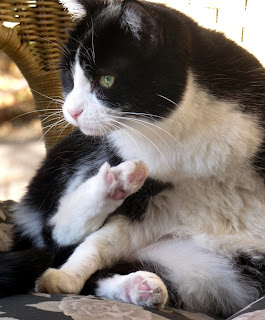 Domino keeps her eyes on the general vicinity while letting her toes air dry.  She's very good at multi-tasking. 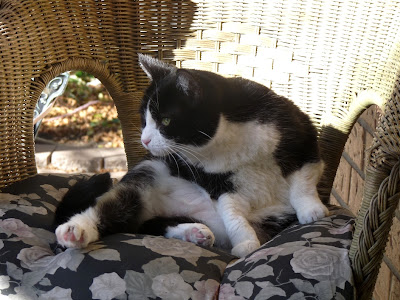 Ah!  Something else has caught her attention. 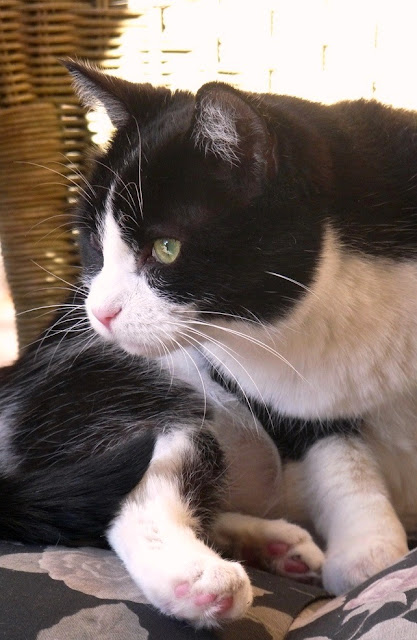 Something that requires much closer scrutiny. 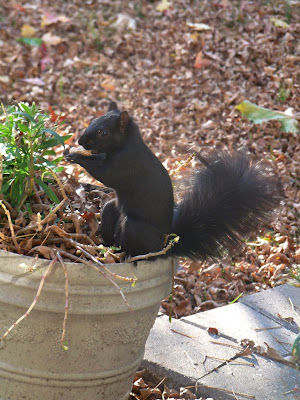 Oh, well, of course a squirrel is more interesting than bathing! But we think you did a terrific--and very lady-like--job on your grooming, Domino.

Domino you look so cute taking a bath - it must be fun to do outside! Plus we love that you are multitasking by keeping an eye on things and bathing at the same time! Very impressive!

A ladycat's job is never done, is it--even when trying to bathe!

Domino is so dainty and elegant. It must be so nice to be in your special chair every day, and to keep an eye on what's going on around you!!!
The little squirrel looks cute!!!
Purrrrs

It's good to have a clean toe when chasing after a squirrel...

What a vigilant kittie she is...good to have her as part of the neighbourhood watch!!!

I love the back toe-spread :-)

Bathing outdoors is the best! Mommy disagrees, but what does SHE know?

pee ess: Rupert admits it was he sporting the chicken hat. Grudgingly.

Such a busy, but beautiful girl!
~Lisa Co9T

You are a dainty bather Domino. When Eric bathes, he sounds like a pig grunting.

Domino
You are such a pretty petite little girl who is pawsitively clean from head to toe with complete dignity.

Those evil squirrels are always interrupting something!! Domino, you know how to keep your machine clean!

Oh no - a peeping squirrel is interrupting Domino's bath! Domino, you should give him a good whapping!

OH that Domino... She's the cutie patootie, sweet petite, Tuxy-lucksy, widdle girl! Sorry about that... Mommy's been into all that goofy baby talk lately!!! Love you Domino!