Today is Canadian Thanksgiving, so this is our turkey day, and I'll be busy in the kitchen and entertaining family instead of visiting my blogging friends.

However, I prepared this post to show everyone this marvelous birthday gift that I received from my friend, Crazy Cat Lady Carm.  She commissioned a portrait of my 3-D Cats from an artist named Susan Faye.   And here are Domino, Dylan and Dante preserved for PAWSterity! 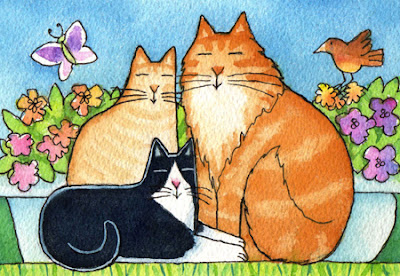 Note:  Susan Faye is also selling merchandise with this image, as well as many of her other original creations at:  http://www.cafepress.com/susanfaye/7305094
My three darling D’s are so-called because each of their names begins with a “D”, and they are larger than life – 3-D to the max! They are Domino, Dante and Dylan.

The first “D” to cross our doorstep was Domino, a little tuxedo ladycat with the feistiest personality I’d ever encountered. Domino had been abandoned by my son’s roommate, so rather than taking her to the shelter, I told my son to bring her to me. She was ridden with fleas and malnourished and at one year of age had already had a litter of her own. I took her to the vet as soon as possible, and she was ‘fixed’ from head to toe.

Next came Dante, who is a male red classic tabby Maine Coon. My beloved Tommy had just passed away and I wanted another red kitty, so this time I ordered one up from the Lacocoon Cattery in Lacolle, Quebec. Maine Coons are a very gentle breed, and Dante is no different. They are also very large, and Dante lived up to his genetics, reaching a maximum of 21 lbs. of solid muscle and flowing long fur.

Dylan came our way when my brother’s cat unexpectedly had five kittens. After four months, he hadn’t managed to find homes for any of them, so I took Dylan, who is a male cream tabby, and found a home for one of his sisters right next door. Dylan is very much the pesky little brother.

And the hierarchy in our home remains in the same order as their arrivals. Domino’s the boss! 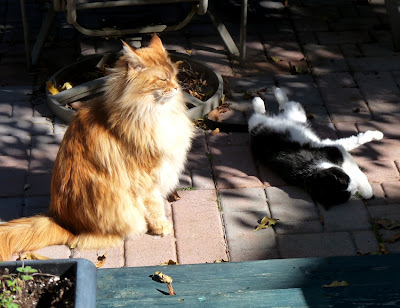 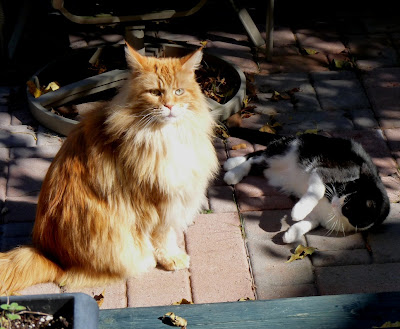 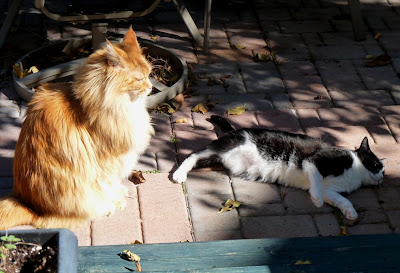 Happy Thanksgiving! I enjoyed reading how you aquired your furkids. Hubby brought home another one yesterday...we're up to 13 now!

Happy Thanksgiving! Love the portrait of the 3D's!!

Happy Thanksgiving to the Three D's!

We love the portrait of the 3D! It's awesome. Happy Tjanksgiving to yoo all.

Hi Dommy,
Do yoo want me over early for Thanksgiving? I can almost smell the Turkey from here! Smoochies.

Of course the female rules the roost....LOL.

That's a lovely portrait, such a wonderful gift.

Happy Turkey Day, furiends!! Oh my goodness, how amazing is Susan Faye! We LOVE her work!

Happy Thanksgiving! I love your portrait. Susan Faye's work is magical; my Mommeh adores her portrait with me.

Happy Thanksgiving! It looks like you all have a lot to be thankful for!

Happy Thanksgiving to the 3-Ds and Wendy and all the Canadian Blogosphere kittehs! We have our Columbus day here in the states... I was thrilled with the 3-D portrait and so happy that Wendy LOVED it! The 10's of 1000's of photos and works of art of our kitties do help them live on for as Wendy puts it PAWSterity! LONG LIVE the 3-Ds and all of our kitties!

I think your portrait of the beautiful 3D's is fantastic, I just love Susan's stuff! Coincidentally I also had a portrait made recently of my kitties which I'm hoping will arrive this week. I'll link to your blog too when I do my post about it (since you taught me how to do it - LOL!)if that is ok with you.

I enjoyed hearing how the kitties came to be with you!

Happy Turkey Day to the 3D--hope you get some! And of course a small female runs the house--not that we would know about that! How kind of your friend to have that portrait done!

Happy Thanksgiving...Love the beautiful, unique portrait of your gorgeous babies, just lovely...Enjoyed reading their stories and yes, long live the glorious 3-D's...We love you guys, hope you have a happy week...xoxo...Calle, Halle, Sukki

That is a lovely portrait of the 3D's. We enjoyed the story of their arrivals.

We love, love the portrait! What a special gift.