In my opinion, mancats are buttcentric.  They're always sniffing butts, or cleaning butts, or making someone else the butt of their jokes.  I mean, I have never, ever witnessed Domino even attempting to sniff tail.  It's certainly not her preferred greeting. 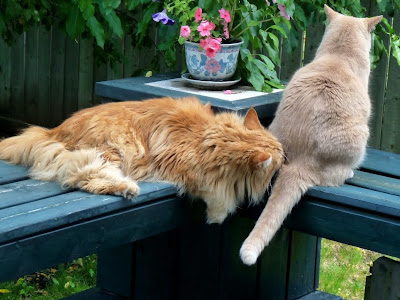 Dante, on the other paw, is a butt-sniffur extraordinaire!
Here he is doing his best to butter up Dylan. 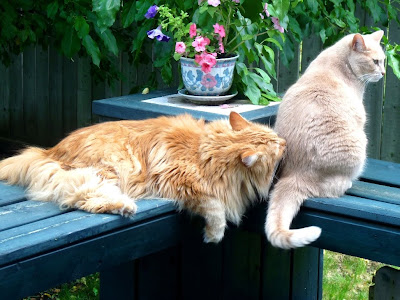 He has to get his nose right in there and inhale deeply. 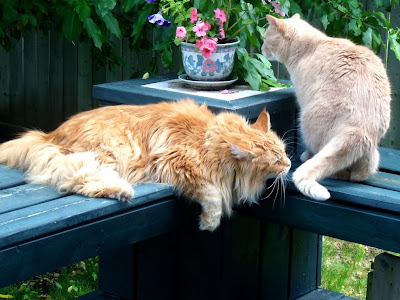 Butt, even when Dylan moves his butt outta there, Dante still purrsists in getting one last whiff. 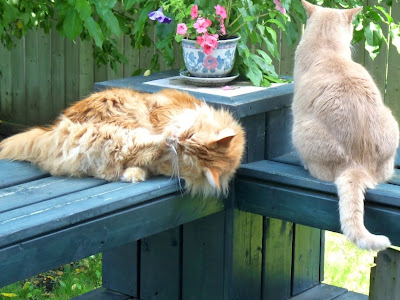 Only when access is completely denied, does Dante turn his attention elsewhere -- to himself! 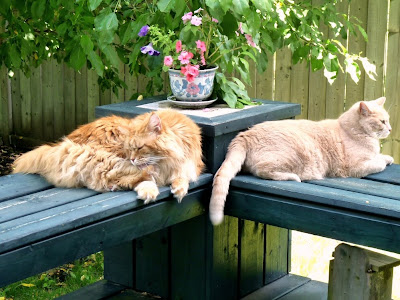 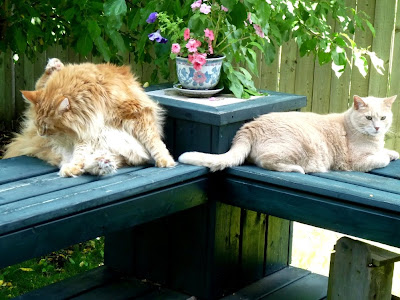 And, of course, it's not long before Dante turns his attention to his own butt.
Dylan, on the other cheek, seems somewhat disgusted by his brother's rebuttal. 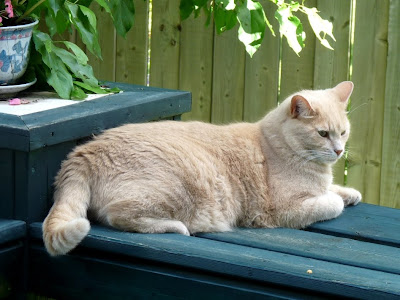 "Well, as long as he's not butting into my business, that's all that matters", says Dylan. 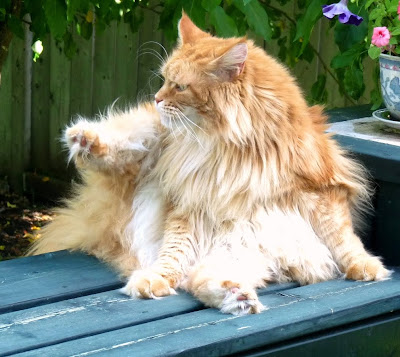 And here's one last FLASH of 'The Big Buttinski'.
Dante is such a purrvert. 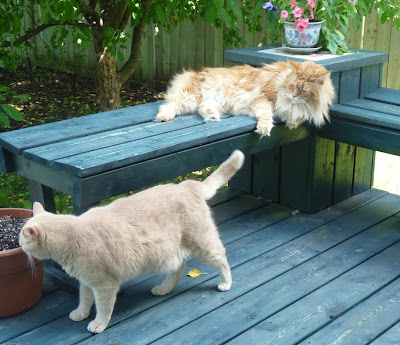 In the end (pun intended), Dylan leaves Dante all bummed out!
Is there a moral to this tail?  I think not.
Posted by CCL Wendy at Monday, June 07, 2010

MOL....We are all males here in the Nip Patch and we all do that ;)

P.S., Love the ceramic flower pot. We have one just like it.

We do get some butt sniffing at our house, though not an excessive amount! I think it is funny that Dante sniffs Dylan but Dylan doesn't head over to check out Dante - I would expect that a little bit - just you know, to see what is up!

we're all sniffers here - even the queen

THe boys in our house do the same, But Mom has caught Angle getting a sniff or too!

Furthermore, I think some cat's butts must smell even better than others...poor CC is forever getting a cold nose from his Brothers. It must be ambrosia!
MomKat Trish

The boys will sniff each other, but not to excess.

BTW, the pics of Nicki and Derry were taken on May 28th, so before Derry's dental. :-)

Both our felines are sniffers here. And Rosie is a girl! At least is not as intense as dogs!

We call that checking your ID... You smell like Dylan... You must be Dylan!

I know how you feel Dylan. Flynn is always sticking his nose up my butt.
Eric

Actually the Birman Girlz seem to sniff at Tamir's butt all the time!!

Butt sniffing goes on here too but we never talk about it in public.

Mawhawhaw! That is so funny. My brother thinks he could do that to me. Usually I end up paw slapping him!
Purrrr

Some cats are more butt-centric than others. Some, like my roommate Binga, only do the butt sniffing to annoy.

Jack sticks his cold snoot up Baby's butt if he wants her to move away from a food bowl. Very effective. She does not mess with his butt.

Oh Dante, who could deny you anything? (even if it is undignified, you still carry it off with flair!)

Connor does that to me all the time. Boys! ~Lizzie

With 4 of us here, everyone is always sniffing.

BUTT you know - you always have to find out where other BUTTS have been - BUTT you already know that, don't you☺