Usually Domino is very aware of the camera, and is ready with one of her modelling poses.  So, this is a rare shot of her captured unawares!  (No, I don't mean she was wearing 'unnawares' -- in fact, she's totally naked.) 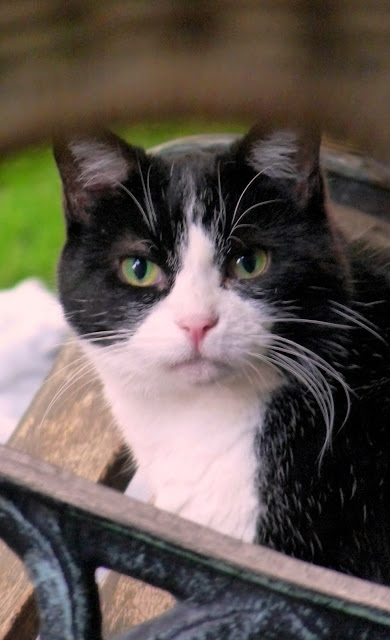 You can see that look of surprise on her pretty little face.  Totally candid!
According to Domino, though, who told me afterwards she really, really doesn't like surprises, this is a big 'candon't'.
So, for the next time, let's remember that song by dear old Britney Spears that went something like "Oops!  I did it again!"  Anyone can make the same mistake twice.
Posted by CCL Wendy at Tuesday, June 08, 2010

Surprise, Domino! You have such a cute little face.
Mandu

Even with a "candon't" she is very pretty!

Domino we understand about not liking surprises! But we do think you look very cute in this picture!

That is a lovely shot

MOL! Great picture of you Dominio

Domino is a beauty; I love the candid shot of her sweet face!...Happy Tuesday adorable girl...xo...Calle, Halle, Sukki

Domino dear, you are gorgeous!

sorreh you got surprised, Dommie-Dear, but this is a lovely pik-sher of you anyway. just look at those two-toned eyes!!!

Domino, you are beautiful even without prepping for the camera...we love that picture! We wonder what you were thinking just then...

I agree with everyone else: Domino always takes a beautiful photo.

That is a very pretty picture of you Domino.

She looks a little annoyed that you caught her unawares.

Oh, Domino, you are such a sweet little darling!

The mark of a true model is the ability to take BOOTIFUL photos without even trying!!

Cute and Cuddly Domino! That is a sweet tuxy face! Totally loveable!

I don't wear unnawares, either! They are very restricting.

I like the candid shot of your pretty face!