These are some rare indoor pictures of Dylan with a guest appearance by Dante. They were taken recently, the last time we were entertaining company.

Dylan is a "night owl" by habit, and usually howls at the top of his lungs to go outside once it's dark. He is a prowler by nature. However, ever since the snow and the colder weather has hit, he doesn't even make a whimper anymore. Dylan is very thankful for his nice warm home and the company of his brofur and his beans. He's not quite sure if he's thankful for Domino, though, because she's always so bossy.

Ah, there's nothing like relaxing in front of a nice warm fire! 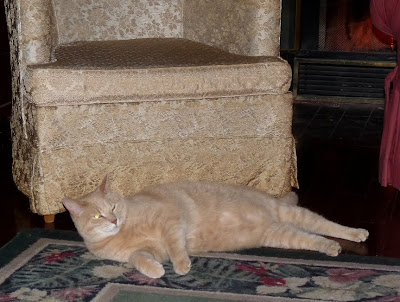 It kind of makes you sleepy! 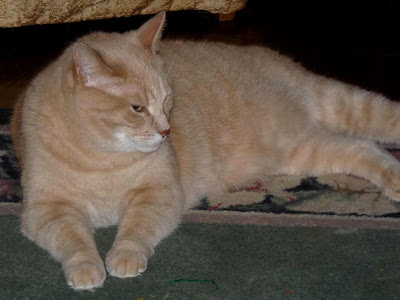 I took this picture without the flash, and although it's dim I much prefer it to one after it, that was taken with the flash. I've always preferred natural light (even when there isn't any)! 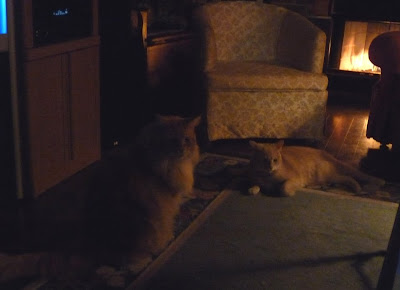 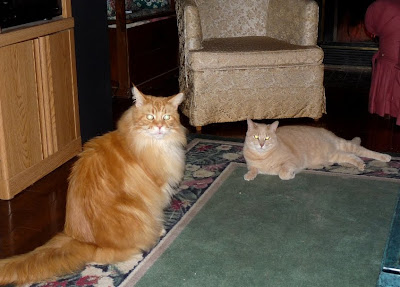 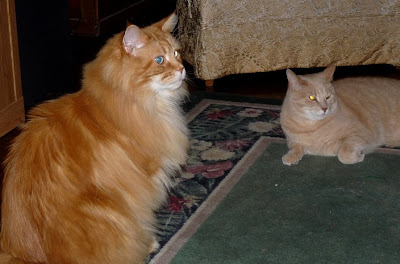 Dylan has many a tail to tell, that's for sure! 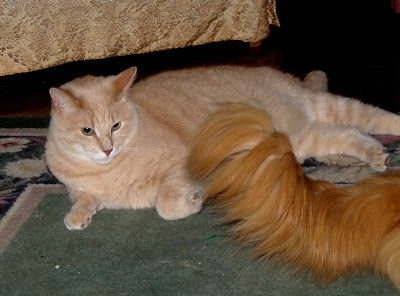 Here's Dylan with his Daddy! He likes to nuzzle Daddy's feet. 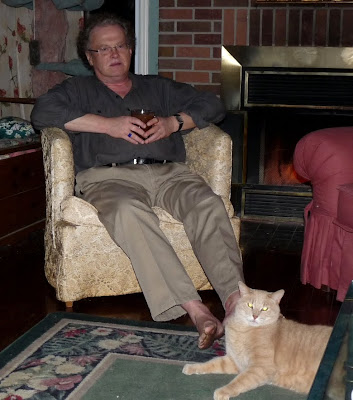 Sometimes I wonder if he has a bit of a foot fetish -- Dylan, that is -- not Daddy! 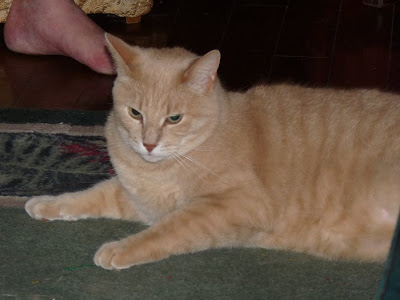 Here's another naturally lighted picture. I love the glow on Dylan's back from the fire. It has such a soft effect. 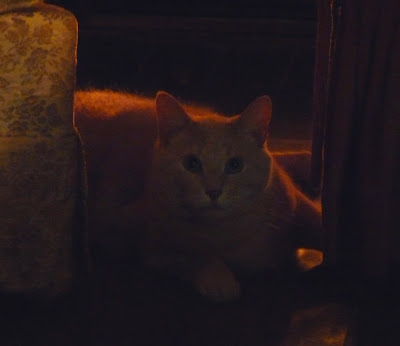 And here's with the flash -- the magic of the firelight is gone! 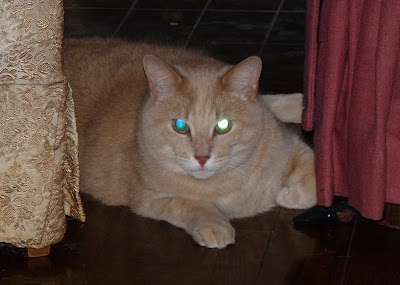 I am as thankful for Dylan as he is for us! He's been such a major addition to our lives. He's not a cuddly cat, but he is very affectionate in his own way. He loves to sleep on top of feet, and is a master of the head butt -- in fact he's a multiple head butter, meaning that he does it several times in a row -- not that he has multiple heads (LOL)!

Dylan is also very sociable with visitors, and will nuzzle their legs and feet, and plop on his side just beyond their reach -- so they have to get up to pet him. Dylan's no fool -- he knows how to work it!
Posted by CCL Wendy at Thursday, December 10, 2009

We like the natural lighted photos too. They look so much warmer then the ones washed out by the flash.

Ohh seein them inside is so strange! But I like it!

LOVE the fireplace pics without the flash. So warm and inviting. Dylan sure is a lucky kitty!

Hi, Dylan....we are very thankful today to meet you. We're looking forward to seeing a lot more of you. xxxxxx

Ah, cats basking by the fire! The very picture of contentment.

Dylan you are one big handsome boy. Jack is not into pets either, and will also headbutt. He loves to flirt with visitors though.

We don't wonder that Dylan wants to stay in now, with such a nice fire going. So he is a feet man? Our uncle Dushi (who is living with photoguys parents) is too. He likes to lie on peoples feet, doesn't matter who they are.

It's so cold here, that we don't blame you for wanting to stay in Dylan! You're very handsome by the firelight

He looks like the LORD of his castle! Nice warm houses are wonderful in the wintertime!

We like the natural light too. The flash loses so much of the atmosphere.

Dylan that is a lovely batch of pictures showing off your mancatly-ness!
The fire looks so comfy to lay by!