It's Mancat Monday and time to show you how the mancats of the house interact with the Christmas environment.

Dante likes to sit in the wing chair next to the Christmas tree and just enjoy all the ambience. 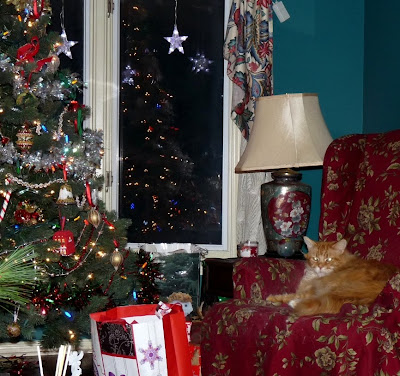 This is a better picture of the Christmas tree from top to bottom. We get reflections of it in the windows on either side of the tree, so it's almost like having three Christmas trees at once! 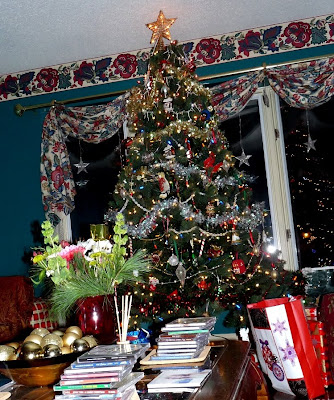 This is a picture of our dressed-up mantle from a rather odd angle (I was lying down at the time). 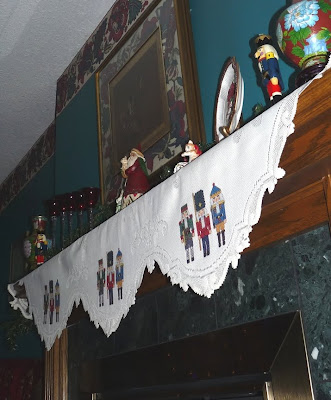 This is the centerpiece on the mantle -- our Santa with cat. It wouldn't be Christmas without him. 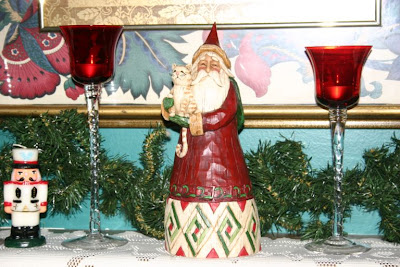 Here's Dante lounging atop one of the Christmas presents. It's nice and tall so also affords a view out the window! 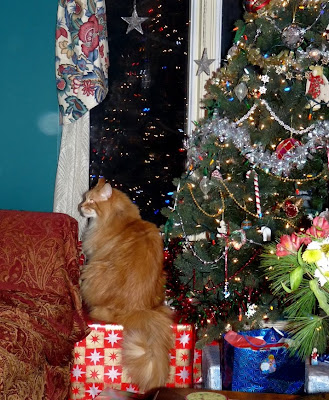 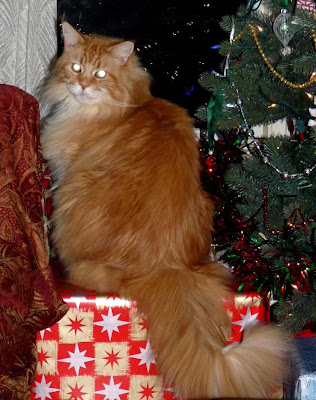 Dante also seems to favour this particular arm of the loveseat. This time he's not facing the wall at least. He likes to be around another favourite Santa of ours. He gets all excited just thinking about when the real one will be here. Only a few more nights now! 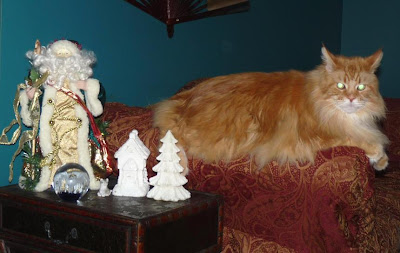 Dante in wide-eyed wonder! The anticipation is killing him. 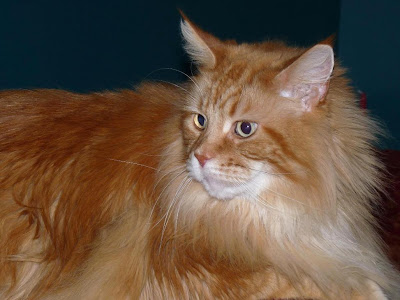 And here's Dylan, finally, sniffing around under the coffee table in the living room. 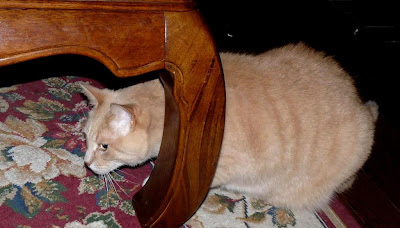 And checking things out from the foyer! Is that Santa at the front door? 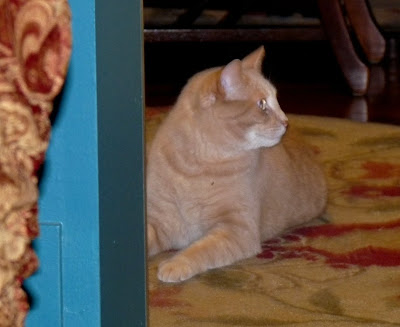 Dylan also likes to perch on that same present. It's a good location to scout out the tree and perhaps get a little nosh while you're at it. 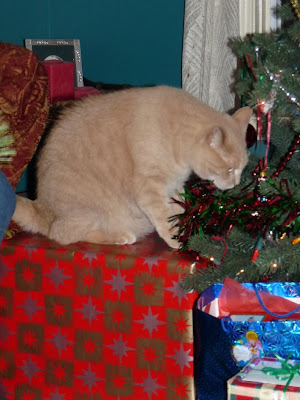 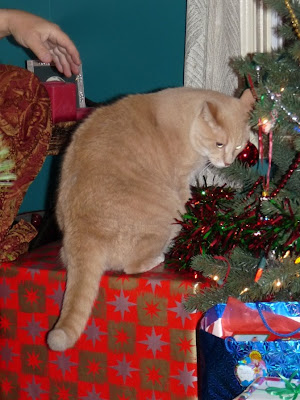 And then, a little expedition underneath the tree. Dylan's checking out which presents are for him! 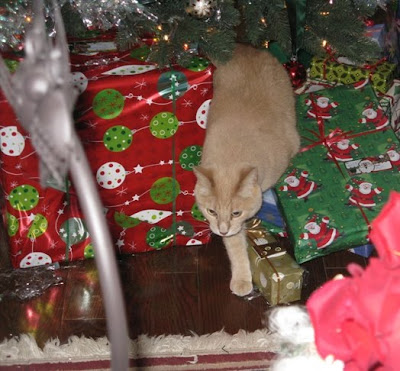 Mancats get just as excited as anyone else about Christmas! It kind of spoils their tough image -- but hey, some things are just more important.
Posted by CCL Wendy at Monday, December 21, 2009

Everybody gets excited when Santa Paws is coming!

It all looks so perfectly Christmassy. We love the Santa with cat. No wonder you all are so much in the holiday spirit.

It's looking very Christmasy at your house.....loved the pictures. xxxxxxxx

My Mom says Christmas doesn't ruin anyones image....its about fun and love! I see your cats are just full of it all!

The mantle is gorgeous--we love nutcrackers here! Don't worry about your "tough" image--even mancats have a soft side.

What a pretty Christmas set up you have Wendy! I hope that present they like is pretty durable with kitties jumping on and off it all day! They look so nice with all the pretty Christmas decorations around them!

Looks so festive at your place! You all are pretty good kitties!

It looks very Christmassy. We love the reflections of the tree. Merry Christmas.

Looks like you need to keep the big presents for the mancats!

Your home sure looks like Christmas and all those presents. I am sure there are many there for you. Just a few more nights to go. Merry Christmas.

They still look like tough mancats. Christmas is for everyone.

Dante and Dylan
You've got your house all ready for Santa Paws!
lookin grate!

We are excited about Christmas too. Your Christmas tree is pretty and we like the Santa with the kitty.

It looks great over there!

We love seeing you mancats checking out all the Christmas decorations! Our mom has the same Santa with kitty...it's one of her favorite Christmas things!!!

Your mancats look fabulous amongst all your beautiful Christmas decorations! They look like part of the whole design! Fabulous job! Looks like your entire household is really feeling the Christmas spirit!