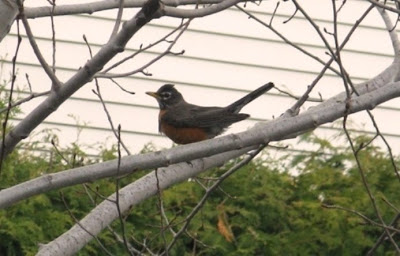 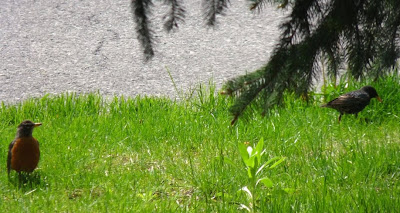 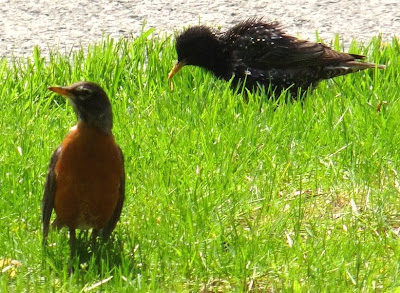 There I was searching high and low for Tweet pictures since Fin had declared this "Tweek Week". Of course, I came across hundreds of squirrel shots, but tweets are very hard to come by. The evil squirrels have been front and center this year.

Then, lo and behold, I found some of Robin and his wife Robyn from early last May! I had completely forgotten I had taken them, so it was a "Eureka" kind of moment.

You'll note that Robyn seems to be doing all the foraging, while Robin just stands around and struts his stuff. His big red breast, that is! I didn't know that robins could be so cocky, but this one certainly qualifies. However, perhaps that's just a male trait in general -- to be so egocentric.

Well, once the little egos (or is that eggos?) come along, Robin might even have to babysit (in a very literal way) from time to time, while mama Robyn brings home the bacon, or even more likely, the worms.

That actually might make one less worm to deal with in the nest, because I'm sure Robin will worm his way out of there at the earliest opportunity leaving Robyn to feed and bathe the kids before putting them to bed. A mama robin's work is never done!

P.S. I wonder what they'll name the kids? Here's a list of possible contenders: Robert, Roberta, Roberto, Robie, Robroy, Billyrob, Robbybill, Robocop, Robina, Robusta, Robuster, Robustest (for the one with the biggest breast in the bunch). Eggs always come in dozens and I've come up with at least a dozen names (aside from Robin, Jr., of course). Let's just hope Robyn didn't go for fertility treatments.
Posted by CCL Wendy at Friday, September 18, 2009

Great tweet week pic! Yes, lets hope she's not an Octo-Robyn! We're gonna vote on the name Robie because we have an uncle with that name.

Those are great photos!

Mum says that's just typical of the male to hang around while the female does all the work getting the food.

Robins are very sweet tweets! We are always FURRY excited when we see the FURst robin of springtime... Last week the robins and all their new baby robins had a party in our back yard! There must have been 50 of them! They have a red breast just like Dante!!!

We is thinkin' that you knows those boys whether they be Robins or 'beans.☺

Why do the wimmins always have to do all the work!?!

Typical male...letting the female do all the work!