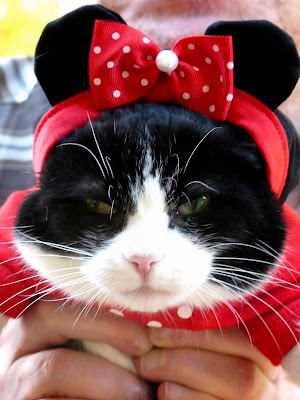 Milo, will you be my Mickey Mouse? 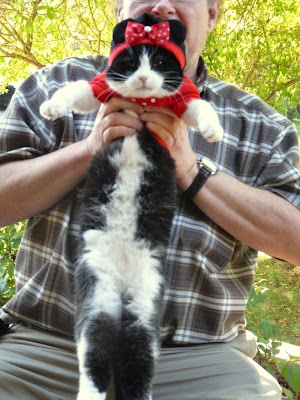 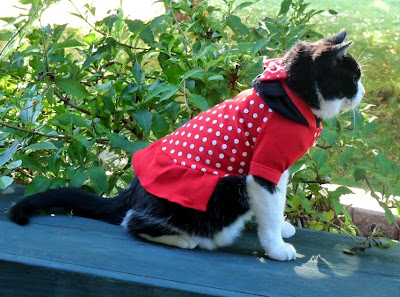 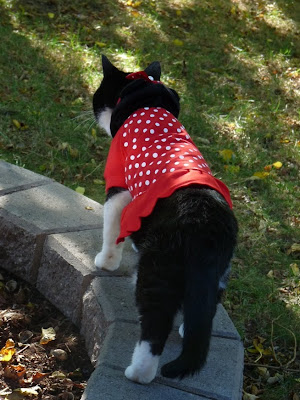 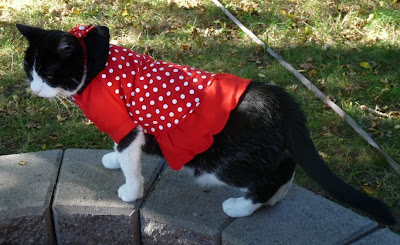 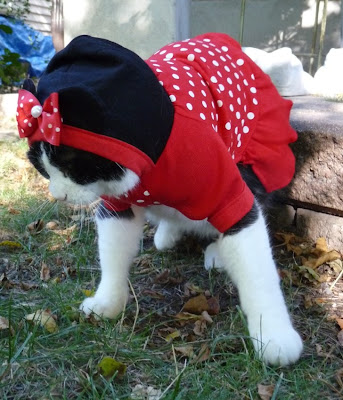 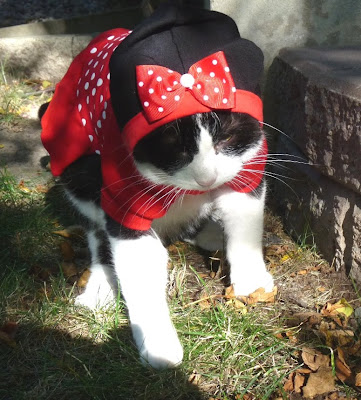 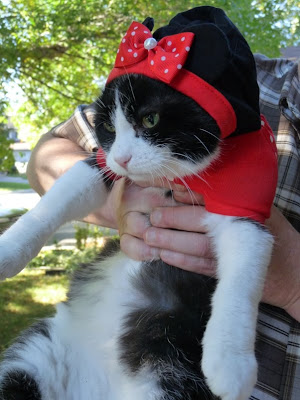 Yes, I've been at it again! See Domino as Minnie Mouse!!! Isn't she cute? I think she's a mistress of disguise (or at least of dis guy, Milo, who lives in England).

I'd really like to see Milo dressed up as Mickey Mouse, too, by the way. I mean he has his pirate outfit and his beachcomber outfit and his Musketeer outfit. Milo, did you know that Mickey Mouse has Mouseketeers? You and Do-Minnie-No could start your own club called the MouseCATears!

Anyway, Domino (er Minnie) was rather obliging, as long as you didn't make her wear the extra ears. She already has some of her own which are perfectly serviceable. For a reason not quite known, when you put the hood with the mouse ears on her head, she started to walk backwards. She performed her own mousie version of the Moonwalk. If we hadn't picked her up, she would have literally run into a brick wall (i.e., the house).

I can just envision Do-Minnie-No and Mickey-Lo doing the Moonwalk together at midnight under the full moon. (Perhaps we'll have to get Ann of Zoolatry to work on this one.)

Once relieved of the mouse-earred hood, Do-Minnie-No could move forwards once again. I guess this was an actual step forward for her. We relieved her of this new means of torture shortly after and she was greatly gratified. Fear not, though, Do-Minnie-No Mouse will return in future ePURRsodes, even perhaps with her boyfuriend, Mickey-Lo!

So back to the question posed in the title of this post. Is Do-Minnie-No more cat or mouse? This also begs the question, "will Mickey-Lo be a Mancat or a Mouse"? The answer to this question is monumental.

P.S. We have Part II of "Let's Bengal Over Backwards for Freya!" on the LOLSpot right now. Freya has inspired another dozen LOLs or so, so please check them out HERE.
Posted by CCL Wendy at Friday, September 25, 2009

She is a very cute Minnie Mouse

Yoo make the bested Minnie Mouse in the World ~ and the prettiest. I's be your Mickey Mouse ANYDAY!

Love and smoochies from Milo xx

Domino, you are such a cutie patootie in your Minnie costume!

Domino, red is your color! You make a purrty mousie!!

Domino doesn't look too impressed in that last picture. Maybe she wanted to be Daisy Duck instead?

A game of cat turned mouse!!! PURRedator turned PURRay! She's furry cute and it was fun seeing her on CWC this morning too!

We don't know how to give you an answer other than SHE IS ADORABLE! Our momma says that she would be kissin' her alla' da time when she was wearin' dat outfit! Move over Daisy...

You're an awfully sweet girl, Domino, to wear that costume for your beans! We don't think either one of us would put up with being dressed up like that.

It is a very cute outfit,though!

Have a nice weekend,

Domino, you start out not looking too thrilled but in that last picture, I think you are smiling a bit. Did you get used to the outfit - or are you thinking about Milo??

Domino! You are an adorable Minnie Mouse!