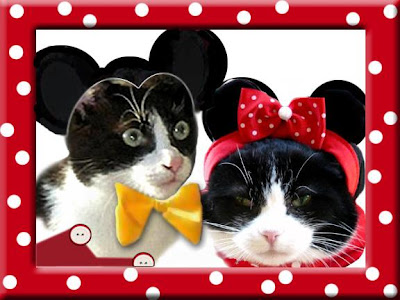 Last week, Domino asked Milo if he would be her Mickey Mouse, and Milo came back with a resounding "Yes"! So, with the help of Ann of Zoolatry, I am proud to present to you Milo as Mickey Mouse (Mi-MICKEY-lo) and Domino as Minnie Mouse (Do-MINNIE-no).

Since they already had their Mickey and Minnie Mouse outfits, they made some last minute plans for a Disney World date! It just seemed like the right thing to do at the moment. So, they bundled up on Milo's boogie-mat, and off they went to Florida. Compared to the trip overseas, it took no time at all! 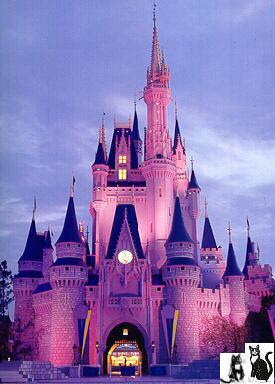 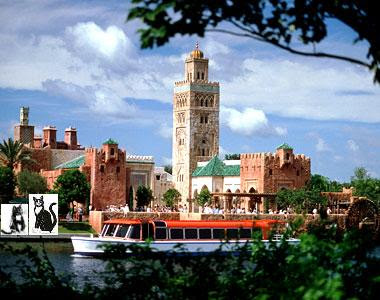 Milo and Domino are standing outside the Walt Disney World Resort where they stayed for the night. They took the boat ride down the river, too, to get a look at the entire Magic Kingdom. 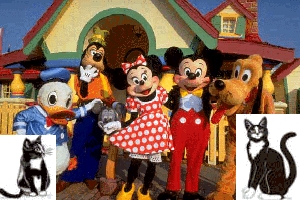 Dommy and Milo couldn't resist getting their picture taken with the real Minnie and Mickey Mouse! Of course, Pluto, Goofy and Donald Duck were there, too. 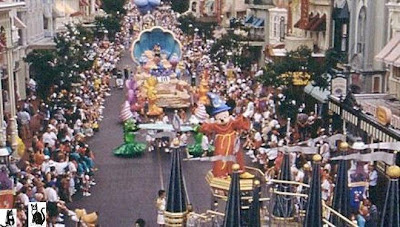 When it was time for the big parade down the main street of the Magic Kingdom, Milo and Domino just had to take time to stop and watch. Look, there's Mickey Mouse right in the middle!
There certainly was a big crowd. 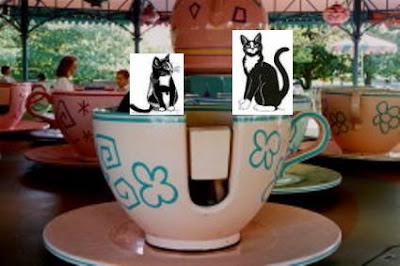 Domino really loved this ride. It was called "The Mad Hatter's Tea Party"! Milo thought it was rather tame. But he didn't mind humouring his lady love. 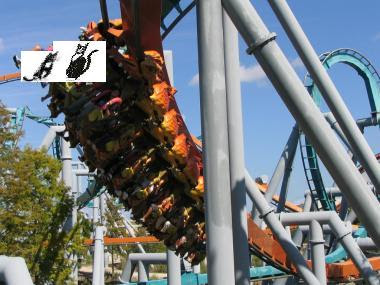 They went on one of the many rollycoasters in Disney World, but Dommy felt a little sick afterwards, so they didn't do it again! Milo thought it was a riot, though! He's such a daredevil. 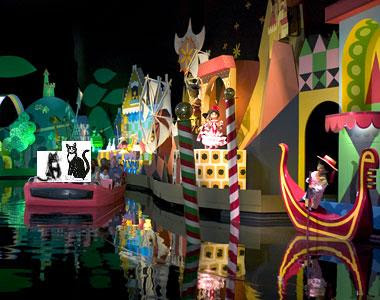 At "It's a Small World" in the Magic Kingdom, Dommy and Milo took the gondola ride! It was very romantic. 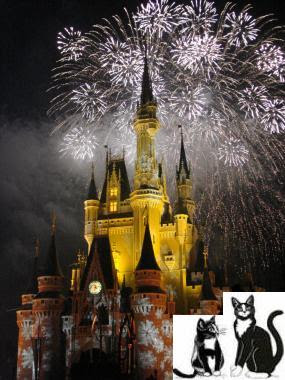 Domino and Milo returned to the Magic Kingdom castle to watch the fireworks and reflect on the day's events. Truth be told, they did a little smooching, too! 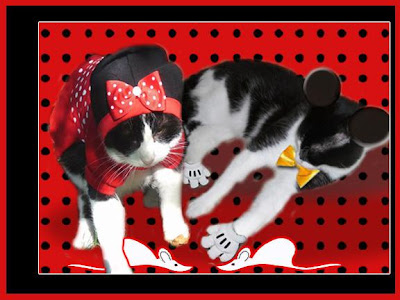 Before departing on their boogie-mat, Domino and Milo quickly changed back into their mousie outfits. Then Do-MINNIE-no and Mi-MICKEY-lo danced under the stars and did the Moonwalk together to celebrate their wondrous Disney World Date.

It's sure going to take a lot to top this one! Milo better put on his thinking cap, methinks. Or better yet, his mouse ears!

Note: Once again, thank you to Ann of Zoolatry for the photoshopped images. The crudely executed cut and paste jobs were done by me, as I am photoshop-challenged!

P.S. Please check out the LOLSpot for our new feature titled "Let's Give a Big LOL-Welcome to Missy, KC, Bear and Company!". Just click HERE to go there instantly.
Posted by CCL Wendy at Tuesday, September 29, 2009

what a fun date

I had such a good time Dommie ~ thanks! Being Mickey to your Minnie was great fun!

What a lovely romantic trip for you two!

OMG- Such a lovely game of cats and mice! I think I'm going to call Domino Minnie from now on... that would really be a cute nickname fur her! LOVED your adventure!!!

We bet you two had a marvelous time! Love your Do-MINNIE-no and Mi-MICKEY graphics!

Mom ♥s Disney World a lot! She had annual passes for years and years... but she never took us.

That looks like it was such a fun date! They are very cute together!!

It is always furry wonderful to have someone who looks like you and thinks like you to be your FURend! What a great adventure, too! You hit the jackpot!

Oh that would have been so much fun, although I'm afraid I might have barfed up my kibble on the teacups!

What could be more fun and romantic than a trip to Disneyland?!?

You two go on the most exciting dates!

You two looked good as Mickey and Minnie!

Wow! That was an exciting trip! And you two make the cutest Minnie and Mickey!!!

Ohhh, you two are so cute as Minnie and Mickey! We bet you had a great time at Disney World, it sure looks like it.