EASY ON SUNDAY: SOME 3-D SCHMOOZING!

It's Sunday, and two of the 3-Ds are feeling rather social. Dylan is missing in action again because he's got his days and nights reversed, and is sleeping somewhere in the house.

Dante starts off in the morning, by buzzing by Daddy (who is sitting on the deck bench) looking for a little affection. Dante and Daddy have a very special bond.

Then in the afternoon, our neighbour Barry, who lives at the end of our street, stopped by after his walk in the ravines which back on our property. There are paths in there and lots of folks go for walks in the woods which surround the ravine to get in touch with nature. We haven't seen Barry in quite some time.

So, Dante runs up to Barry to say hello, and then is just as quickly off to watch who else might be going by on the street. Domino has a longer visit and nuzzles Barry before showing him her backside. She stayed around, though, and schmoozed a while.

Barry was lamenting that Domino didn't come to visit him anymore. He lives at the end of the street that is closest to a busy intersection. In her earlier years, Domino used to rule Turnberry Road in its entirety, and visit all the neighbours along the way. She would stop by Barry's house and roll around on the ground showing him her tummy and mewing temptingly. She is a little temptress after all. She's hard to resist.

However, in recent years, Domino has confined her meanderings to the properties on either side of us and two directly across the street. I think other cats moved in and claimed the rest of the street. Her domain, though smaller, is still ruled by her tiny mightiness.

After Barry left and vacated the guest bench, Dante took it over to have a nap. When there are no guests to sit on it, the bench is known as the cat bench for obvious reasons. So folks, take Dante's example and relax a little. It's Sunday after all.

P.S. You might want to take a stop by the LOLSpot today, as we are featuring Moo and Baa in their last two home visits. Their post is titled "Feast Your Eyes on Moo and Baa ..." which, of course includes pictures of them with their host kitties. Just click on the LOL Icon, second from the top on the left to take you there. 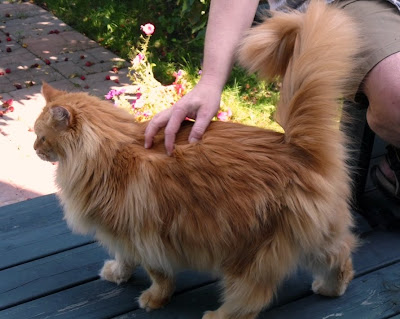 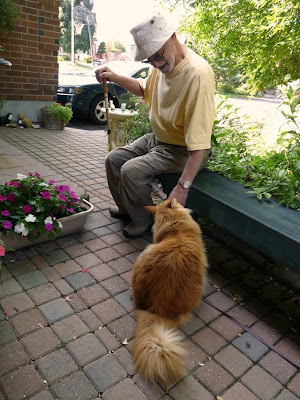 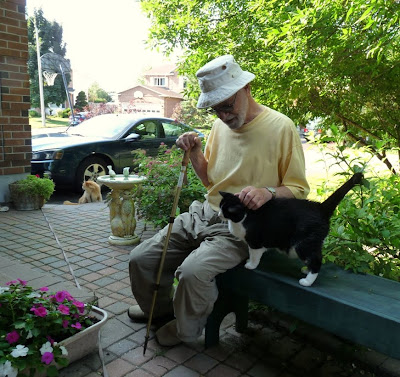 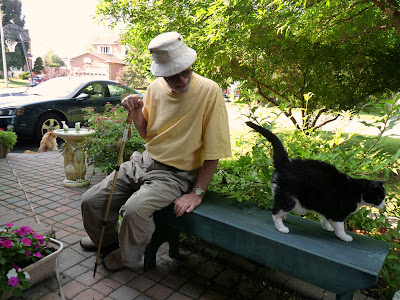 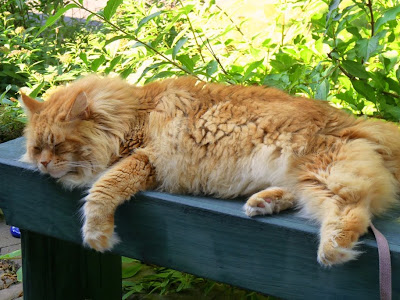 We love Domino's tiny mightiness! Dante Mom bets her hands would get lost in all the floofiness!

We're going to take Dante's advice and take it easy today too!

That's so nice that you are such neighborly kitties! I think it is important to share your kitty charms... in PURRson or on the WWW!

It's fun to have a visitor come by and give you scritches! Enjoy your Sunday!

I love seeing men with cats. Harley has a special bond with our dad, but I like my mom better.

We hope you are enjoying your Sunday!

You are such wonderful hosts. Who wouldn't love your company.

You kitties are so friendly to everyone! We get skeered of anyone that's not our Mommy and we run and hide.

What a great way to spend a Sunday, greeting your friends and neighbors!

Looks like you were all having a good Sunday.

Isn't it nice to have visitors?!

Great advice, Dante. I will definitely take it easy today.

You two are really pouring on the charm! That and your mom and dad's cooking must make your house a very busy one!

How nice to have someone come to visit the kitties! It looks like you had a good visit and enjoyed the scritches.