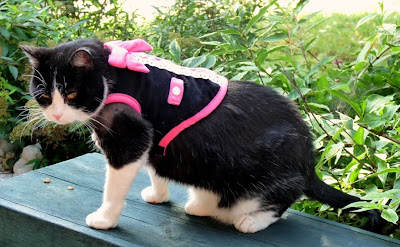 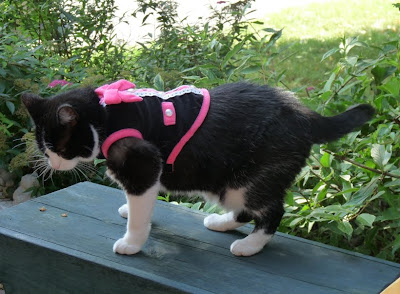 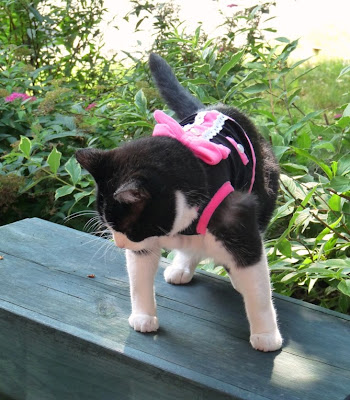 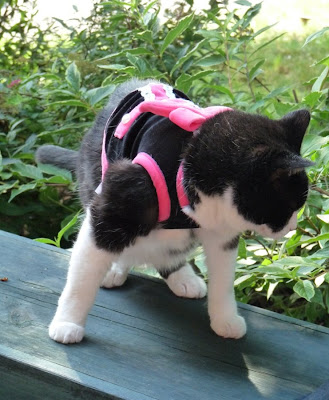 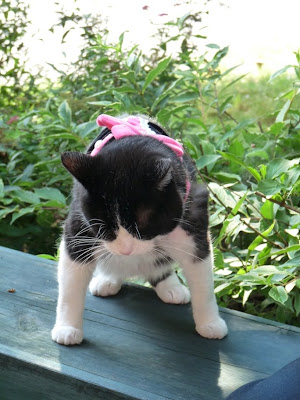 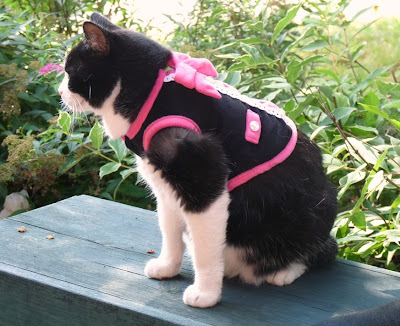 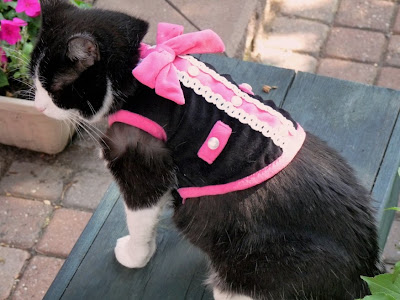 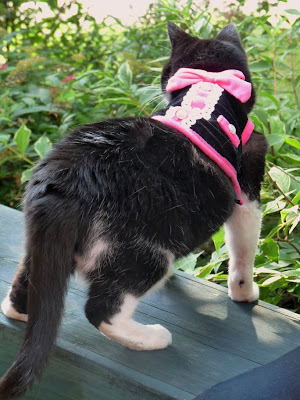 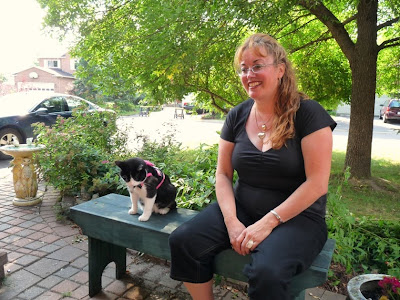 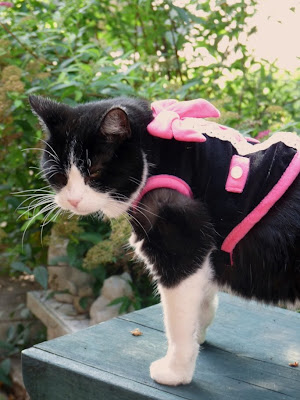 Mama had the great idea to buy some outfits for Domino in the hopes that she could become a top kitty model like Daisy, the Curly Cat and Reese. After all, Domino has shown remarkable modelling ability in the past, albeit strictly in the nude. So, mama went on eBay and found a cute little "dress" for not much money. She thought an XS (extra small) would fit because of the auction listing size chart, but then neglected to actually measure Domino.

So, this cute little "dress" arrived looking more like a vest than anything, and it really didn't fit as you can see by the pictures. Domino's arms barely made it through the armholes, and you can see that her fur is pulled back at the top of the hole because of the super snug fit. Mama couldn't do up the velcro closure underneath either, so it is just hanging open, for the most part. It did close at the neck, just barely, without constricting Domino's airway.

Anyway, Domino could hardly move once in her straightjacket. You can see her attempts to walk which end in awkward poses and not much movement! Poor little thing. The only problem was that she still looked so cute that mama had to keep taking pictures of this fashion disaster.

Mama's furiend, Susan is sitting with Domino on the bench. Doesn't Domino just look so tiny and forlorn? Don't worry, her torture is almost at an end. Domino makes sure I know she's not amewsed by giving me the "stink-eye" in the last photo. If efur there was a Fashion Faux Paw, this is it!

P.S. After we released Domino from her straightjacket, mama's furiend Susan, took the little outfit and is going to try to add some pieces to it to make it a little bigger and more kitty-friendly. We also tried to stretch the armholes as much as possible. Something tells me, it's just going to end up being recycled, though.

P.P.S. Domino hopes Milo doesn't laugh too much when he sees this! She's been humiliated enough already.
Posted by CCL Wendy at Friday, September 11, 2009

Oh Domino you are HAWT in that... LOOKS like a Kitteh- Boostier! Kitteh Corset! I'll bet Milo is very excited to see you in that get up!

Domino, you still look real beautiful! Sometimes my mommeh gets me outfits that are too small or, more often, too big. But you are doing a great job modeling the teeny-tiny dress! Pink is a good color for you!

I'll bet if you had the right sized outfit, you would be a modeling superstar!

Pink is an excellent color on you, Domino! Although we agree it might be a tiny bit tiny - even for such a tiny girl!

Awww, poor Domino...you still kept your cool, even in this uncomfortable situation!

Domino, you are a very good cat to let Mom put a dress on you! It is beautiful ans do are you.

Well, even though she does look uncomfortable, she does look awfuly cute in the outfit! If it was just a little bigger she would probably be a lot happier. It must be for kittens or something since Domino is not a huge cat by any means.

Nice outfit Domino - we know how you feel. We don't like to wear clothes and won't walk in them. Sometimes we just fall over and lay there even if it is just a scarf the beans made us wear!

Domino! You look fabulous! Mommy was impressed at how many pictures you were able to get. I am usually a one shot wonder. Good or bad, that's it. Sometimes my outfits fit a little....uh, snug. Guess I'm going to have to size up. It's all floof, I'm sure.

Poor Domino! How can you help it if the staff puurrchase the wrong size?

Domino, Mr. Forrest here, I think that you look furry PURRty and fancy in that outfit even if some of the 'beans have other things to say.

That is a pretty dress Domino, even though it is too small. We like the pretty pink bow.

PS: While Mom is in hosptal next week I'll boogie mat over EVERY day to see yoo (wivout dad noticing!

Stink eye indeed! This made my week! Thanks for sharing Domino. You looked adorable.
Deborah and Rusty

You still look quite pretty in your outfit, Domino! Perhaps we weren't looking closely enough because we were blinded by your beauty, but we never realized it wasn't the right fit - we thought it was supposed to be like that!

You are looking a bit scowly in your picture Domino, but you are sticking with your modeling assignment like a true professional! Good job!