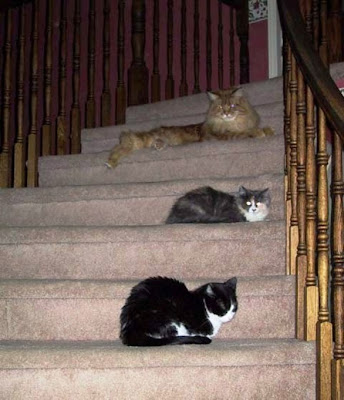 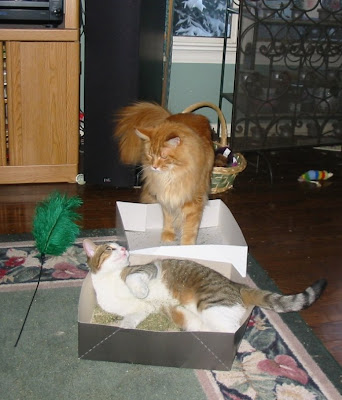 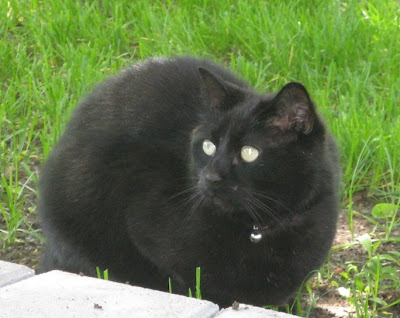 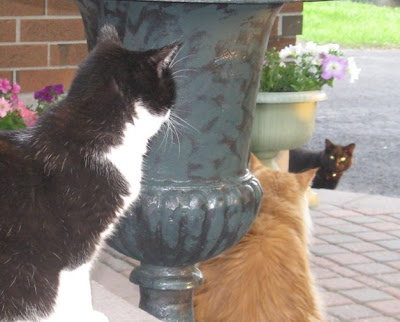 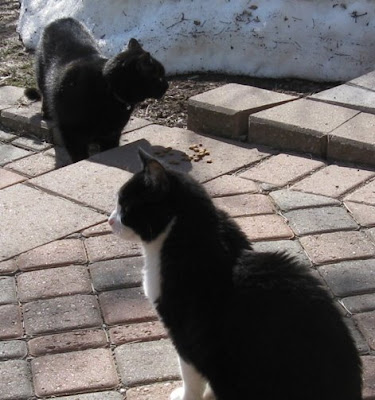 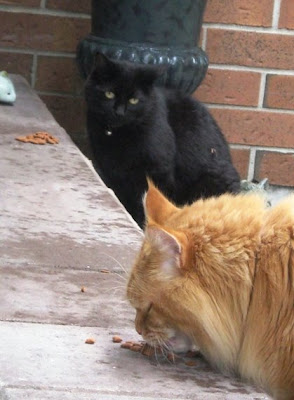 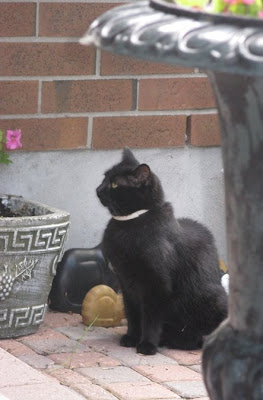 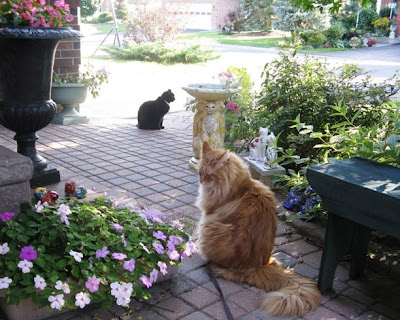 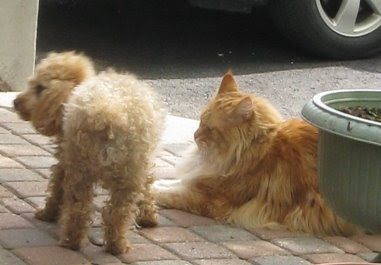 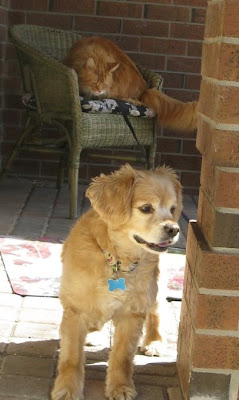 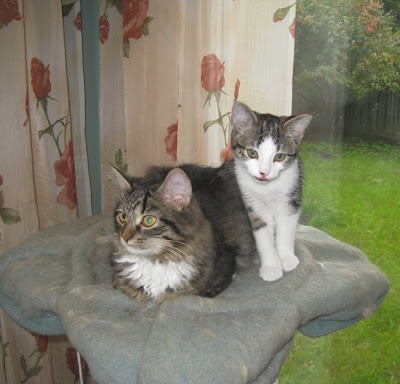 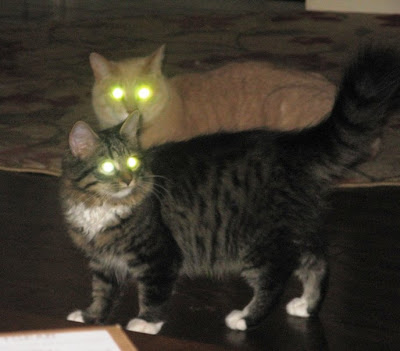 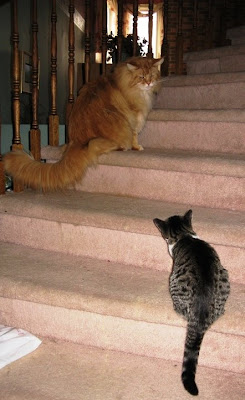 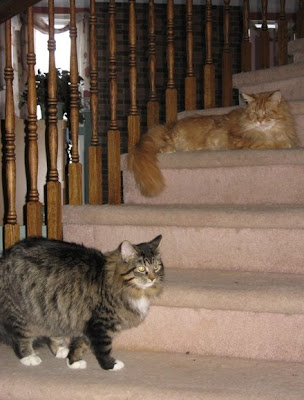 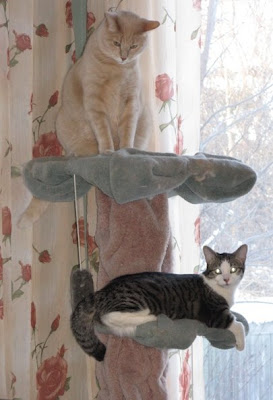 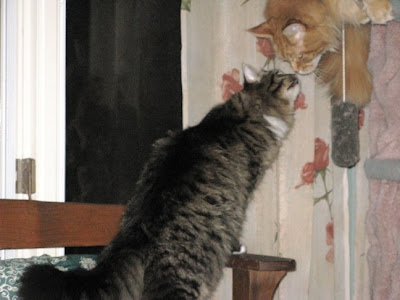 My three kitties have always been the most gracious hosts and welcome others of their own kind, and even the odd dog to visit them, both inside and out. They normally provide a furiety of tidbits to eat, ranging from a selection of cat treats to Fancy Feast to real tuna, and of course, nuggets of cheese for those purrpetually famished doggies.

The furst picture of three cats on the stairs shows Dante and Domino with one of their earliest kitty-guests. The little patched girl in the middle is my brother's cat, Dusty, who later became the mother of five kittens. Dylan was her furst-born, who of course, joined our household on a purrmanent basis!

The next picture shows Dante and my son's kitty, Boomer, celebrating their mutual birthday togefur (January 15th). When this picture was taken, Dante was celebrating his second year, and Boomer was just one year old. (For Boomer's fate, you will have to read "The Touching Tail of Dante and Boomer" on my "All About Lacocoon Dante" Blogspot.)

The pure black kitty which follows is our neighbour's cat, Figaro, who is the 3-Ds most furequent visitor. Of course, he just lives kittycorner (pun intended!) across the street. You can see him chowing down on more than one occasion, and he has even been known to come calling at our back door at night in his quest for treats! If he sees me on the front porch, Figaro will come running and if I have nothing to feed him, he will wait patiently until I fetch something. Gee, it sounds like he has ME trained!

Next we have our doggie furiends. The miniature poodle is Riley who is another neighbour from across the street. Riley and Dante have actually been known to play togefur -- a little bit of chase on the front lawn, but in this game cat chases dog! Dante also likes to nuzzle Riley whenefur he gets the chance.

The little cocker spaniel mix is Bentley, who has inadvertently been spoiled by us and actually purrfurs our home to his own. That's because he gets plenty of treats -- usually cheese, and he's allowed to roam freely in the house and out. Dante is the one who tends to trail him around, too. Dante has an affinity for small dogs. Maybe, it's because he's larger than they are, and feels no threat at all, although he really doesn't like it when they start to bark. It hurts his delicate (and furry sensitive) ears!

Next we come to Sox and Missy! They are my grandcats, and kittens of my only son, Ryan. He adopted them late last summer, and they are now coming up on their furst birthday, sometime in June. Sox is the little, fluffy kitty boy, and Missy is the little short-haired tabby girl.

You can see the congenial atmosphere between my cats and my grandcats. There does seem to be some discussion over who is top cat when they are here, howefur. Missy is quite the dominant little thing. She has tried to overthrow both Dante and Dylan at diffurent times. However, Domino is our own little alpha kitty and still rules the roost, guest or no.

Sox and Missy love to come to visit because we put out a virtual kitty buffet, and they can nosh and schmooze to their little hearts' content.

It's wonderful that my kitties have a social life, which is more extensive during the warmer months, but is very rich and rewarding at any time of year. They are the darlings of kitty society, and efurryone is jonesing fur an invitation!
Posted by CCL Wendy at Saturday, April 25, 2009

You have taught them well CCL Wendy to be gracious hosts as you are one yourself... both in your actual home and on your Blogspot... Thanks for inviting us all into your little corner of your kittyworld!!!

What a lovely collection of pictures! They are all so handsome!
We have a black kitty visitor that comes to our house, but he is a homeless cat and our mom feeds him.

Such sweet Kitties to welcome so many friends. Great pictures!

Your kitties are very cool, and unique. We prefer guests that stay on the other side of the window and door,they just make us nervous when they try to come in. Thanks for coming to see us today.

Awwwww how sweet to have so many furry friends.

Thanks for letting us meet your furiends! As the song sez...you gotta have furiends!