Domino loves to do hostess duty at our dinner parties.  This weekend was a big one because it was a Triple Birthday Bash for my friends Renate and Val, and my brother, Barry. 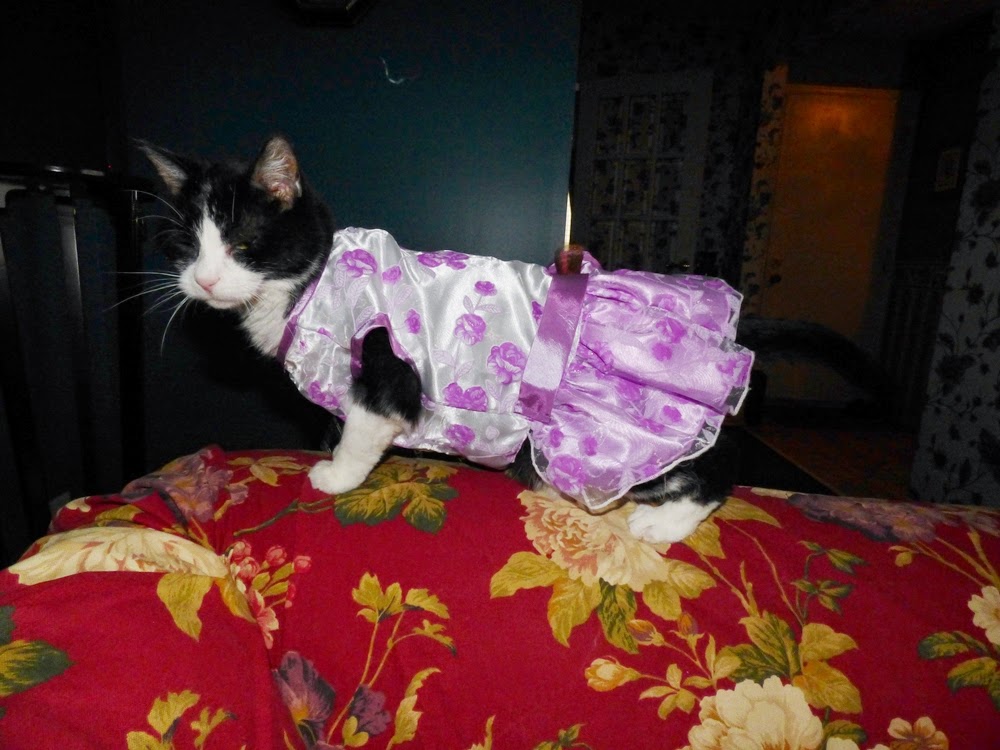 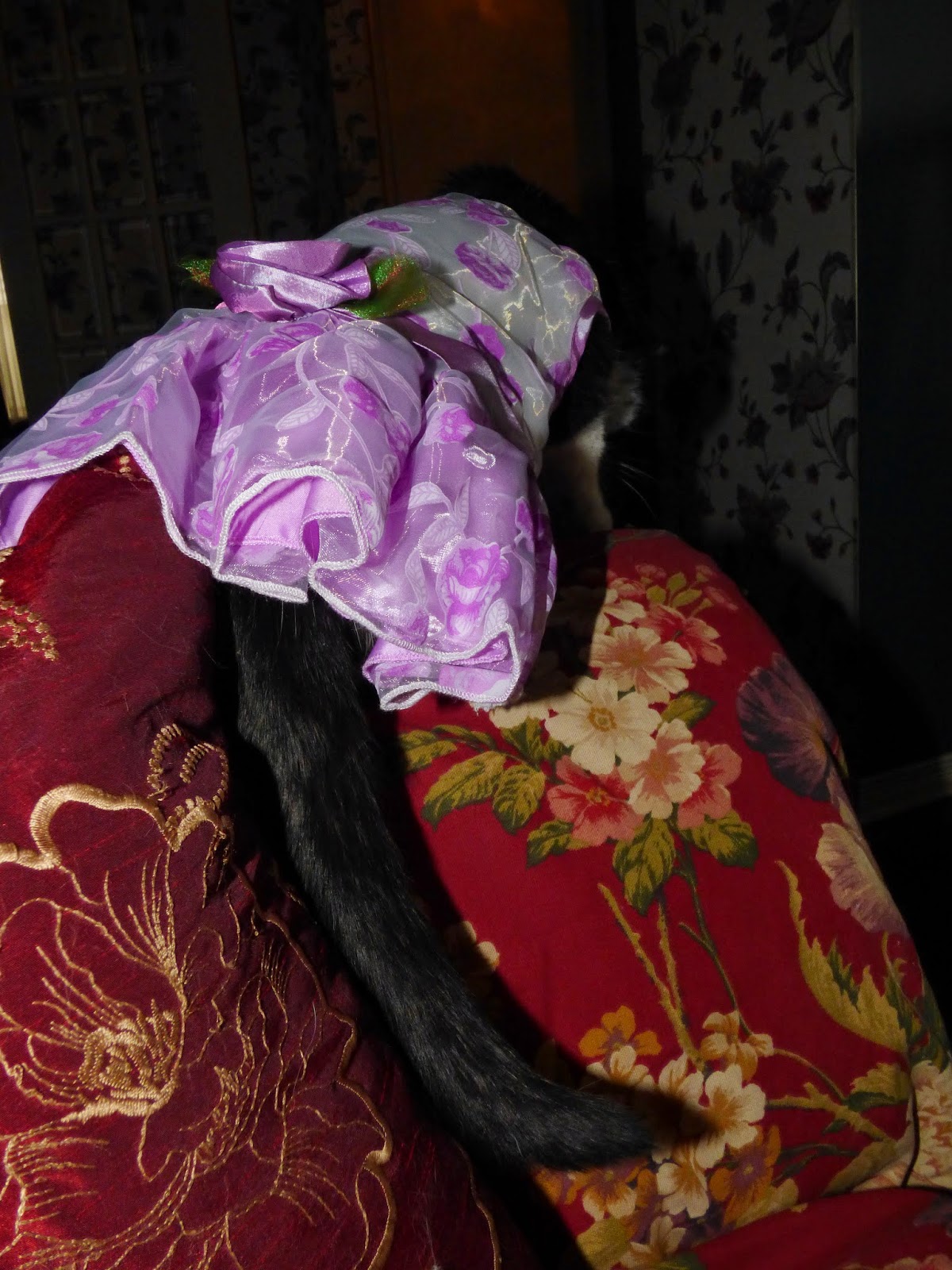 Domino has turned towards the front entrance.  She's actually at the ready to meet and greet now.
Here you can see the pretty purple rose at the waist of her dress. 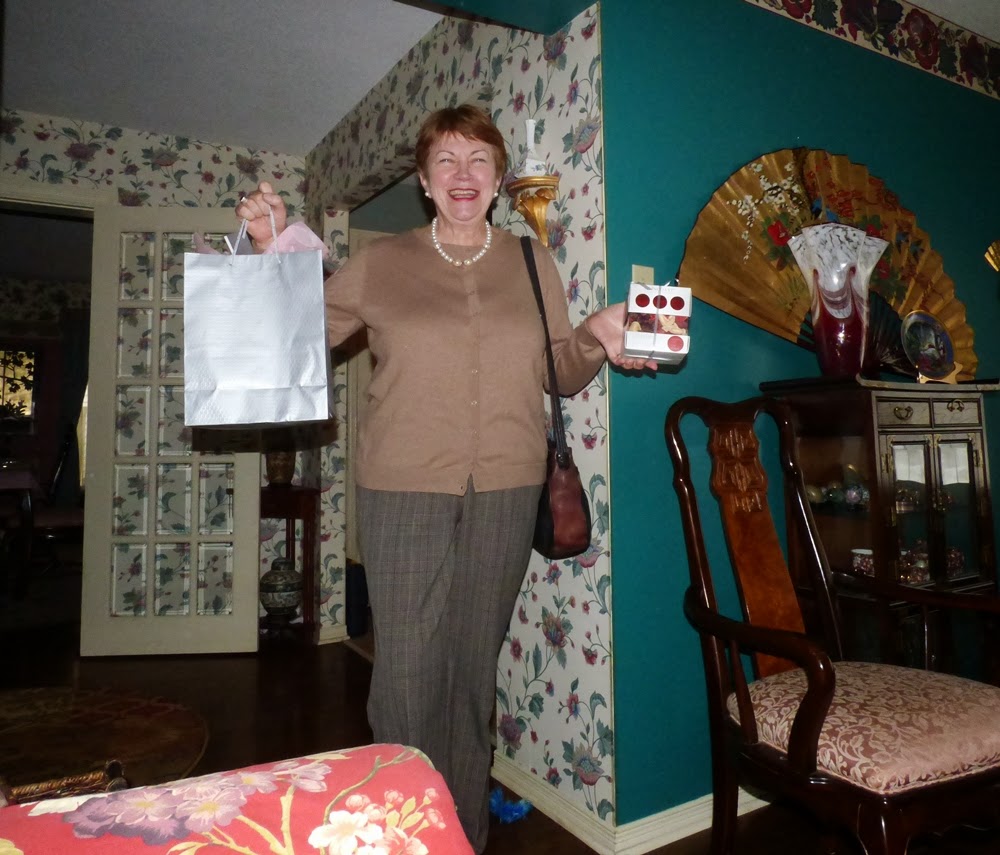 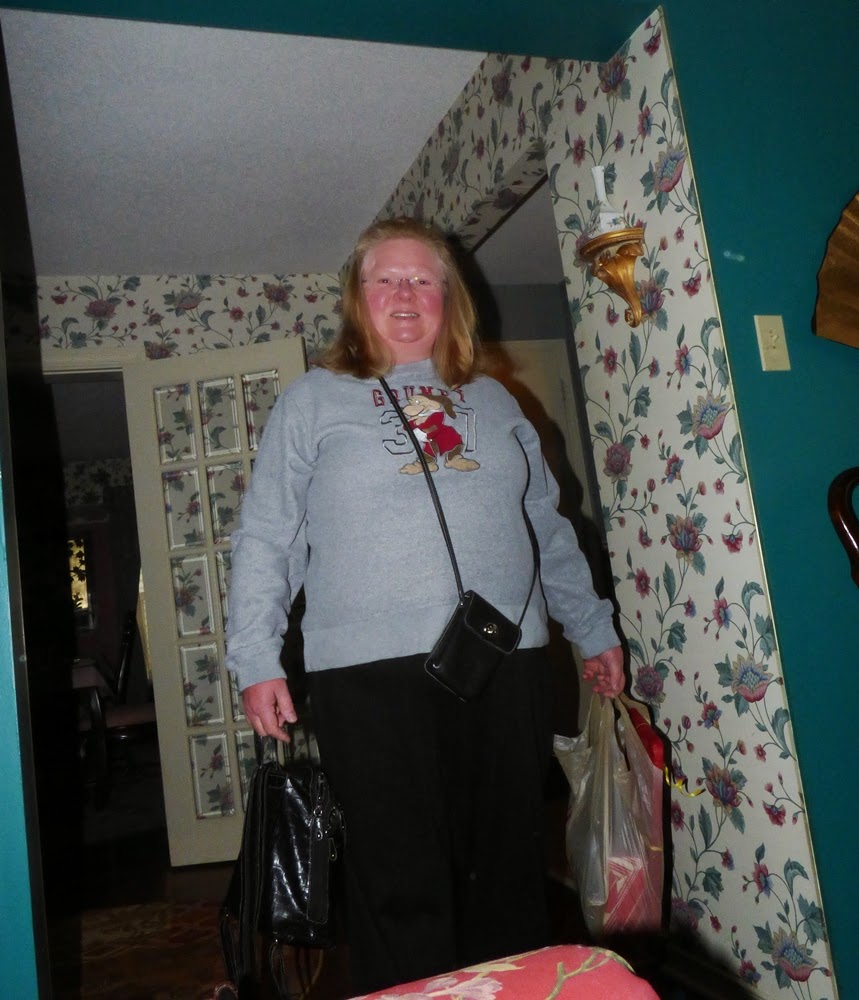 Then along comes Birthday Girl Val who is just beaming with delight.  She seems to have her hands full as well. 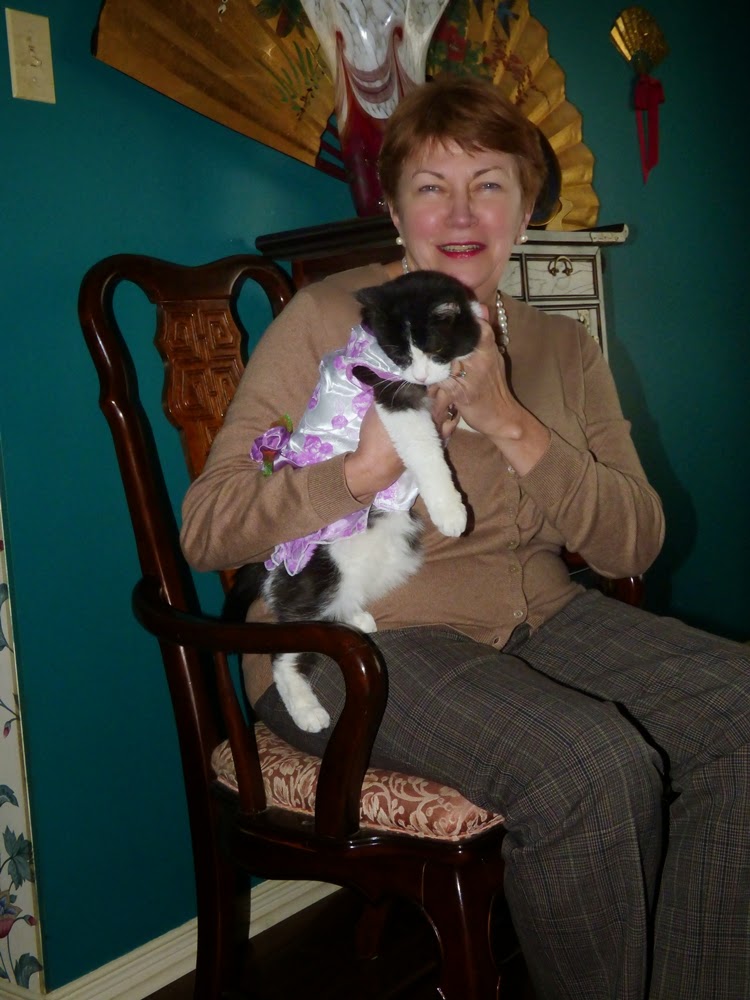 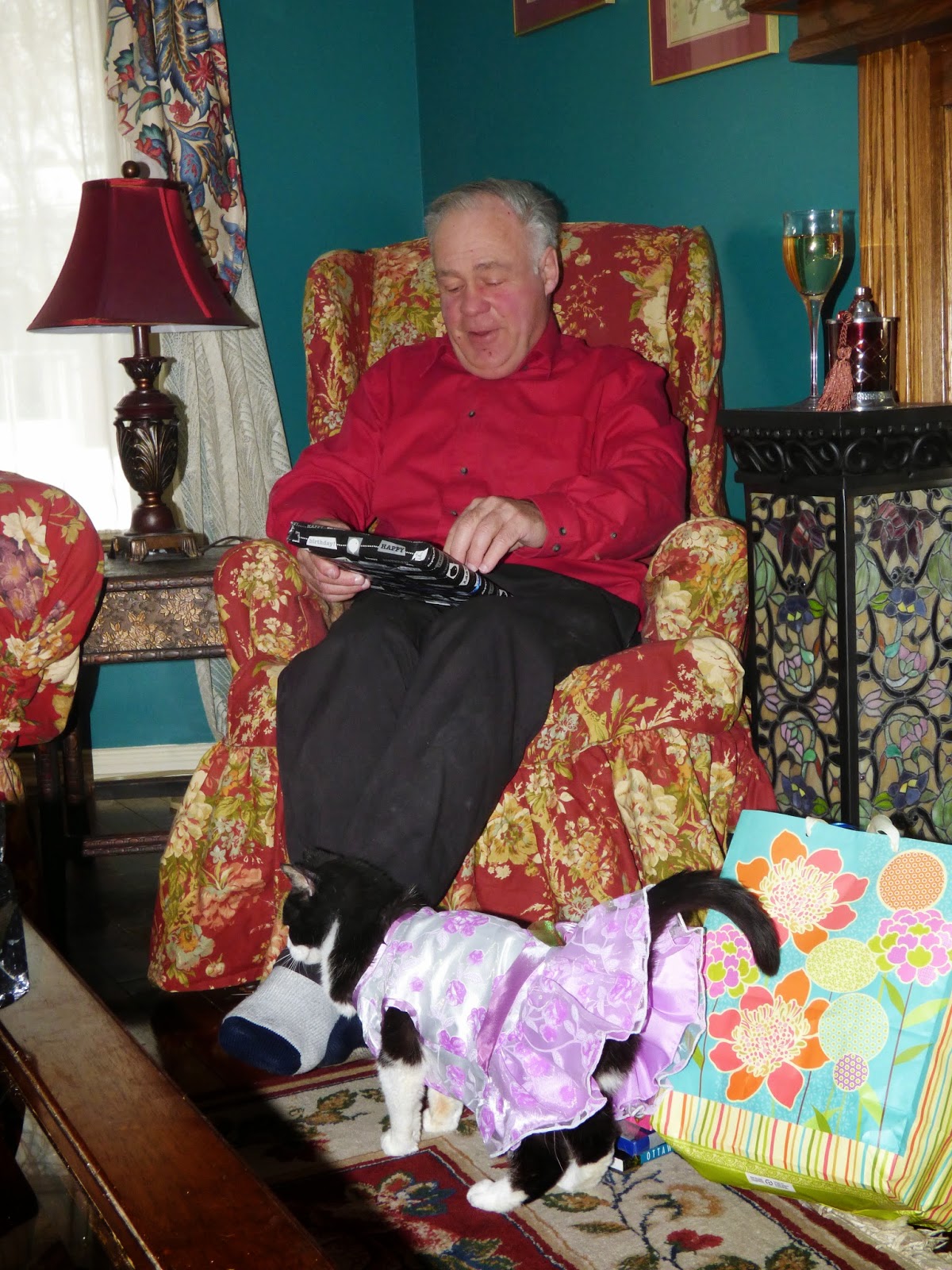 ... Domino is even more fascinated by Birthday Boy Barry!  She especially likes his socks.  They were good for a whiff or two -- and a nuzzle. 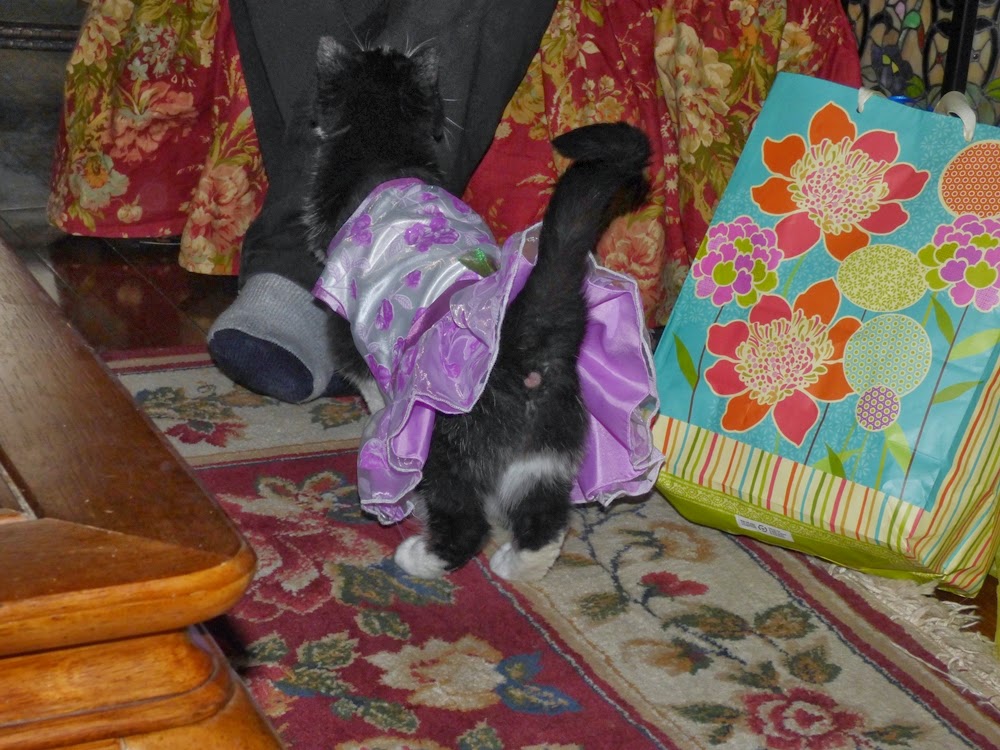 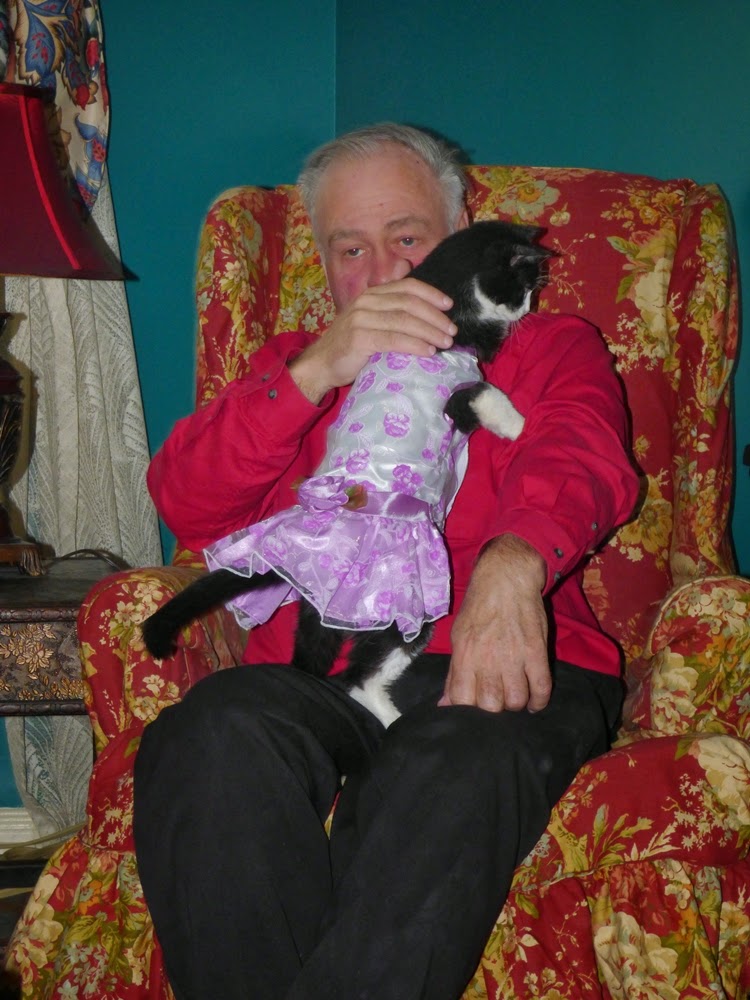 This is where Domino can really get to work loving up the company.  She even did a little lap dance ... 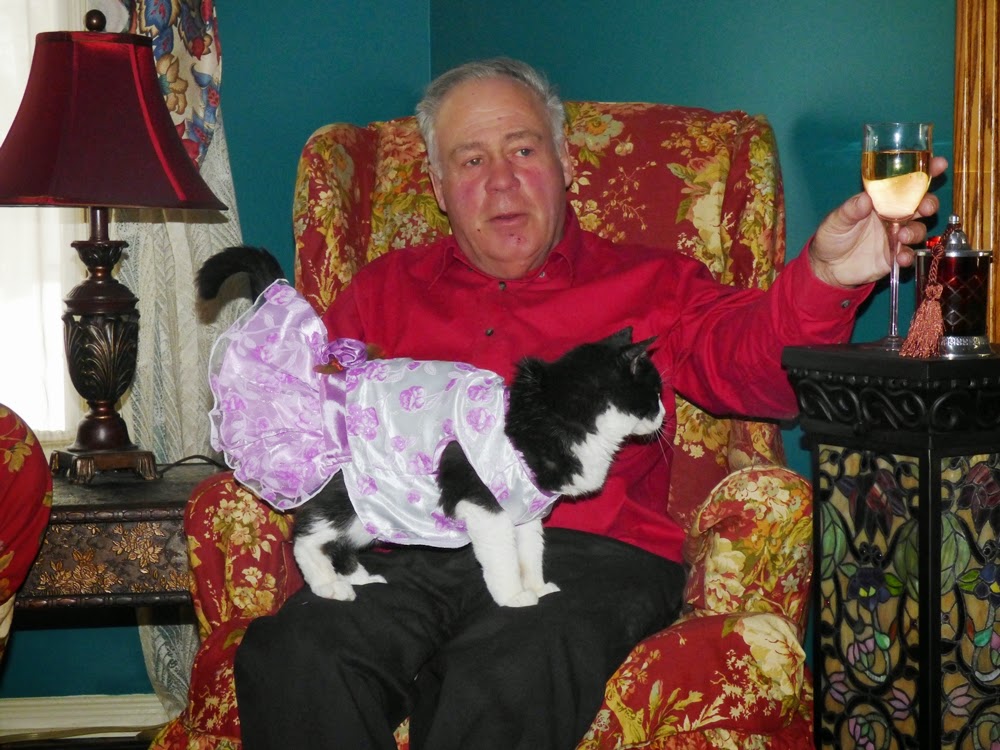 ... before settling down to business! 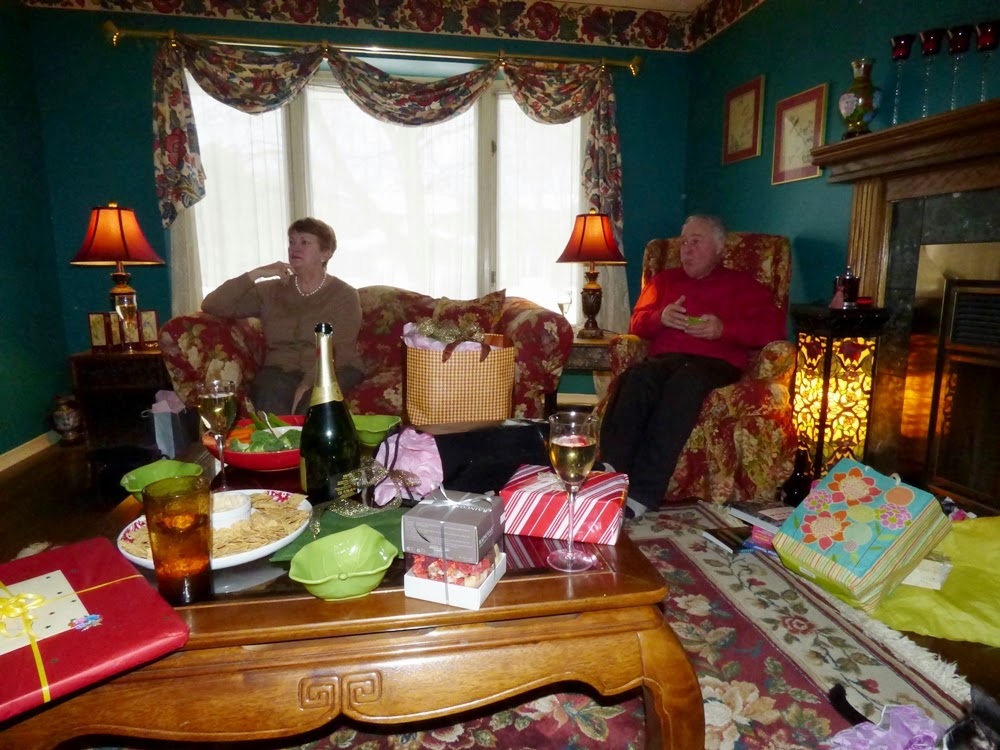 There were birthday gifts galore and some healthy appetizers -- veggies with my homemade dip and some whole wheat cracker chips.  Domino thinks she should be the only apPETizer, but I think the guests appreciated something to actually munch on. 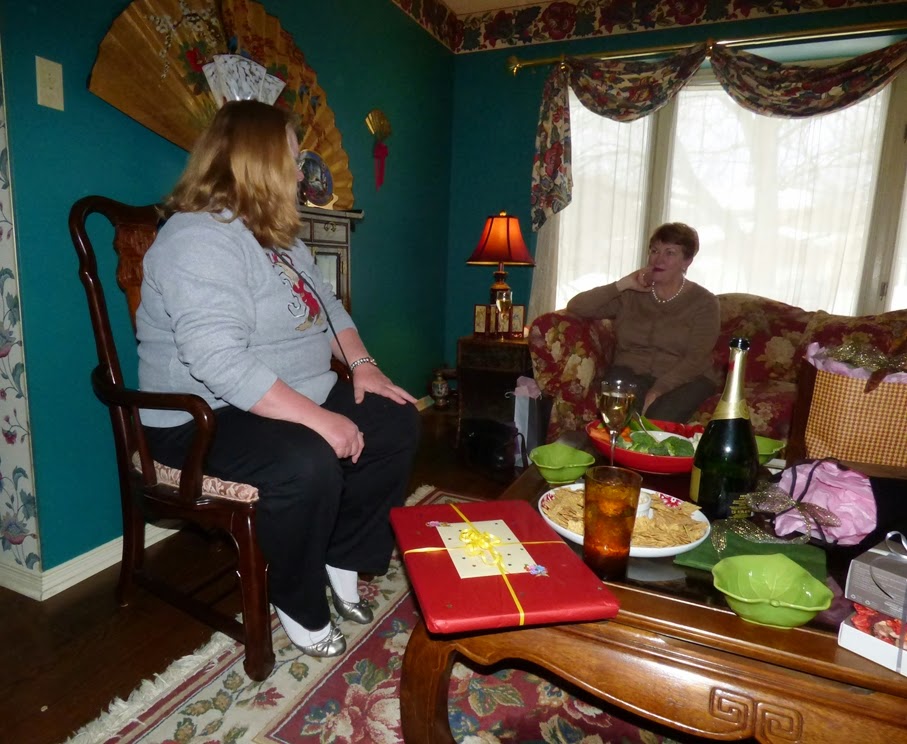 Here Val and Renate catch up with each other before opening their gifts.  My friend Susan was also in attendance, but as she was sitting beside me, I inadvertently neglected to take her picture ... 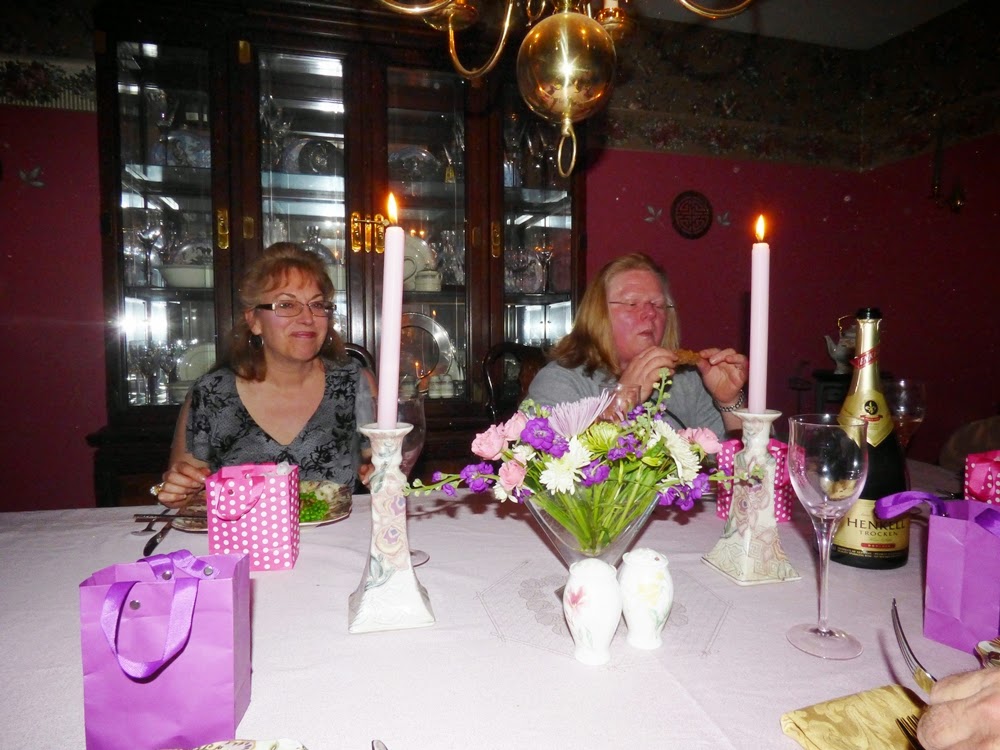 ... until we were seated at the dinner table.  There's Susan smiling back at me after having a mouthful of my delectable fried chicken!  Val seems to be enjoying hers as well. 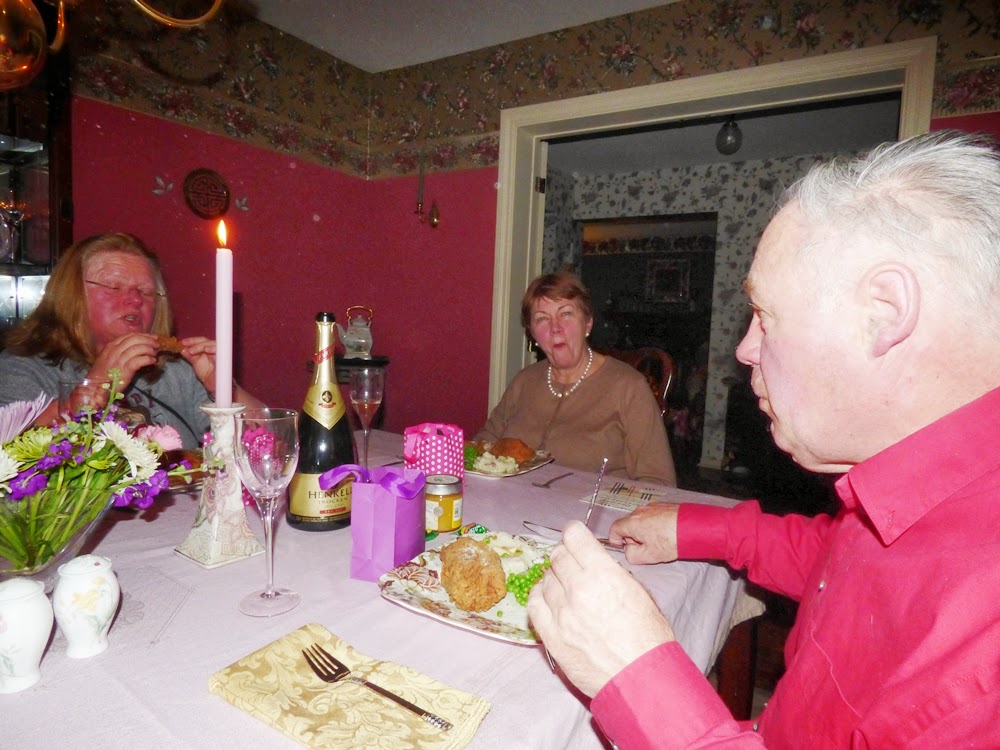 In fact, many of the pictures I took at the table, show the guests' enjoyment.  They told me this was the best fried chicken I had made yet!  I serve it to them every year for their birthdays because they like it so much.  It has become an annual event. 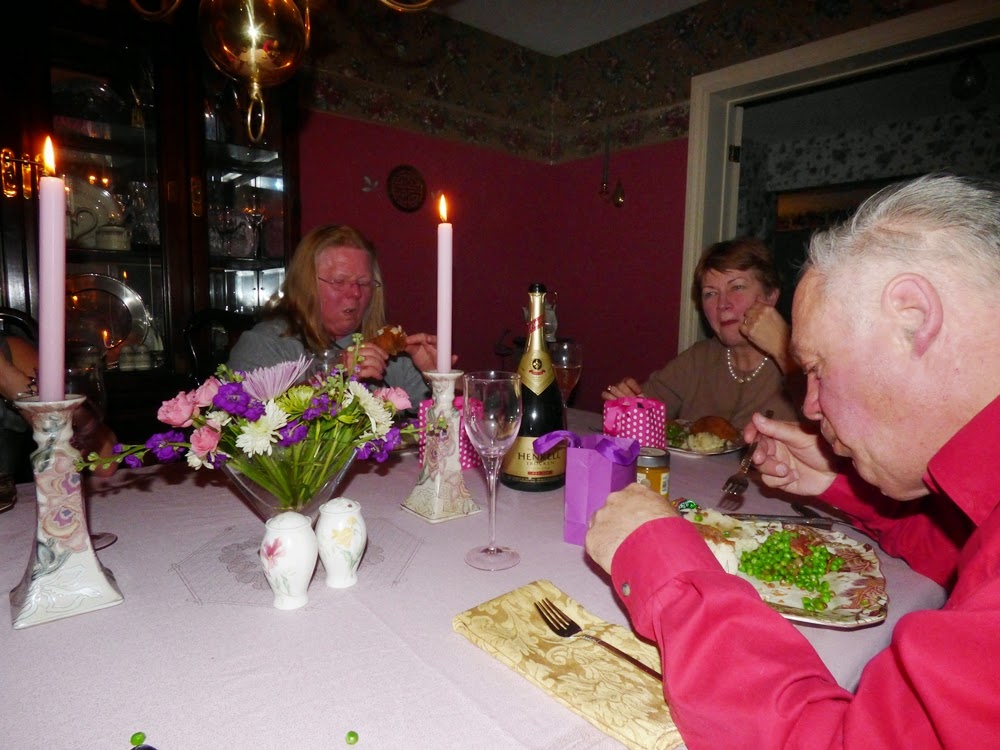 Here are yet more funny fried chicken faces!  I served smashed potatoes with sour cream, butter and green onions, and peas with bacon and shallots as accompaniments. 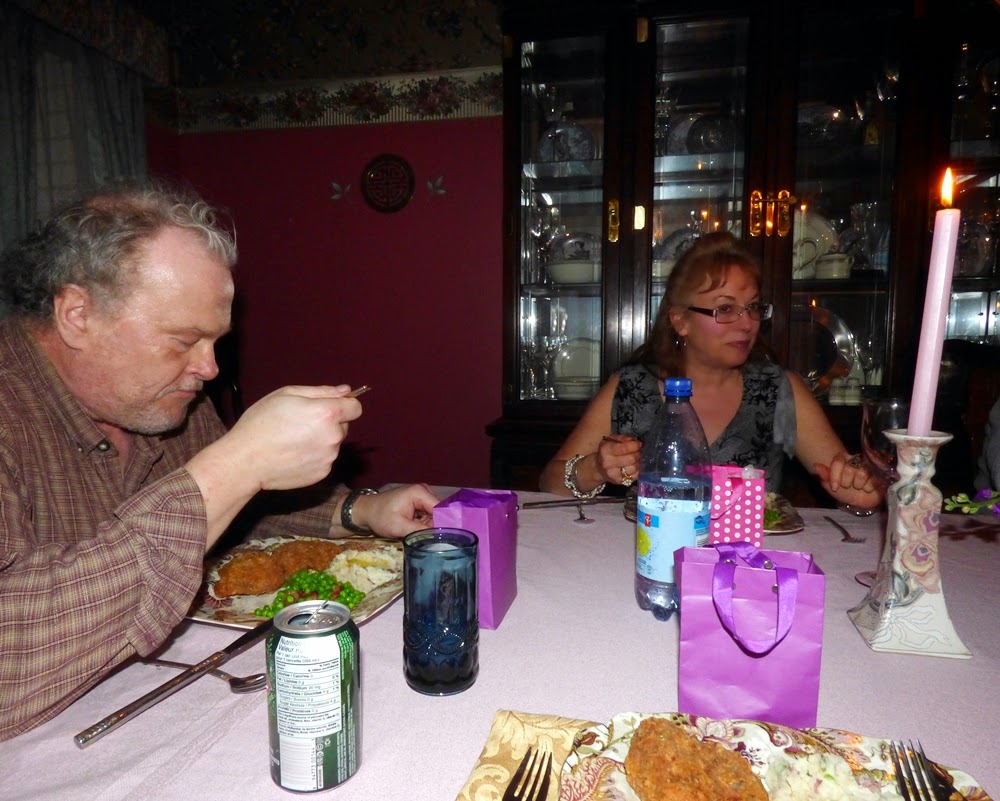 This is my husband, Walter enjoying his meal, and Susan taking a pause between bites.  I also made up little gift bags for each of us.  I filled them with luxurious Italian soaps, sugar-free chocolates and jokes that I made up myself. 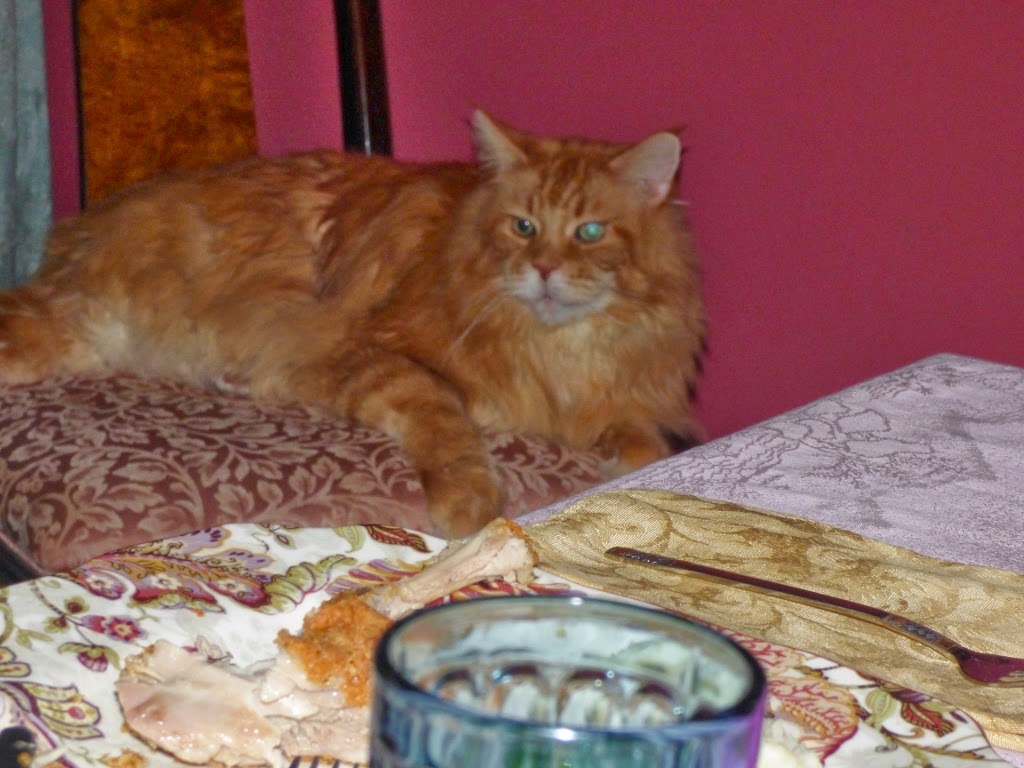 Dante made an appearance at the party, too.  He's got his eyes on his Daddy's chicken.  You can see how moist and juicy it is!

Not to worry, though, because I cut up some of mine for him.  Dante's a real chicken connoisseur and he gobbled it up lickety split! 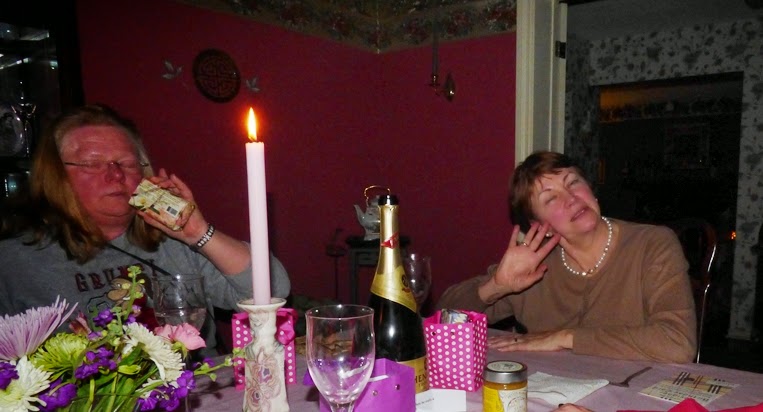 Here Val is smelling her gift soap.  Hers had the fragrance of Oleander, Muscat and Fig (quite unique!).  Seems like Renate was getting a whiff of it, too! 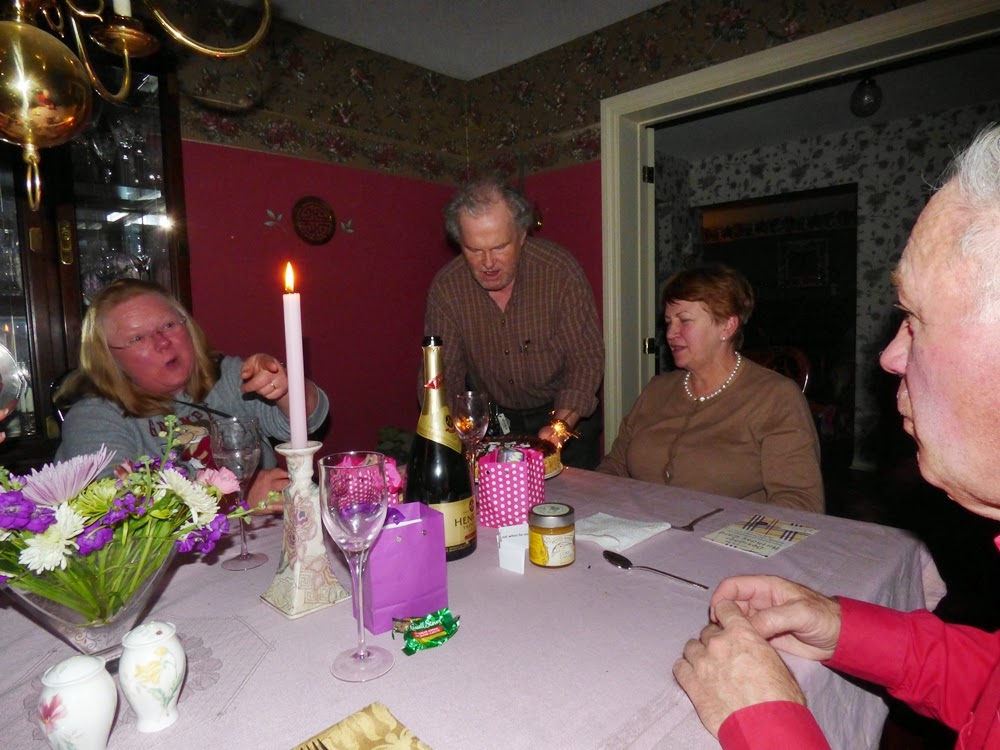 And here comes Walter with the Baskin Robbins Ice Cream Birthday Cake, complete with three sparklers -- one for each of the sparkling birthday guests. 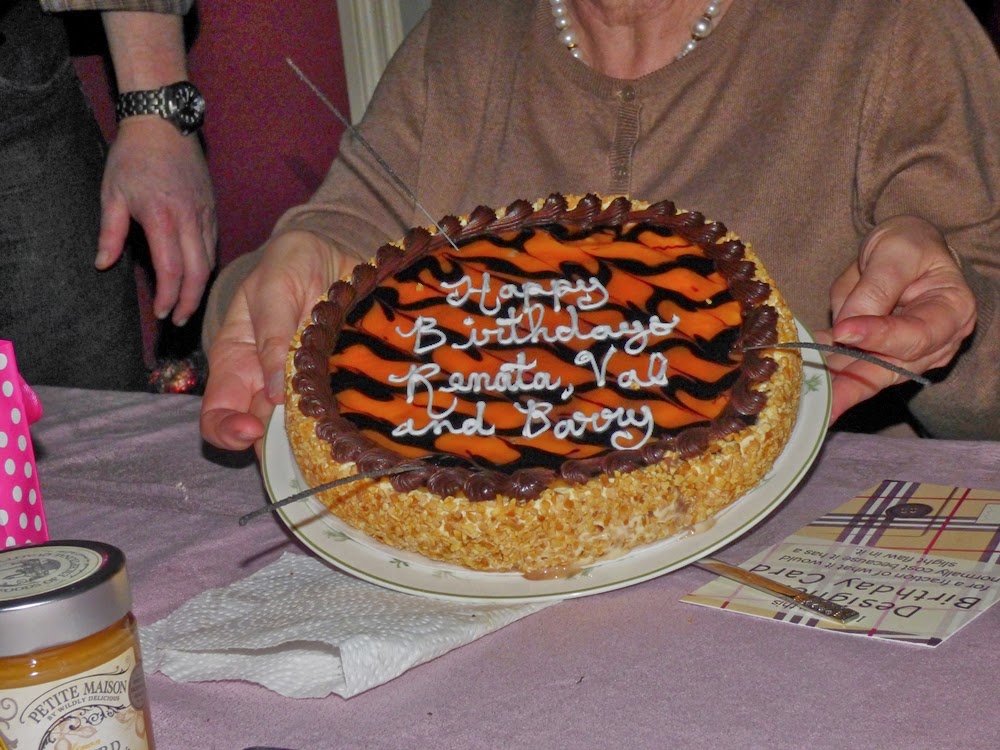 The cake was Pralines 'n Cream which everyone thoroughly enjoyed.  In the bottom left corner you will see a jar of lemon curd, which was my brother's birthday bag gift (as I didn't think he'd appreciate soap).

And hereunder is just a sampling of the jokes that I had also tucked in each of the gift bags.  There were three for each person.  I tried to PURRsonalize them as best I could.

Q.  Why did Renate throw off the covers when she thought she saw a ghost?

A.  Because she was ‘scared sheetless’!

Q.  Why did Barry have a hard time tracing the Lemon family?
A.  Because they were actually LIMEYS.
(Barry is a genealogist and is currently tracing some relatives of ours with the surname "Lemon" who originally came from England -- ergo they are "Limeys".)

Q.  Onboard ship, where did Val go when she needed to relieve herself?
A.  The ‘poop’ deck!
(Val just returned from her first-ever cruise to the Caribbean.)

And Domino -- always the thoughtful hostess -- returned when it was time for tea.  Isn't she just the sweetest thing ever?

Dante, who was not to be outdone, returned with seconds of the cake and led a round of 'Happy Birthday' in triple time. 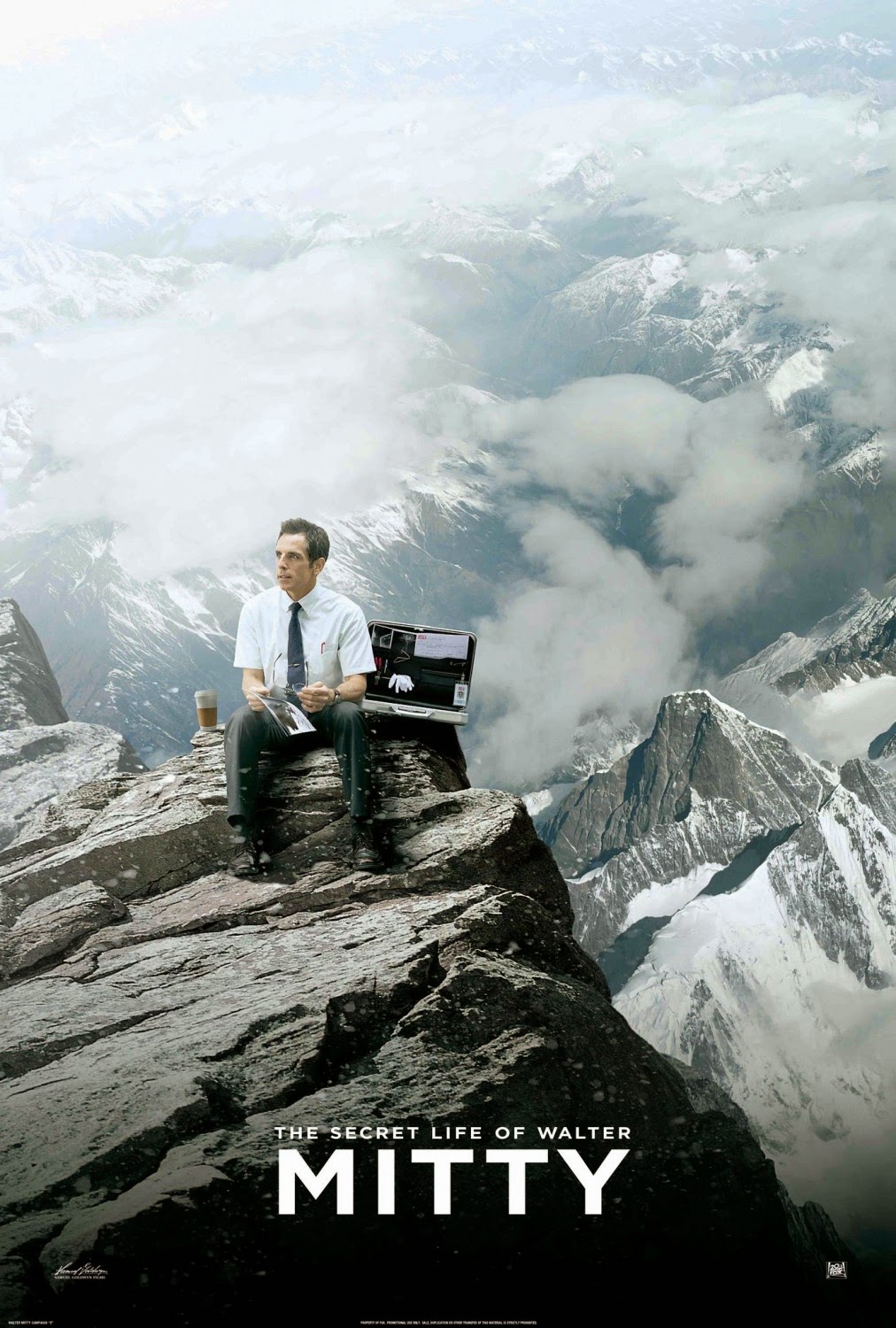 After dinner we all hunkered down to watch "The Secret Life of Walter Mitty", and it was a movie that all of the guests enjoyed (it's a rare thing to find such a consensus!). 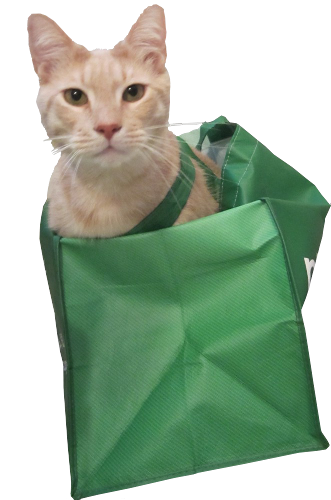 During the film Dylan deigned to join us and did several drive-bys for pats.  He even made his entrance in a gift bag in honour of the birthday guests.

Domino did laps, as usual, though she preferred to read a book rather than watch the movie.  She has standards to uphold, after all.

So we hope that everyone at the party enjoyed themselves, especially the birthday folk.  Maybe next year the chicken will be even better (if that's possible)!