EASY ON SUNDAY WITH DYLAN: STROLL ALONG WITH ME!

Dylan is taking a leisurely Sunday stroll in his "PURRAMBULATOR" with a few of his furiends to keep him company. 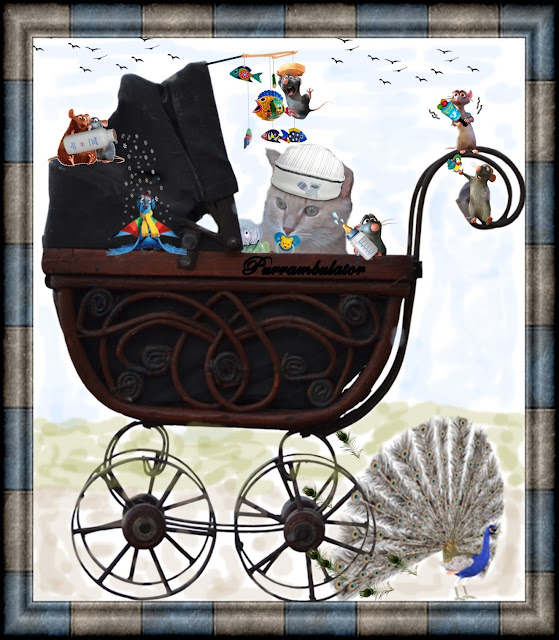 Dylan's a sucker for a PUSSifier.  He finds it so relaxing.  His PURRambulator helps to him keep mobile in more ways than one. Yes those fishies certainly are amewsing, not to mention his rodent furiend who's swinging from the stroller mobile and shouting "Cheese" for the camera!  "It's de angle of de dangle dat keeps fings goin'", says he.

As if all of that wasn't entertainment enough, two of his ratty furiends have conspired to sprinkle baby powder on Mr. Bluebird.  Lucky that birdie has worn some protective clothing!  Another rat (he's just a little squirt) is at the ready with refreshment whenever Dylan gets thirsty.  The baby bottle is filled with special cat milk from the pet store.

A fourth rat furiend is helping Dylan move along by shaking and rattling as they roll.  The fifth one has offered up a miniature parrot for a snack.  Gotta watch those calories, y'know!  At least it's high in PURRotein.

And if they ever need a brake, their fine furiend The Peacock has sacrificed some of his feathers so they can safely come to a stop.

Wow!  Who needs an amewsement park when you can just park your stroller and enjoy the company of your furiends?

For those born in July, like Dylan, it's an A-STROLL-ogical wonder!