Domino and Milo have travelled from Sidmouth, Devon (where Milo lives), to just beyond the Scottish border for their vacation.  They took a long leisurely drive enjoying the scenery along the way, but now they are exhausted. 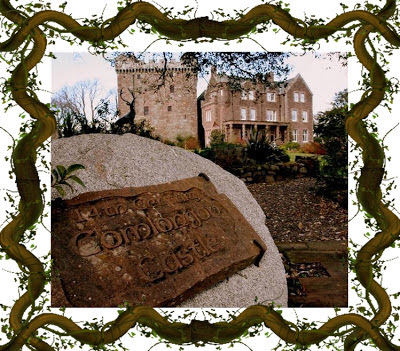 Lucky thing they have a booking at Castle Comlongon in Clarenfield, Dumfries Scotland.  They're really ready for a good night's sleep.  And tomorrow they will indulge in all the luxuries that this luxury hotel affords.

Comlongon Castle in Scotland is a restored 15th Century Medieval Scottish Castle which is now being used as a Wedding Venue and luxurious Baronial Hotel with 14 individually themed luxury en-suite 4-poster bedrooms and Honeymoon Lodge.  Click here to read more about the History of Comlongon Castle.

One of the most fascinating things about Comlongon Castle is it's ghost!

" It was reported on September 25 1570 that the Lady Marion Carruthers "did willfully take her own life by leaping from the lookout tower of Comlongon Castle and did break her head and bones". It's no surprise to learn that grass refused to grow on the spot where the cruelly imprisoned young woman struck the ground or that her sorrowful spirit still stalks this luxurious medieval castle on the Scottish borders. The fact that her ghost is green, smells of apples and moves jewellery around rooms is perhaps a little bit special.

Because suicide was suspected at the time poor Marion was not given a proper Christian burial and so it is believed that she haunts the castle forever looking for a proper resting place." 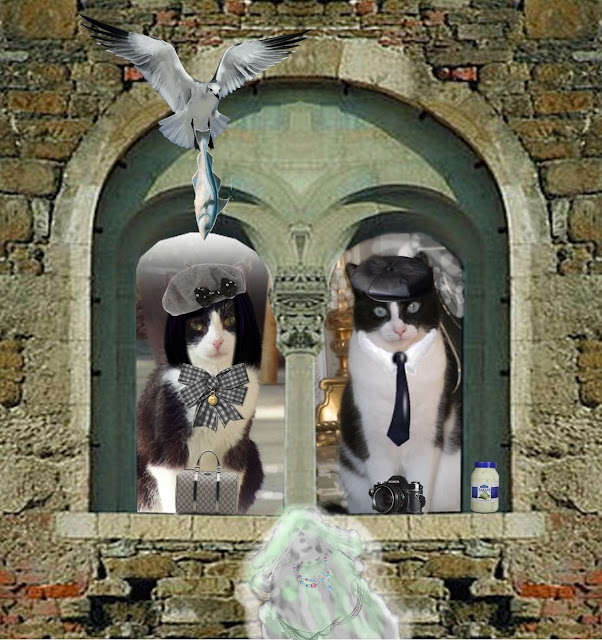 (Biggify for greatest detail)
Domino and Milo are enjoying the amazing view out one of the castle windows, totally unaware of what is going on just outside.  Milo says "I doan beleefs in ghosts.  It's all jus' sum story made up fur visitors."
Domino says "I smell apples!"

Little do they know that just beneath them this castle's ghost is getting a special delivery of fresh fish  -- thanks to Mr. Seagull.  Lady Marion's ghost is holding her net so that she can catch it.  She's even got a bottle of tartar sauce ready on the windowsill.  You may also note that she is wearing a necklace.  I wonder if it's really hers or did she pilfer it from some unsuspecting guest?

Speaking of pilfering, here is Lady Marion moving stuff around in one of the guest rooms.  She's very attracted to jewelry and likes to try it on herself.  If only she could see herself in a mirror!  Ah well, such is life after death. 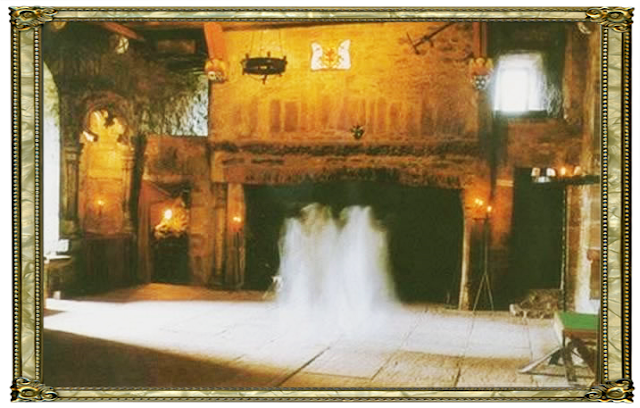 According to the Comlongon Castle website, this is an actual picture of their ghost who made an appearance in the Great Hall.  Sightings are quite common apparently, but pictures are more rare.  Perhaps Milo should keep his camera at the ready! 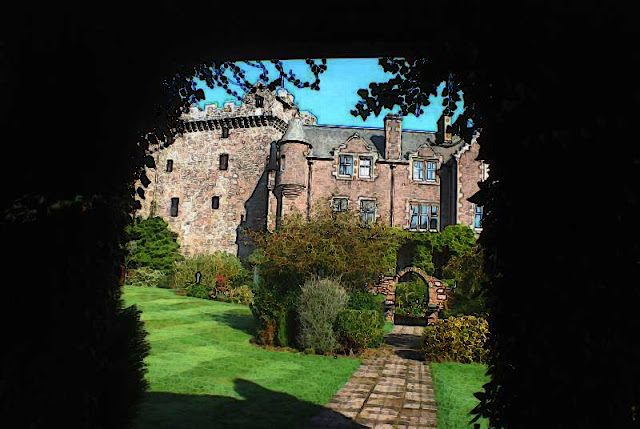 The grounds of Comlongon Castle are very beautiful, and picture-PURRfect for wedding photos, or for any occasion for that matter. 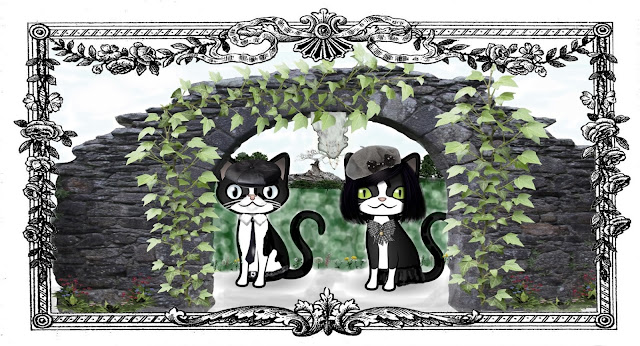 Milo and Domino had their picture taken, too, against one of the stone arches on the grounds.

Oh no!  That pesky ghost is hanging upside-down in the middle of the shot, dangling yet another stolen necklace no doubt.  That Lady Marion sure loves a photo op!

Well at least now Milo and Domino will have proof PAWSitive that she exists. 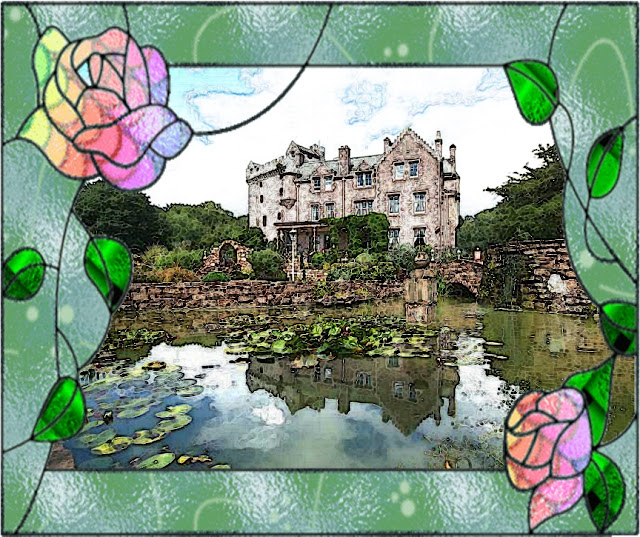 This is a photo from the back of the castle.  You can't get much better than this as a backdrop for a romantic occasion. 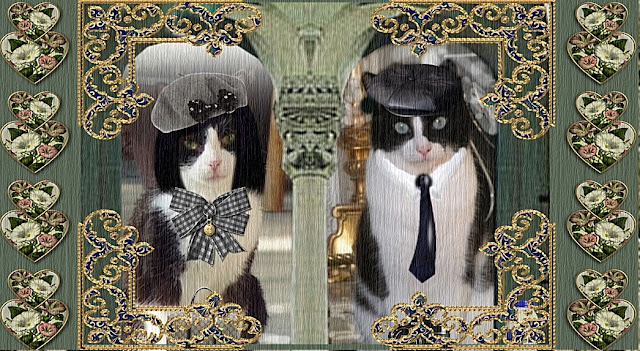 Domino and Milo had one last picture taken inside the castle.  Domino sighs "Maybe someday we can come back here for our own wedding, huh?"

Milo says "I think there just might be a ghost of a chance, my dear!"