You may recall that Domino and Dylan's relationship has been very rocky over the years -- mainly due to the fact that Dylan likes to jump on Domino and torment her.  He has been a real pest!

So, I couldn't believe my eyes, when I went outside on the deck and saw this! 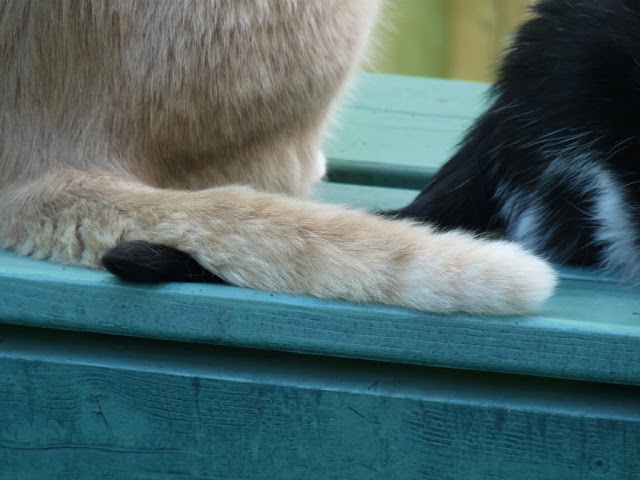 I did a double take!! 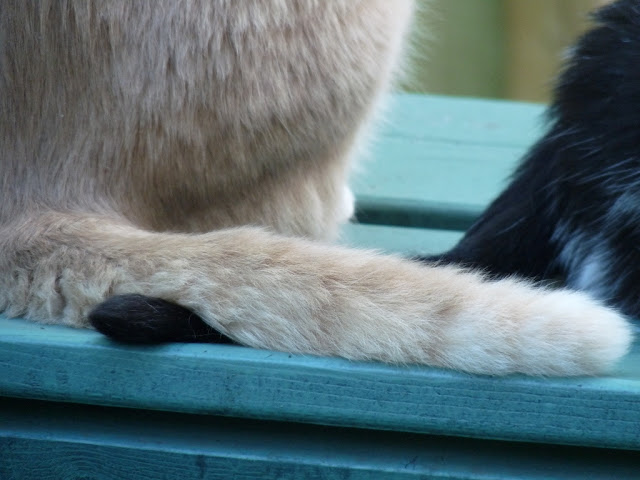 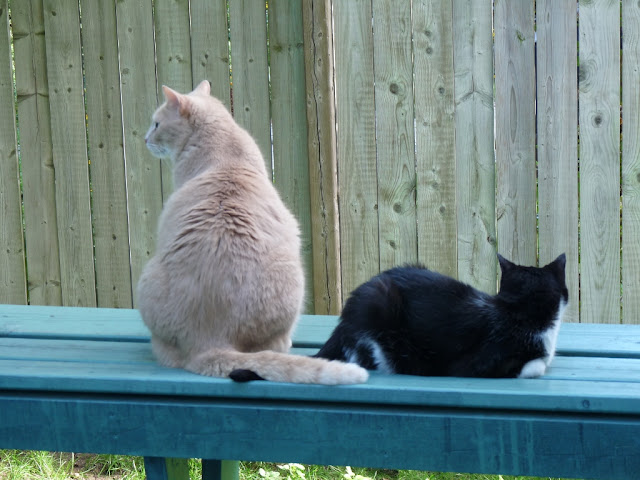 We had tried calming collars for awhile, with limited success.  And finally, we went for a Feliway diffuser ... 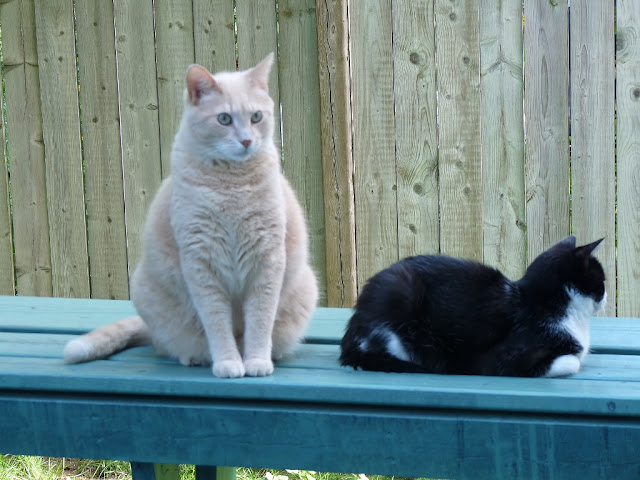 ... I tell you that thing is like magic!  When we first plugged it in (the electric outlet, of course -- not the kitties) all three of my cats honed in on it right away.  They would all settle down on the round rug in the foyer just inches away from the diffuser -- and they all looked so very peaceful.  We really knew it was working when we didn't hear any more high-pitched yowls out of Domino for weeks at a time. 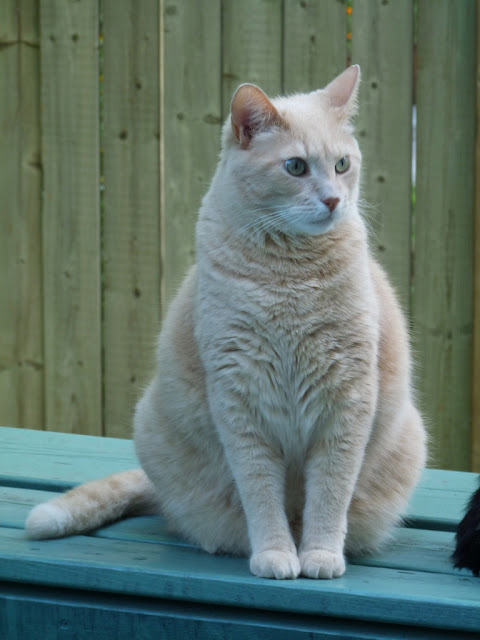 Well, back to Dylan.  He looks like he's pondering what to do next. 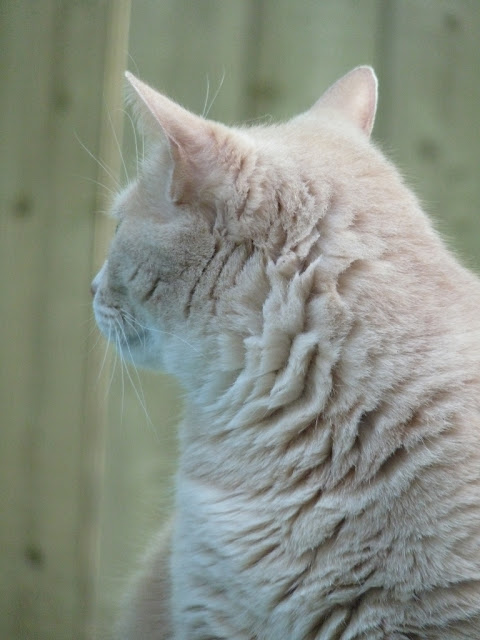 He looks around to see if anyone is watching. 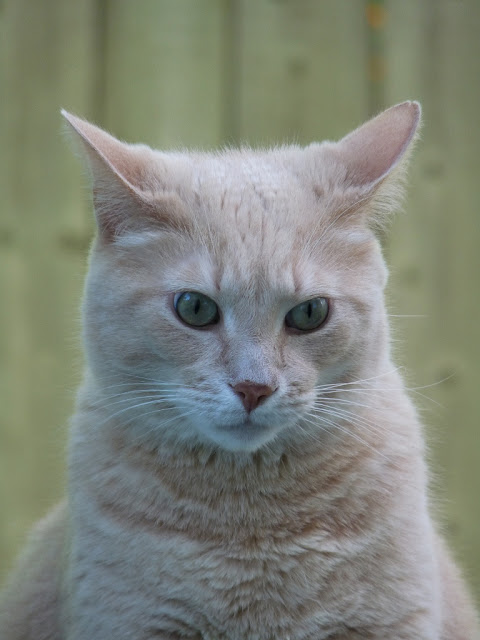 He's fighting off that little devil inside him ... 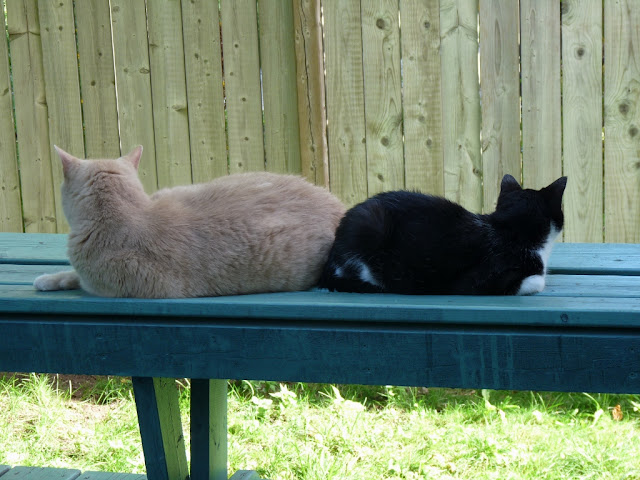 ... and finally decides to lie down -- cheek to cheek with Domino! 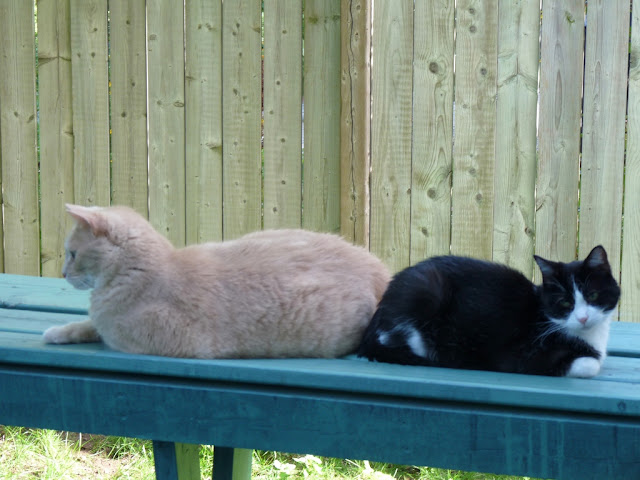 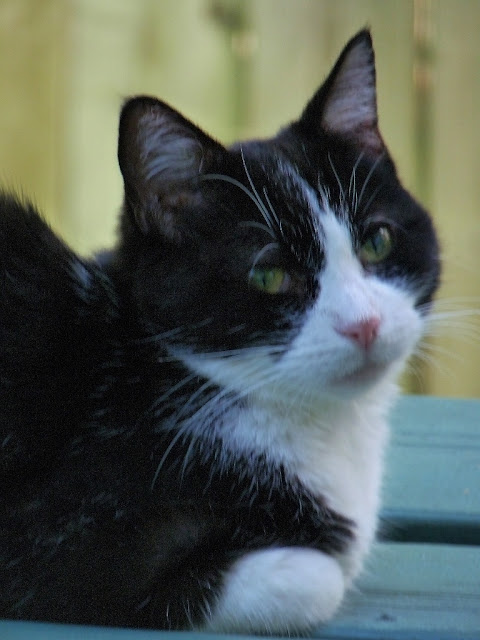 "It shur is nice ta haff piece of mind -- instead of giffin' it!" 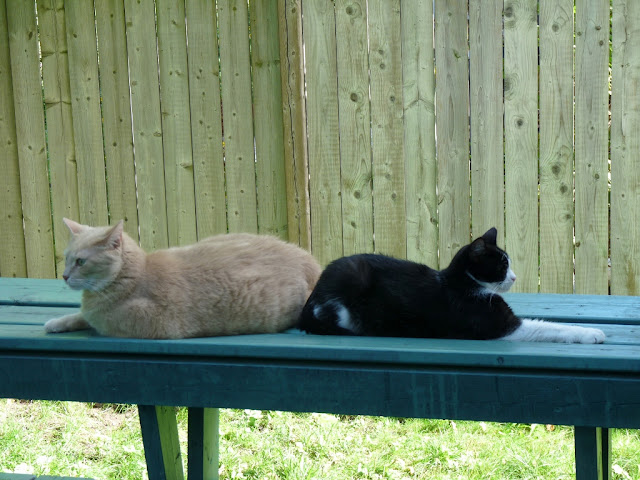 Domino sighs with relief and relaxes. 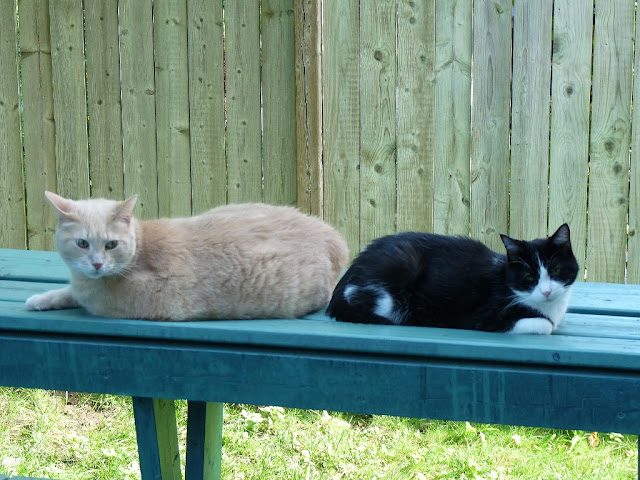 Who ever would have guessed that some day these two would be ... 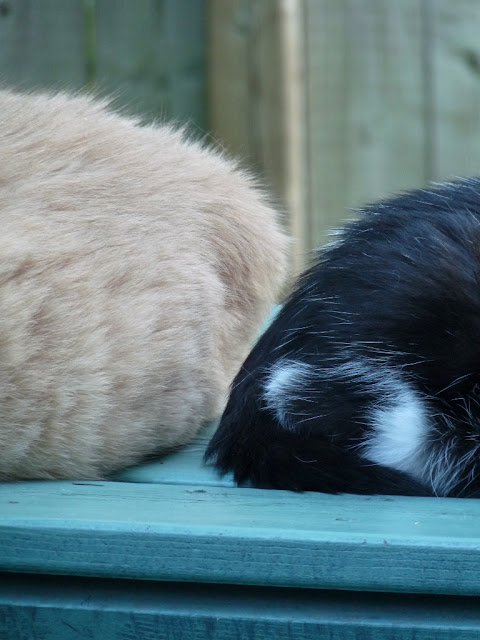 Did you have to get more than one for the whole house? I have tried the collar and treats but Kirby still jumps on Angel and makes her scream. He even bites!

That is one cute post especially the crossed tails. Well done you two.Love it. Poor Domino, we sure hope that big ole Dylan doesn't jump on you any more. Love the pictures and so glad you two are getting along. Take care.

That is sooooo wonderful and sure makes me smile!

de smell oh trout will calms a kitteh everee time.....sew yur deefuzer did smells like a trout ...didn't it !! ???

Wow - amazing to see them so quiet together.

Thank COD the diffuser got plugged in the correct receptacle!

Wow, that IS amazing!

Now that is truly impressive!!!
The photos are nothing short of fabulous!
It's hard to pick a favorite - I just might like the crossed tails the best. Talk about symbolism!

This post is making us smile today.
: ) Katie & Glogirly

That is so great! Me is going to has to gets me one of those! The Calming treats works for me, but Kozmo won't eats them!
Kisses
Nellie

Domino is really petite! We are glad they are getting along. The diffuser didn't help with Julie & Mica Moo.

Wow! We are impressed!

You guys look like bestest pals! Hooray for Feliway!

"Best BUTTIES!!" MOL!! This sooooooooo made my day!!!
Too adorable!

That's great that they are together and he's not bothering her. Moony is like that with our girls. Then we'll see them close together being friends! Good boy Dylan! :)