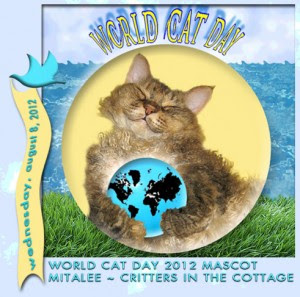 Today is World Cat Day and while we celebrate every cat on earth, we are also focusing on those who are nearest and dearest.  So I have chosen some of my favourite pictures of the kitties in my life.  And since I've gone mad for avatars, I've included those as well. 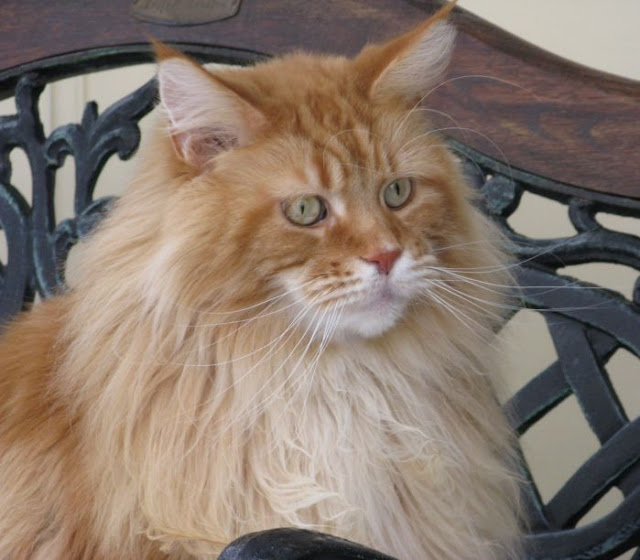 Here is Lacocoon Dante -- my own PURRsonal lion.  He is a very gentle lion, though, with a rather laidback PURRSonality.  He allows me to dress him up, and will quite comfortably wear the outfit around all day without complaint.  Dante loves to give and receive kisses and is quite sociable.  He also loves dogs and will even lie down and expose his belly as an invitation to play. 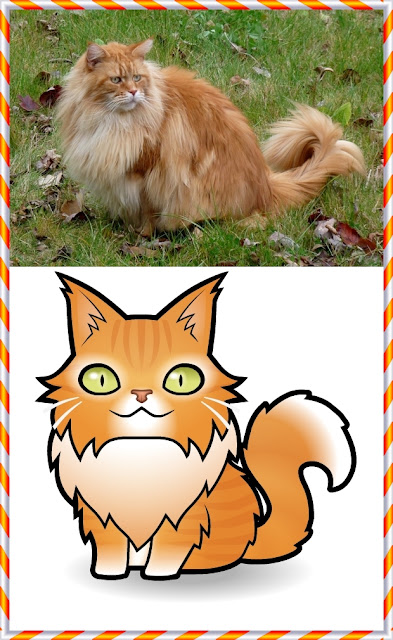 Dante in full coat is a sight to behold! 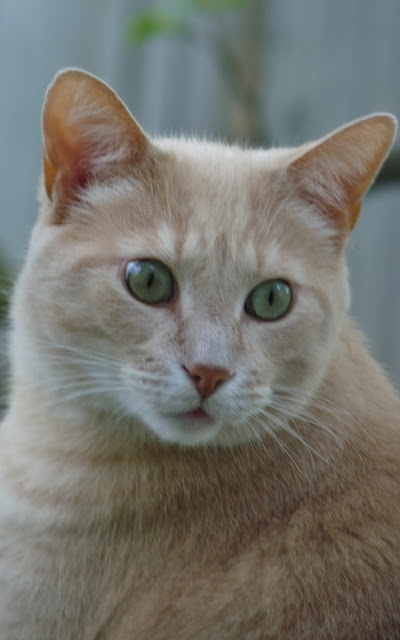 Dylan is rather high-strung.  He seems always to be on alert.  Any sudden noise alarms him, although he loves the quiet purr of my massager aka "ThumPURR".  He will come running when he hears me using it and jumps up beside me begging to be thumped.  The silly boy even likes to have his head thumped, though I fear it will rattle his brains even more.  Dylan is a sweet-natured goof.

Dylan is so very creamy and plush!  Plushious, I call him. 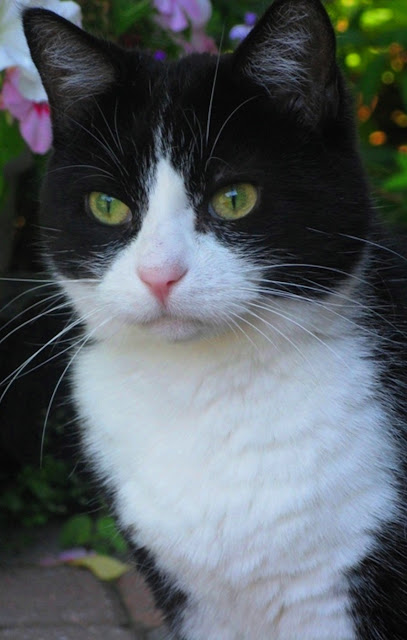 Domino is a natural beauty and her modelling abilities are renowned.  She also has one of the feistiest temPURRaments I've ever seen in a cat.  While she can be very loving and affectionate, she can also turn in a moment and give you a swipe if she thinks you deserve it.  She rules her brothers with an iron claw.  Although she tolerates dogs quite well, she will do the same with them if they invade her PURRSonal space too closely.  There are rules to having an audience with the Queen, after all!

Domino is the PURRfect model whether in a fashionable frock or 'au naturel'! 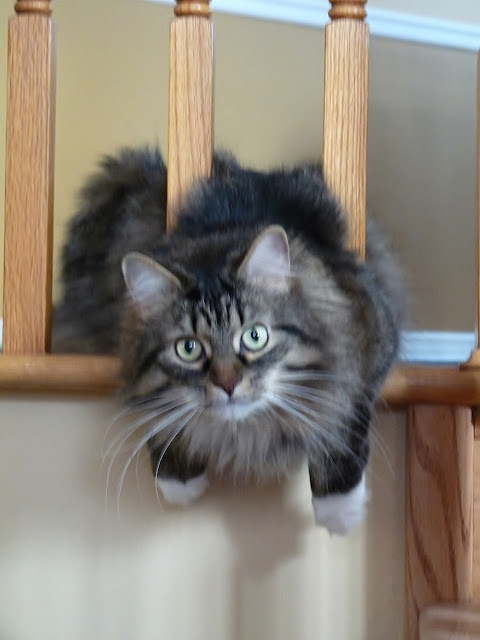 Sox is a handsome 4-year old long-haired brown tabby with white feet.  While he can be more aloof, he has his cuddly moments and likes to sleep with his Daddy at night.  He's a bit of a clown and likes to arrange himself in odd positions.  He is quick as lightening and sees an open door as an invitation.  He also likes heights and will scale them at his own peril, balancing on very narrow second story windowsills, for example.   While babysitting him at my house, he has fallen from on high more than once, but always makes a quick recovery.  It certainly doesn't stop him from doing the same thing again. 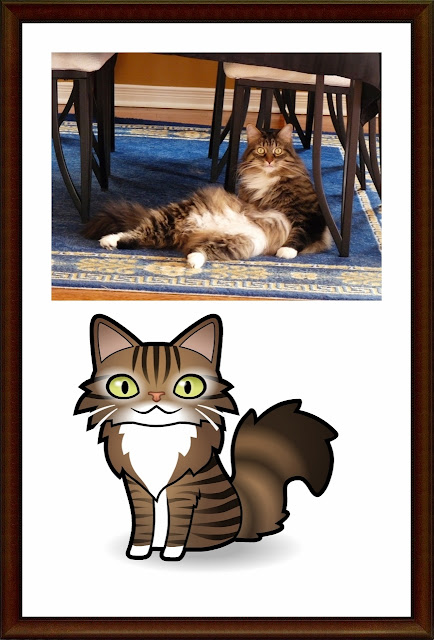 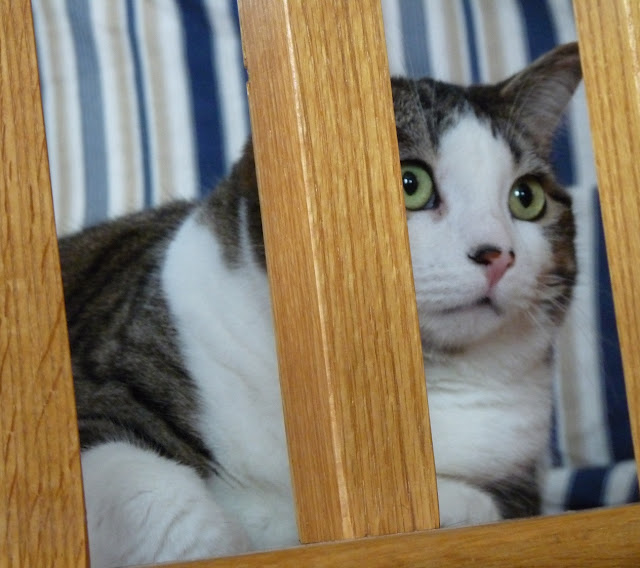 Missy is a 4-year old female brown tabby with white.  She and Sox were adopted together as tiny kittens.  Missy has a bit of a weight problem, but she doesn't let it stop her from doing anything.  She still gets plenty of exercise running around after her brother.  She is extremely affectionate and will demand your attention when she wants it.  Missy is very loving when at her own house, but when I babysit her at mine, we affectionately call her 'Hissy' because that is what she does to everyone -- feline and human, alike!  Domino just tends to ignore her, but Missy tries to dominate everyone else.  Returned to her own home, she becomes laidback and friendly once again. 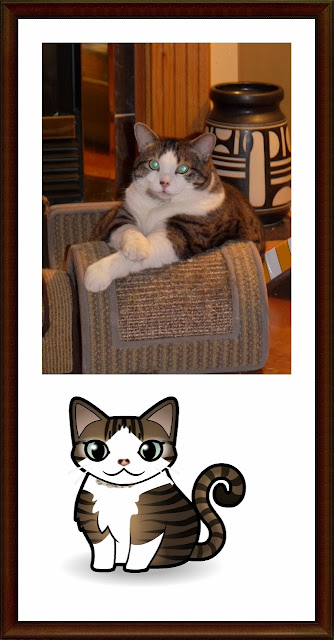 Missy says "Yes to the ESS"!  It's her favourite place to relax.

This post would not be complete without wishing a Happy Birthday to my favourite Crazy Cat Lady -- Carm!  I think it's no coincidence that her birthday and World Cat Day are one and the same.

Carm has had some real trials and tribulations this year battling Multiple Myeloma.  Please go and gives her your best wishes on this special day. 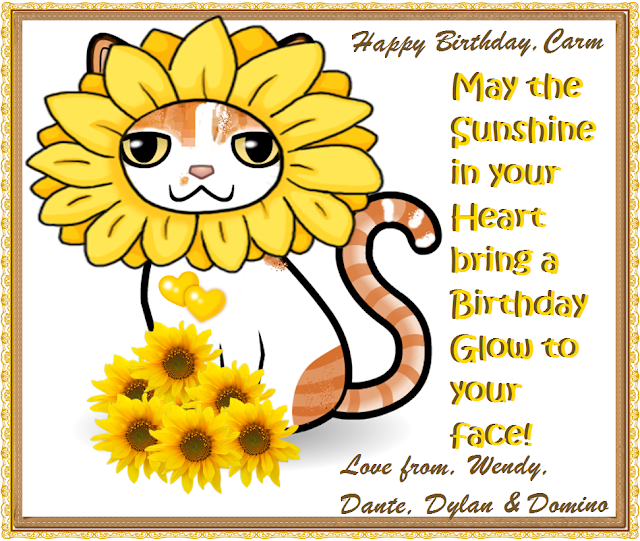 And so, in closing -- from all of us to all of you, Happy World Cat Day!  And thanks to the Cat Blogosphere for bringing us all together.
Posted by CCL Wendy at Wednesday, August 08, 2012

What a great post, Wendy. Loved all the photos and the terrific avatars too.

Happy World Cat Day to you all!

Thanks for everything Wendy! LOVE your World Cat Day Post! Great photos and Avatars of your kitties. XO CCL Carm

Such a gorgeous, gorgeous bunch! Happy World Cat Day everyone!

That sure is one handsome and pretty herd of cats. We do think all of you are great and it is fun to meet the grandchildren cats too. The perfect Happy World Cat day.

You know, so often cats just get lumped together by people. We always enjoy how each of us has their own purrsonality. It's especially nice how you have shared the purrsonalities here. We really like that. And on World Cat Day - excellent!

Hugs and wuz to all you handsome and beautiful furriends! And extra kitty kisses to your wonderful Mom.

Happy World Cat Day!
We loved learning all about you gorgeous kitties!
Now be sure your Mama gives you a few extra treats on your special day :)


the critters in the cottage xo

Happy World Cat Day! It is was great to see my favorites Dante, Domino and Dylan, but the grand Kitties too! T|hey are all the bestest!
Kisses
Nellie

Happy World Cat Day to all of you!!

Happy World Cat Day! I love all of your pictures and avatars!

Whoa--those is some fine-looking kitties (efun the ManCats). Hope you all had a wonderful World Cat Day filled with toys and treats and nappies!

A great post and beautiful family!...So nice to meet the lovely grandcats too!...Halle is just so happy handsome Dylan is her "goof" :) ...Have a fun day, sweet friends...xoxoxo...Calle, Halle, Sukki